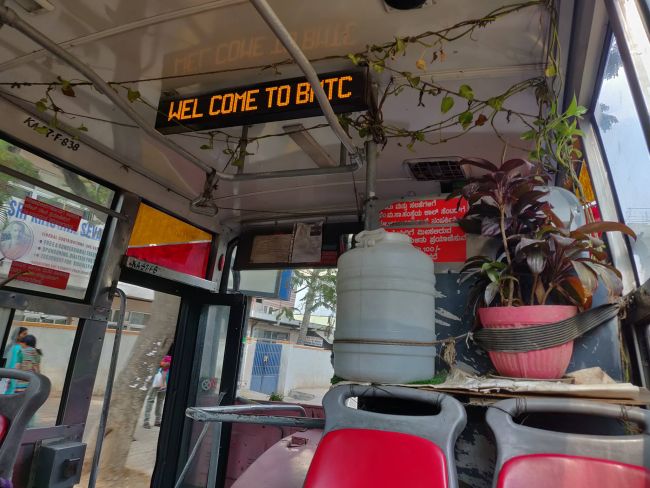 New Delhi: When we think of an experience in a bus, what is the first thing that comes to your mind? Maybe a picture of a bus conductor running back and forth asking people which route’s ticket they want or a huge pile of bags lying in front of the bus or even hustle bustle of the travellers? Away from all this and to change the typical bus ride experience for its commuters, a Bangalore Metropolitan Transport Corporation (BMTC) bus number KA07-F-838 that travels from Kaval Bylasandraa to Yeshwanthpur is doing something unusual.

On entering this bus, passengers will be surprised to see a mini garden installed within the premises and will be greeted with creepers and blooming flowers. Courtesy – the 59-year-old bus driver Narayanappa who has served in the BMTC as a bus driver since the last 27 years and has transformed this typical bus ride into a green ride. He had purchased a few saplings two years ago to keep in his bus to start his green journey and today he has some 14 plants places both at the front and at the back of the bus.

Also Read: This 20-Year-Old Upcycled School Bus Is An Inspiration For A Sustainable Future

Narayanappa says his wife and children inspired him for this green initiative. He added,

In our house, my wife and children make new additions to our little garden every now and then. It was they who inspired me to build a mini garden inside the bus. With this move, I want to spread the word about keeping the environment green and healthy. If this small move of mine even inspires one of my daily passengers, it will mean a lot.

Narayanappa’s efforts are currently being appreciated by a lot of Bangaloreans, some passengers even call it a ‘Mini Lalbagh’.

Recently, Pushpa Preya boarded the ‘Green’ bus and was super impressed with the efforts. She posted a few pictures of the bus on her social media and said,

Never have I ever thought of experiencing a mini-garden inside a bus. It is such a simple way of spreading awareness, hope there will be more people like Narayanappa in this world.

Narayanappa will be retiring at the end of this year, all he currently hope is to inspire the other conductor who will be joining duty after him so that this green deed continues to inspire hundreds and thousands of people in the city.