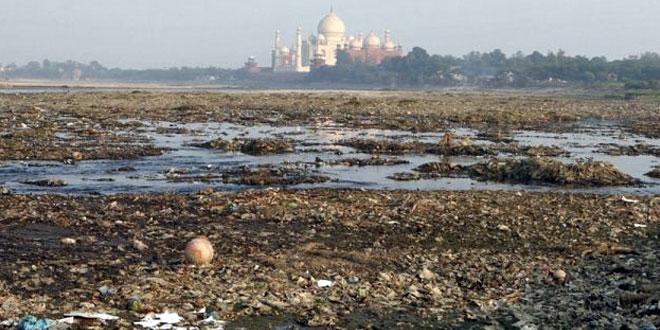 New Delhi: The National Green Tribunal (NGT) has termed the condition of drinking water supply, sewerage, drainage system and solid waste disposal in Agra as “shocking” and sought a report on the issue within two months. A bench headed by NGT Chairperson Justice Adarsh Kumar Goel constituted a committee comprising Chairman, Central Pollution Control Board (CPCB), a nominee of National Environmental Engineering Research Institute (NEERI) and the Agra District Magistrate, Agra to ascertain the factual position with regard these issues. The green panel said the CPCB will act as a nodal agency and will inform other members and a report may be furnished within two months by e-mail.

We are satisfied that since earlier report of the NEERI was 20 years back, much water has drawn under the bridges in the last 20 years. An updated report on the matter is necessary to deal with the current scenario, the bench said.

It said that although, a regional committee has been constituted by the tribunal to oversee compliance of earlier directions of the tribunal with regard to the implementation of solid waste management Rules, the panel for the North Zone covers a very long area and therefore a separate committee needs to be constituted for the purpose. The Uttar Pradesh government informed the tribunal that the problem of drinking water supply, sewerage drainage system and solid waste disposal has been considered and instructions issued. It said there are two water works stations in the city treating 369 million liters per day (MLD) water against the requirement of 400 MLD and after the new project is operative, the water supply shortfall will be covered. As regards the sewerage, it was stated by the state government that 514 kms sewer line has already been laid and the 336 kms remains while nine Sewage Treatment Plants are operating as on date.

Also Read: Garbage Piles Up In The City Of Agra, As Sanitation Workers Go On Strike Protesting Municipal Corporation’s Decision To Transfer Them

As regards municipal solid waste, the stand is that 19 nallahs (drains) are proposed to be diverted to STPs. There is a waste to compost plant under Agreement which is in operation for disposal of municipal solid waste. Five agencies are engaged for segregating the waste at source, it said.

The NGT had earlier restrained civic authorities from burning municipal solid waste and other waste in the open in Agra and the areas around the eco-sensitive Taj Trapezium Zone (TTZ). The tribunal was hearing a plea filed by NGO Social Action for Forest and Environment which contended that civic bodies in Agra were blatantly violating Solid Waste Management Rules as more than 2000 metric tonnes of solid waste per day was being dumped in various part of the city, besides plastic waste which was being consumed by stray animals.

“It is submitted that respondents are not segregating industrial, hazardous and bio-medical waste from Municipal Solid Waste and the same is being dumped in various parts of Agra for the last several years. “The drains and canals have been converted into sewer lines which fall directly into River Yamuna without any treatment by various authorities including Nagar Nigam Agra, Agra Development Authority, Cantonment Board and areas falling under the TTZ Authority,” the plea had said.