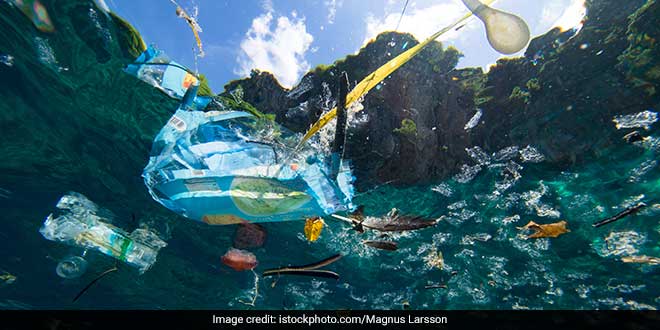 Washington: A 2,000 foot-long floating pipe nicknamed “Wilson” is slated to begin its mission to collect all the plastic in the middle of the Pacific Ocean. Last month, the Ocean Cleanup foundation launched the world’s first ocean cleanup system out of San Francisco to take on the notorious “Great Pacific Garbage Patch”, a giant floating trash pile between San Francisco and Hawaii that is twice the size of Texas, CNN reported on Tuesday.

It’s the largest of five ocean trash piles on Earth. The pipe is set to arrive at its destination in the ocean on Tuesday and begin the cleanup process soon after, according to a company spokesperson.

The pipe, which is in the shape of a U, features a 3-metre deep net underneath it to trap floating plastic under the water’s surface. A boat will return to the spot every few months to remove the debris, like a garbage truck for the ocean, and return it to shore.

The goal is to recycle the plastic and create new products.

With about 150 million tonnes of plastic in the world’s oceans, and that number expected to triple in the next decade, this type of trash disposal has real implications for climate change, the safety of sea life and industries such as fishing and tourism. It can also affect our health if plastic ends up in the food we eat.

It’s probably still going to be there in 100 years, so really only if we go out there and clean it up this amount of plastic is going to go down.

The Ocean Cleanup team has been researching and testing the pipe for the past five years. In 2013, the project raised over $2 million through crowd-funding and has since raised over $30 million.

The group hopes the pipe will collect 50 tonnes of trash by April 2019 and clean 90 per cent of the world’s ocean plastic by 2040.

India Aims To Cut Stubble Burning In Key States By 70 Per cent, But Experts Skeptical