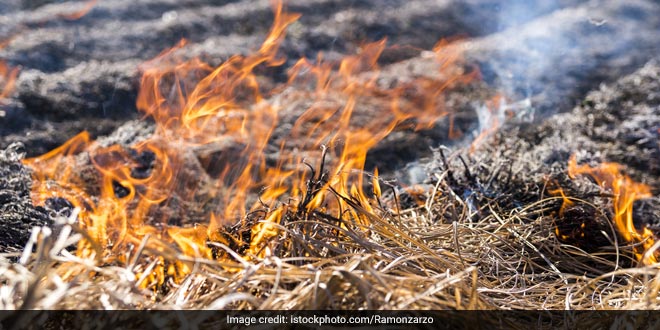 New Delhi: India aims to reduce stubble burning, a major source of pollution during the winter months, by 70 percent in its top two farm states this year, a top government official said on Tuesday, but experts questioned whether the target was credible. Stubble burning in Punjab and Haryana fell between Sept. 30 and Oct. 14 by more than 28 and 44 percent respectively from the year-earlier period, the official said. He didn’t wish to be identified in line with government policy.

The fires are expected to pick up in the next couple of weeks, hitting highs in early November, as farmers prepare the ground for winter planting. In recent years, the practice has helped create a thick haze of toxic smog that envelopes vast swathe of northern India, including New Delhi, the capital, during the winter. It has forced authorities to resort to emergency measures such as shutting schools and banning construction.

Also Read: This Group Of Ingenious Farmers In Punjab Have Not Burned Their Farm Waste Since Ten Years

Traffic pollution and a drop-off in wind speeds also contribute to the smog. The official said that the government was educating farmers about the problems of burning stubble as well as providing subsidies for equipment that would allow them to mulch the stubble instead. “Bringing down crop stubble burning by up to 70 percent seems like a tall order even though there are things happening on the ground,” said Sachchida Nand Tripathi, a professor at the Indian Institute of Kanpur in northern India, who works with the federal environment ministry on various pollution measures.

He said, It’s like a war, and a lot more needs to be done in terms of multi-agency coordination.

Fires on farms seen by a Reuters reporter last week in Haryana and neighbouring Punjab suggest that efforts by authorities to stave off a massive spike in pollution in nearby New Delhi in the next few weeks may fail. But much more is needed, said Anumita Roychowdhury, executive director of the New Delhi-based think-tank, the Centre for Science and Environment. As pollution levels climbed to 12 times the recommended limit last year, India introduced some measures aimed at curbing crop burning, in particular offering to pay for up to 80 percent of certain farm equipment.

India’s Central Pollution Control Board (CPCB) said it would ban garbage burning and enforce stricter regulations for brick kilns and industrial plants if the air quality worsens. The air quality index, which measures the concentration of poisonous particulate matter, has risen above 300 in parts of Delhi in recent days. Anything above 100 is considered unhealthy by the CPCB.