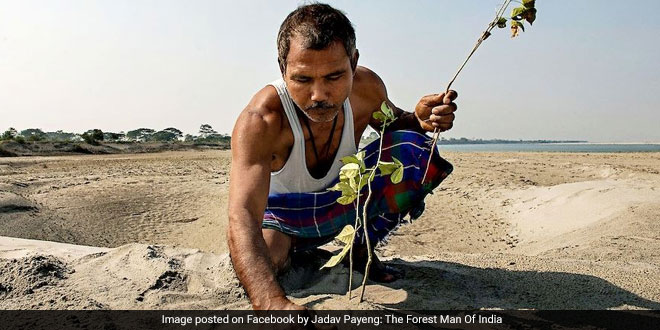 New Delhi: What does it take to transform a barren land into a forest? Apart from plants, it takes someone to take charge, work hard and demonstrate the will to continue planting and caring for the trees, against all odds. 56 year-old Padma-Shree Awardee, Jadav Molai Payeng is a farmer from Assam’s Jorhat who is also known as The Forest Man of India. 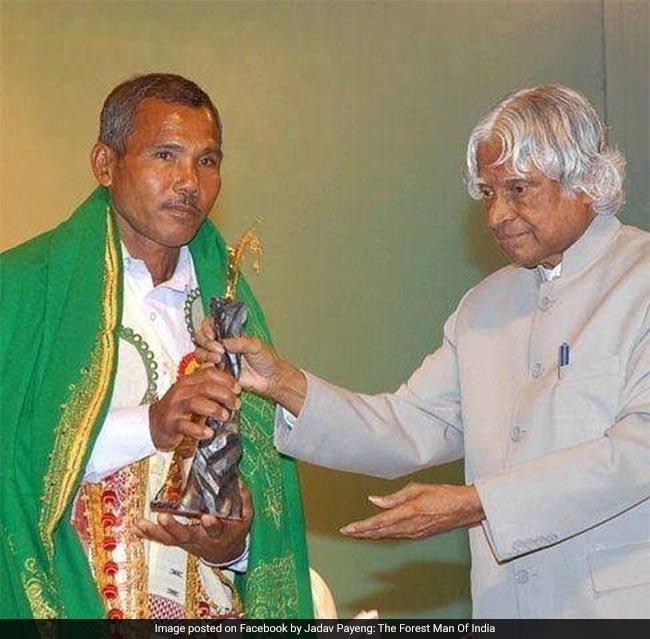 56 year-old Padma-Shree Awardee, Jadav Molai Payeng is a farmer from Assam’s Jorhat who is also known as The Forest Man of India

Mr. Payeng was 16 years old in 1979, when he witnessed a large number of snakes that had died due to excessive heat after floods washed them onto the tree-less sandbar. He told NDTV,

I had to do something about it. Not just snakes, all kinds of forest animals had disappeared from this area due to frequent flooding. I thought the only thing I can do is to plant trees and that is how I started, by planting around 20 bamboo seedlings on that very sandbar. 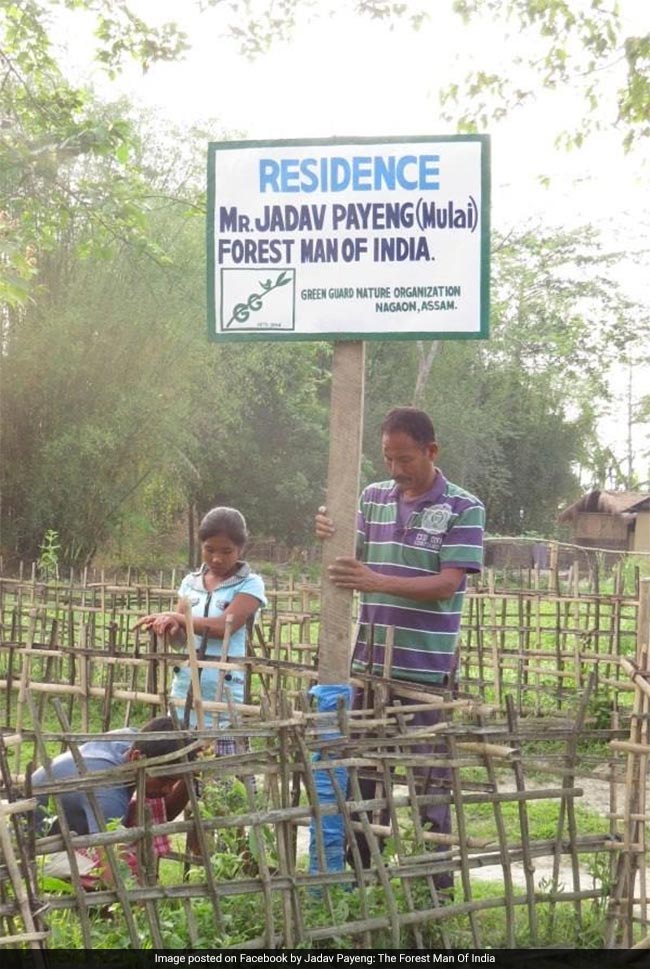 While his personal life also progressed with marriage and five kids, Mr. Payeng did not forget about his mission of planting trees

The Forest Man began his journey when the social forestry division of Golaghat district launched a scheme of tree plantation on 200 hectares at Aruna Chapori situated at a distance of 5 km from Kokilamukh in Jorhat district. He said,

I was one of the first few farmers who worked on that project when it began. Even though it got over in five years, I stayed back while others left and looked after the plants. I also continued to plant more trees on my own.

While his personal life also progressed with marriage and five kids, Mr. Payeng did not forget about his mission of planting trees. For 35 years, he would walk for 20 minutes, hop on a boat to cross the river, then walk another two hours to reach that very sand-bar, where he would plant trees every day for three months a year.

Where there is a will, there is a way, they say. Mr Peyang’s will led him to the way and today the barren land, where he once witnessed hundreds of dead snakes due to floods and deforestation, is a forest spread across 550 acres, thanks to his relentless efforts. The forest has been named as Molai Reserve, the word ‘Molai’ being his middle name. 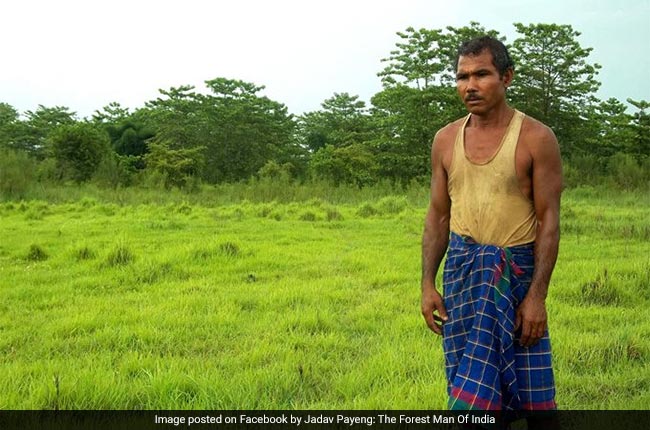 The Molai Reserve is a forest on the Majuli Island in the Brahmaputra River near Kokilamukh in the Jorhat district in Assam, India

The Molai Reserve is a forest on the Majuli Island in the Brahmaputra River near Kokilamukh in the Jorhat district in Assam, India. Spread over 550 acres, this ‘one-man-made’ forest remains under continuous threat due to the extensive soil erosion on its banks. But nature has taken it upon itself to take care of this forest now, Mr. Peyang tells NDTV,

Now the forest is in such a condition, that the trees drop seeds on the ground and grows plants themselves. That is how nature works, you help it a little, and it will help itself. I’m proud to say that what started with just me planting 20 plants is now the Molai Reserve which is twice the size of central park in New York!

I used cow dung and organic matter as manure to improve soil fertility; to water the saplings, I employed an indigenous drip irrigation method that uses dripped earthen pots placed on bamboo platforms; and I also released earthworms to prepare the soil,” he said. Earthworms burrow into the silt-hardened surface, making it porous and arable. They feed on withered leaves and convert them into organic matter that facilitates plant roots to go deep and feed on.

The forest also has a rich diversity of flora, including more than 100 species of trees and medicinal plants, including valcol, arjun (Terminalia arjuna), Pride of India (Lagerstroemia speciosa), royal poinciana (Delonix regia), silk trees (Albizia procera), moj (Archidendron bigeminum) and cotton trees (Bombax ceiba), among others. Bamboo alone covers an area of over 300 hectares. Not just that, thanks to Mr. Peyang’s persistence, animals like elephants, deers, tigers, rhino, among others, have started returning to the forest. 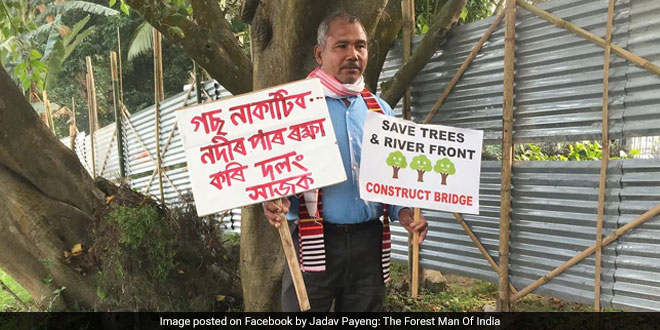 “I’m proud to say that what started with just me planting 20 plants is now the Molai Reserve which is twice the size of central park in New York!”

In addition, Molai Kathoni supports nearly 250 families who live in several clusters of about 12 huts. Most of these families belong to Assam’s indigenous Mishing community, a riparian tribe scattered across the state.

The people living around Mulai Kathoni are mainly livestock farmers, who earn a living by selling milk. Thickets of grass that intersperse with the trees inside the forest serve as grazing sites for the cattle raised by the locals and Payeng himself.

Without the forest it would have been very difficult for us to keep cattle and survive here because earlier it was a mere sandbar, said Taye, a local Mishing tribesman who’s lived on Aruna Chapori since 1999. The forest Payeng has planted, benefits the whole community.

He’s now working on a book aimed at teaching children the process and importance of planting trees in the present day. The Forest Man continues to plant trees in his namesake forest even today and says that he will continue to do so till he breathes his last breath.