New Delhi: “I always feel the need to work on the ground instead of just blaming the system and government through social media. Change needs participation and I’m trying to be the change maker”, says 24-year-old Vivek Gurav, a software engineer by profession who along with other techies dedicated a part of his weekend to the environment. Vivek who has been participating and conducting various clean-up and beautification drives in and around Pune for the last six years decided to undertake plogging and make Pune plastic-free and a sustainable place to live in. Plogging, is a concept that was originally introduced in Sweden, refers to picking up trash while jogging or running.

Recalling why he opted for plogging instead of regular clean-up drives, Vivek says,

I wanted to bring more volunteers for the swachh (clean) drives and was looking for something which is engaging and can have multiple benefits out of it. Plogging was something I found trending and decided to give it a try along with a few of my friends.

With a quest to solve the trash problem, in June 2019, Vivek along with his few techie friends undertook 10 plogging drives on a pilot basis. During this initiative, the team observed that it was fun to pick up waste while you jog or run unlike usual clean-up drives which are often dull affairs. Contended with the citizen participation and outcome of plogging drives, in September 2019, Vivek officially launched Pune Ploggers.

Pune Ploggers and the basic idea of plogging found many adopters, thanks to the flash floods (heavy rainfall) which affected many slums and societies. 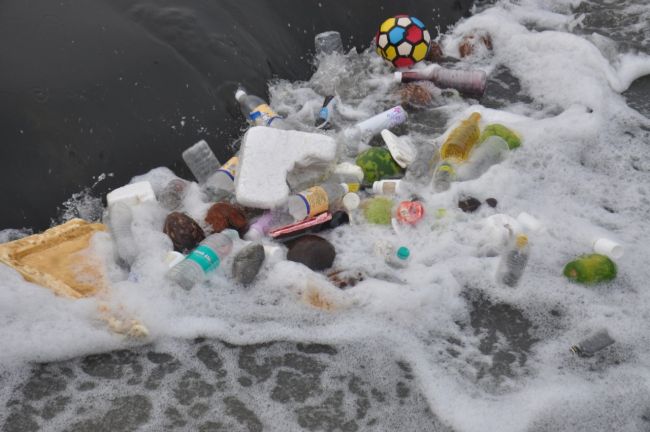 Waste flowing in the city of Pune during flash floods

Water wasn’t flowing through the drainages as they were being blocked by plastic and alcohol bottles filled with silt and mud, tells Vivek.

In 2019, Vivek was awarded REX Karmaveer Chakra Award for working towards Swachh Bharat Abhiyan. The Karmaveer Chakra Award is the global civilian honour given by the international confederation of NGO (iCONGO) in partnership with United Nations. He has also been chosen for United Nations Field Advocacy Programme and is one of the 50 changemakers across Asia, working towards creating awareness about Sustainable Development Goals. He also got the Indian Youth Award from Yuva Khel Khud Mahasangh for engaging the youth in various programmes.

Also Read: By Helping Offices, Events To Go Zero Waste, This 34-Year-Old From Mumbai Is Reducing Garbage Load On Landfills

How Do Pune Ploggers Operate

Pune Ploggers, a team of six students, spearheaded by Vivek and joined by locals work on every weekend from 6 AM to 9 AM. 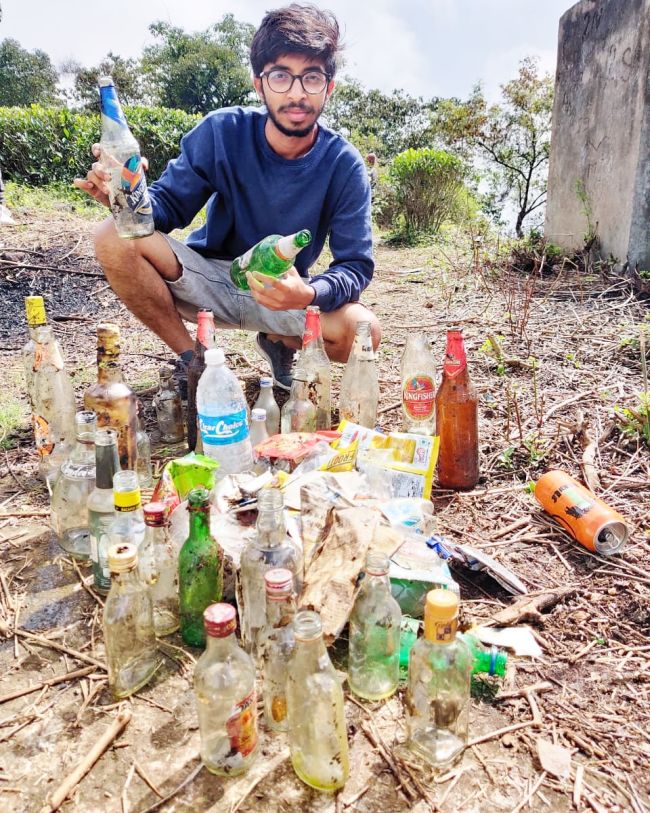 While on Saturday volunteers plog at around six random locations, close to their residence like some bus stop, Sunday plogging is fixed at a place with special importance. We initially started with hills around the city. In the last four months, we have already covered Baner Hills and Dighi Hills and have been successful in cleaning 80 per cent of the trash at these spots, says Vivek, founder of Pune Ploggers.

Currently, the Sunday plogging is dedicated to the banks of the river Mutha where 30-50 people show up. The team has already cleaned three stretches of river Mutha. Till date, the team has conducted 88 plogging drives and collected 38,000 kg of waste including beer bottles, single-use plastic waste, paper, sanitary waste, organic waste and e-waste. On January 26, the team will be completing 100 plogging drives.

Bhushan More, a student and member of Pune Ploggers has often read about beach clean-up drives in Mumbai, but he had never got an opportunity to participate in any such initiative. Talking to NDTV about what prompted him to take up something which entails waking up early every weekend, even in winters, and indulge in a physically exerting task like plogging, Bhushan says,

Through social media, I got to know about Vivek’s initiative and found it quite interesting. In their third week of plogging I decided to participate and since then there has been no looking back. Three things that kept me going are the cause, our progress, and the unique way in which we clean-up. Plogging has changed me as a person and now I think twice before throwing waste on the road.

If we talk about progress and the impact of Pune Ploggers, the team says it is apparent with the current status of the spots we have already cleaned-up.

We do revisit spots after short intervals and they are again littered by people but are in a better condition than they used to be in the past. All thanks to the locals, trying to maintain cleanliness there.

Plogging To Waste Segregation And Management

For Pune Ploggers, plogging is not limited to collecting waste and dumping it in some dustbin or in the city’s landfill. The team ensures all the collected waste is properly segregated and managed by the means of recycling and upcycling.

I have oriented ploggers to segregate the waste immediately after the drive. The basic motto is to make sure our efforts don’t go in vain. Hence, we segregate the waste into varied categories like dry waste, wet waste, biomedical waste, e-waste, plastic bottles, paper, among others, says Vivek. 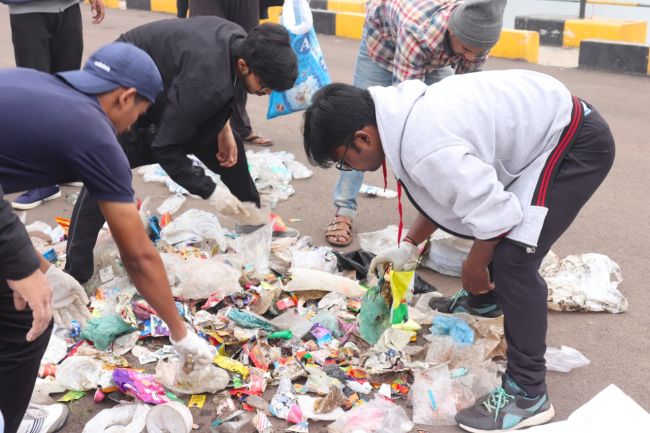 Initially, Pune Municipal Corporation Solid Waste Management Department took care of the collection and treatment of segregated waste. But now the team has found some more options like local trash collectors who take away plastic water bottles. Other plastic waste like plastic bags is either given to Pune Municipal Corporation for converting it into fuel or to Adar Poonawalla Clean City Initiative, working in the field of waste management.

Waste that can be upcycled like discarded beer bottles are given to Sarathi, a self-help group (SHG) of women who convert them into décor pieces and other handicraft items.

Depending on the shape and size of the beer bottle we decide the design and ways to decorate it. Since we have been doing it for quite some time now, it takes us half an hour to change the face of the bottle. All upcycled bottles are priced between Rs. 80 to Rs. 250, says Sakshi who learned about the art of upcycling through Internet and got a hang of it via practising. 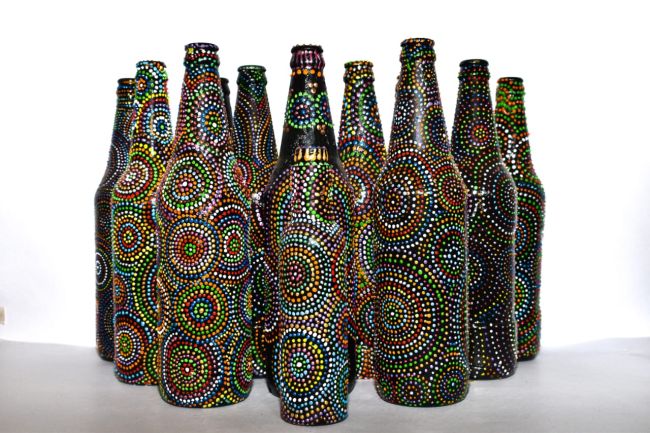 Waste bottles painted and upcycled by women of Sarathi, a self-help group (SHG) in Pune

Sakshi now teaches upcycling to other women at Sarathi. As far as plastic bottles are concerned, women’s groups create pen stand, wind chime, jewellery, and other items out of these.

These women are now on the way to commercialise their art. We have already helped them earn some income by selling upcycled bottles and in the past we have also paid them a nominal amount for the work they are doing, says Vivek.

Of the collected waste, while 19,000 kg of plastic has been sent for recycling, 2,500 beer bottles have been upcycled. Also, household plastic waste like a hand wash bottle, discarded pack of hair oil are reused, and they are refilled and distributed in slum areas. 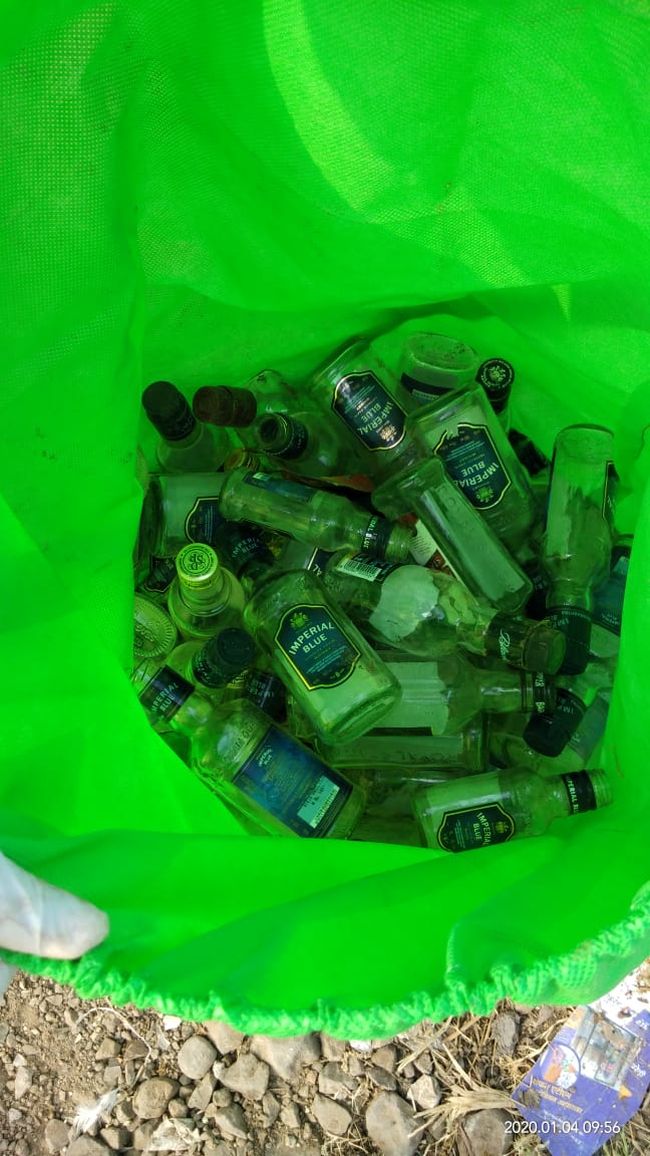 Because of Pune Ploggers the idea of plogging gained popularity in the city and it is evident with Pune Municipal Corporation organising its first ever public plogathon drive across the city. On December 28, 2019, the mega plogathon was joined by over one lakh citizens, collecting 19,000 kg of plastic waste. 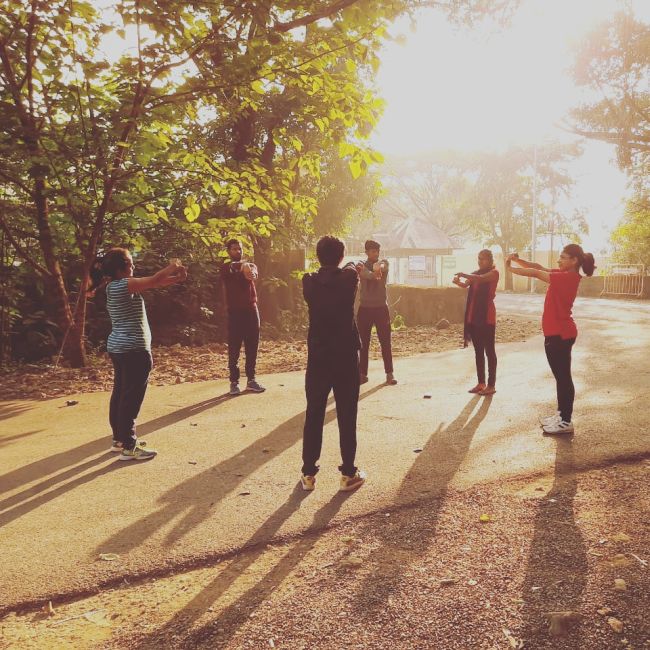 Picking up litter on road, cleaning rivers and being a part of such clean-up drives and activities still raises eyebrows of many people. It’s time we realise that we are already late in addressing the climate change for which we are responsible, directly or indirectly, signs off Vivek.

Forest Man of India: A Farmer From Assam Has Grown A Forest On Barren Land By Planting Trees For Last 40 Years