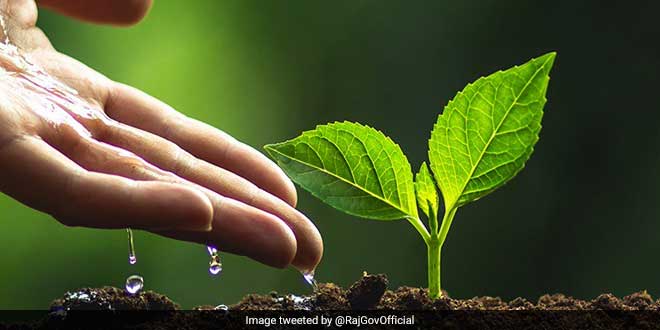 New Delhi: In a bid to increase the green cover and help the citizens of Rajasthan cope with the severe effects of global warming, the Rajasthan state government has announced four new eco-conservation initiatives. The initiatives are specifically for the state-run engineering colleges, wherein all the first year students from the upcoming academic session will be required to plant at least one new tree at the college campus and look after it throughout their course duration.

The state government has ordered a plantation drive under which every new student in state-run engineering colleges will have to plant a tree in the campus, this academic session. This is among the 4 initiatives taken for eco-conservation on engineering campuses. #GreenRajasthan

The state government has ordered a plantation drive under which every new student in state-run engineering colleges will have to plant a tree in the campus, this academic session. This is among the 4 initiatives taken for eco-conservation on engineering campuses. #GreenRajasthan pic.twitter.com/GPDgubiVcr

We have been attempting to conduct a unique plantation drive for a while now when we thought as the new session begins, it would be a great lesson for the young first year students to plant saplings at their respective campuses on their orientation day. Dr. Subhash Garg will be inspecting the engineering colleges in August, after the admission process concludes to ensure that there adequate number of plants for the new students.

Each student will be reporting to their Head of Department on the status and health of their saplings, he said.

Talking about the remaining three initiatives, the official said,

The other three eco-conservation initiatives include digging ponds on campus for water conservation, monthly cleanliness drives and teaching students about Gandhian philosophy. We will encourage the faculty members and all students to do ‘shram daan’ to celebrate Mahatma Gandhi’s 150th anniversary and dig these ponds.

When asked about the details on the state-run engineering colleges in Rajasthan, he said,

There are 11 engineering colleges in Rajasthan in eight campuses and each of these colleges, on an average, has 300 seats. We hope more state-run colleges throughout the nation get inspired by our initiative and include eco-conservation programs in their academics for a greener and cleaner India.

A similar initiative has been taken up by Delhi‘s Sikh Gurdwara Management Committee (DSGMC) as it introduced a guideline that mandates all freshers at colleges run by DSGMC to plant 10 trees during the first year of their college.

Electric Vehicles: India’s First Electric SUV Launched This Year, But Are We Ready For The E-Revolution?

Attention Freshers! Plant 10 Trees If You Are Part Of These 9 Colleges In Delhi