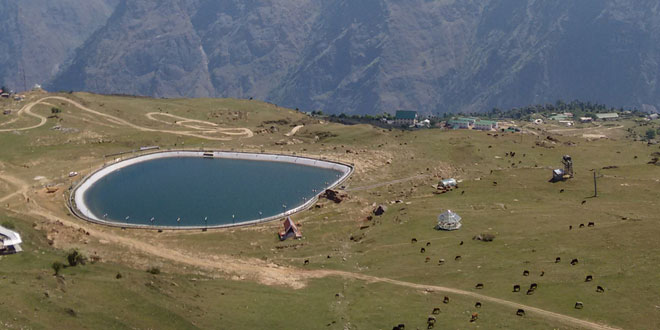 New Delhi: Surrounded by coniferous and oak forests, amid the Garwal hills, Uttarakhand’s Auli is a small yet luxurious Himalayan ski resort town. Last month, Auli hosted one of the most high-profile weddings of the country. The controversial NRIs from South Africa, Gupta brothers organised the wedding of their two sons which has been estimated to have cost over Rs. 200 crores!

While Ajay Gupta’s son Suryakant got married on June 19-20, his younger brother Atul Gupta’s son Shashank got hitched on June 21-22. Almost every hotel and resort at Auli were booked through the week-long festivities, authorities claimed.

Helicopters were used to ferry the guests that included politicians like the Uttarakhand Chief Minister Trivendra Singh Rawat, state BJP chief Ajay Bhatt, yoga guru Ramdev, as well as Bollywood stars like Katrina Kaif, Siddharth Malhotra and rapper Badshaah, among other dignitaries, who blessed the couples.

Amidst these VIP guests and high profile wedding preparations, the ceremony met with controversies concerning the environment, with activists on one side and authorities on the other.

IANS had reported that CM Trivendra Singh Rawat government was taking a keen interest in the arrangements of the two marriages, in order to promote the hill station as a potential wedding destination. It wasn’t long before various activists took cognisance of media reports and began opposing the weddings, sighting environmental concerns.

A Ghaziabad-based environmentalist and lawyer, Akash Vashishtha wrote to Union Environment Minister Prakash Javadekar expressing concern over the wedding, stating that he would be compelled to seek legal action, if the government does not act ahead of the event.

According to Mr. Vashishtha, situated at an altitude of 2,505 metres, in close proximity to the snow-covered Himalayan peaks such as Nanda Devi, Mana Parvat and Kamat, Auli is a fragile ecology, blanketed with thick snow for most parts of the year. The letter read,

The Garhwal Himalayas are already battling for pristinity and existence, with no mechanism yet for enforcement of the Solid Waste Management Rules, 2016, no sewage system, no assessment of carrying capacities, no water harvesting systems, no framing of the zonal plans and no assessments of the Cumulative Impact and any such unmindful and reckless personal event would cause irreversible damage to the fragile ecology of the whole Himalayan landscape.

The sudden rise in the number of people in the form of their guests would generate massive quantum of waste, heat and sound, which would be grossly deleterious to the local environment, he said in the letter. “This kind of personal wedding functions would also set a very wrong precedent for the future and would counter the ongoing private as well as government’s efforts towards conserving the fragile Himalayan ecology,” it adds.

Mr. Vashishtha further called out on the government support that stayed with says:

It is highly unfortunate and unwarranted that the Uttarakhand government is itself promoting this ecologically-disastrous affair. It is equally unfortunate that the Centre is maintaining silence on the issue.

We would humbly request you to issue urgent directions under Section 5 of the Environment (Protection) Act, 1986 to halt this environmentally disastrous wedding event of two private individuals who are also being probed for violation of the tax laws of India. If action is not taken, we would be compelled to seek judicial review and damages towards the environment from the parties concerned, stated the letter.

Despite the flak, CM Rawat strongly defended the ceremonies, stating that such issues are not ‘justifiable’, according to IANS.

This should be seen as an investment opportunity and as an exercise to promote Uttarakhand as a wedding destination, he told IANS.

Meanwhile, the NRI brothers in South Africa had committed to deposit Rs 28 lakh with the local authorities for cleaning of Auli after the marriage, official sources reported.

The matter made its way to Uttarakhand High Court, as a Kumaon-based advocate, Rakshit Joshi, filed a PIL complaining against the makeshift constructions and the damage the wedding will have on the ecology of the area. One day before the wedding, on June 18, the High Court allowed for the wedding to take place in Auli, on condition of a Rs. 3 crore security deposit (1.5 crore per wedding), for compensating any damage at the pristine ski resort.

The court further restricted the number of guests to 150 and imposed restrictions on plying of helicopters to ferry guests for the wedding, in addition to asking the state government to ensure that no environmental loss occurs due to the event. The court also asked the Chamoli district authorities and the state Pollution Control Board to monitor the wedding.

Under the strict orders of the Uttarakhand High Court, a group of 13 officials were responsible for monitoring the functions and also video-filming events at the wedding in Auli. All the 13 officials deployed belonged to different government departments including forests, state pollution control board, Chamoli district administration, Uttarakhand Jal Sansthan, Revenue, Public Works Department among others.

Top officials said they did not come across any damage to the flora and fauna of Auli. Since the court barred the use of helicopters at Auli, the choppers landed at Ravigram near the Joshimath helipad, from where the guests were ferried to the wedding venue in cars.

We have imposed a fine of Rs 2.5 lakh on the Gupta brothers, while a one lakh fine is for defecating in the open, a Rs 1.5 lakh penalty is for scattering garbage. A copy of the challan has also been sent to the event management company which made arrangements for the weddings.

In addition, the municipality also slapped a bill of Rs 8.14 lakh for collecting the garbage left behind after the weddings. The Gupta brothers have already deposited Rs 5.54 lakh with the municipality which also includes Rs 54,000 as user charges, the officials said.

The Gupta brothers have assured the municipality officials that they would pay all the bills and fines shortly.

Auli is totally clean now. We have picked up all the garbage and cleaned all the pit sewage, S.P. Nautiyal, the Executive Officer of the Joshimath Municipality told IANS.

Meanwhile, the issue of the refund of the Rs 3 crore security deposited by the Gupta brothers with the Chamoli district administration in Uttarakhand will be decided on July 8, in the Nainital High Court.

NDTV reached out to an environment expert for their opinion on the wedding, on the condition of anonymity, she said,

The fact that Chief Minister supported the wedding and even attended it as a guest, speaks for how far below is the environment on their agenda as a government. The wedding should have not taken place in the untouched surroundings of Auli, the rich always get away with their wrongdoings by throwing money at it and this is no different.

She further highlighted how Gupta brothers have agreed to paid the penalties and flew back to South Africa “but what about the permanent damage caused in the area and to the locals of Auli?” she said.

The expert also believes that despite the High Court restricting the number of guests to 150, there were more guests present at the wedding.

It seems highly unlikely that over 32,000 kgs of garbage was generated by just 150 guests. Despite the top officials of thirteen departments present in the wedding to monitor, on the order of High Court, this amount of garbage was generated in addition to the cases of open defecation. How do we have multiple cases of Open Defecation without anyone from any of the 13 departments reporting even a single case? I hope the High Court once again helps justice prevail and take stringent actions against Gupta brothers not only to teach them a lesson but to show that such treatment of the environment is absolutely unacceptable. I also hope the Chhief Minister wakes up from his dream of turning every place into a tourist destination and start thinking about preserving the environment, she signed off.