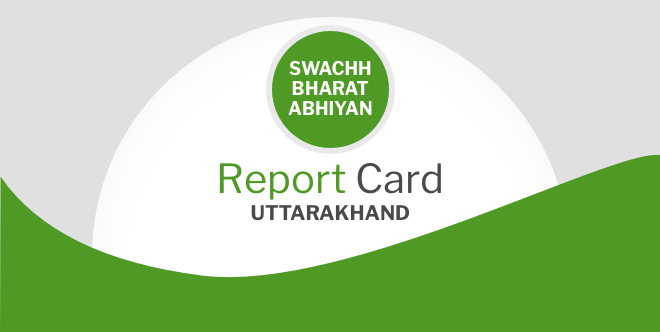 Mumbai: Located in Uttarakhand’s district of Chamoli, Mana village is the last Indian village from the border of India and China in the Himalayas. The village which has a population of 1,214 is dominated by the Bhotia community and is known for its spacious wooden houses where each family practises organic farming. Along with growing their own vegetables, cleanliness is something that is passed down from generation to generation. With sanitation and hygiene already in its blood, the village is now on its way to attain the open defecation free (ODF) plus status that emphasises on solid and liquid waste management. The village will soon have community soak pits, compost pits, a segregation centre and separate sewage line for liquid waste.

Like Mana, other villages in an already ODF declared Uttarakhand are now focusing on managing their solid and liquid waste. This ODF plus protocol is an extension of India’s open defecation free dream which gets implemented once a state is declared free from open defecation. After Chief Minister Trivendra Singh Rawat formally declared the rural areas of the state ODF in June 2017, the officials of Swachh Bharat Mission activated the ODF Plus project across the state. As for the urban areas, all the 96 Urban Local Bodies barring six have been certified by the Quality Council of India (QCI). The remaining have self-declared themselves and will receive the tag once QCI hands over the ODF certificate.

We have a total of 7,500 Gram Panchayats (GPs) in the state, of which 112 are already practising scientific treatment of solid waste by setting up infrastructure including segregation centres and composting pits. Rs 5 lakh have been allotted to them to develop their existing solid and liquid waste management facilities. 800 GPs have submitted a Detailed Project Report that states the cost, manpower and infrastructure required for the ODF Plus mission, Suresh Pandey, State Swachh Bharat Mission Consultant tells NDTV.

The officials have resorted to integrated mechanism of social and local self-governance where the panchayats are working in collaboration with self-help groups, anganwadis and NGOs to spread awareness and give training to people to handle their waste. Once every month, all the districts organise Swachhta Pathshala (Cleanliness Class school) where all the villagers including children are invited for workshops and training programmes on waste management.

“Since the ODF plus task is challenging we are taking baby steps to spread awareness. For example, many GPs are directing schools to conduct classes on composting and recycling. Once the children get accustomed to the concept they will implement the same in their houses,” adds Mr Pandey.

Since the state has a low density, execution of waste management is a huge problem says Mr Pandey. As Uttarakhand is a hilly region, the distance between households is very high. Collecting and transporting waste every day is economically not feasible as the user fees are not enough. Besides, the households generate negligible dry waste so selling or recycling them is not an option. To overcome these challenges the authorities are now clubbing 4-5 GPs whose waste will be treated together.

The concept of community pits is also being executed in the region. According to this concept, one common composting pit is created where multiple households will dispose their wet waste and every 15 days or so, a sanitation worker will come and treat the waste.

Likewise, the urban areas of the state are also integrating the concept of waste management in all their 96 urban local bodies (ULBs). As per the Additional Director, SBM-U Uday Rana Singh, all the 796 wards have achieved door-to-door waste collection and 90 per cent of the households practise waste segregation.

The Swachh Bharat is like a game and with every passing level the mission becomes more difficult. However, we have crossed the most difficult level which is to create awareness. The Information, Education and Communication activities have reached to the remotest areas. We revived the awareness level as soon as the cities turned ODF. Besides, the mandatory waste segregation policy launched by the Centre last year in June made the ODF plus journey easier. All the households in urban areas of the state practise waste segregation, says Mr Singh.

When asked if all the ULBs have a waste treatment plant, Mr Singh says that considering that not enough waste is produced getting a plant isn’t a viable option. Only a few major cities including Dehradun, Roorkee and Haldwani are currently treating the city’s waste and the waste accumulated at their respective landfills. For instance, the capital city of Dehradun generates around 300 tonnes of garbage daily of which 70 per cent is the biodegradable waste. It has been over six months since the waste treatment plant located on the outskirts of the city at Shishambara is treating the wet waste. As for the dry waste, it is sold to recyclers. 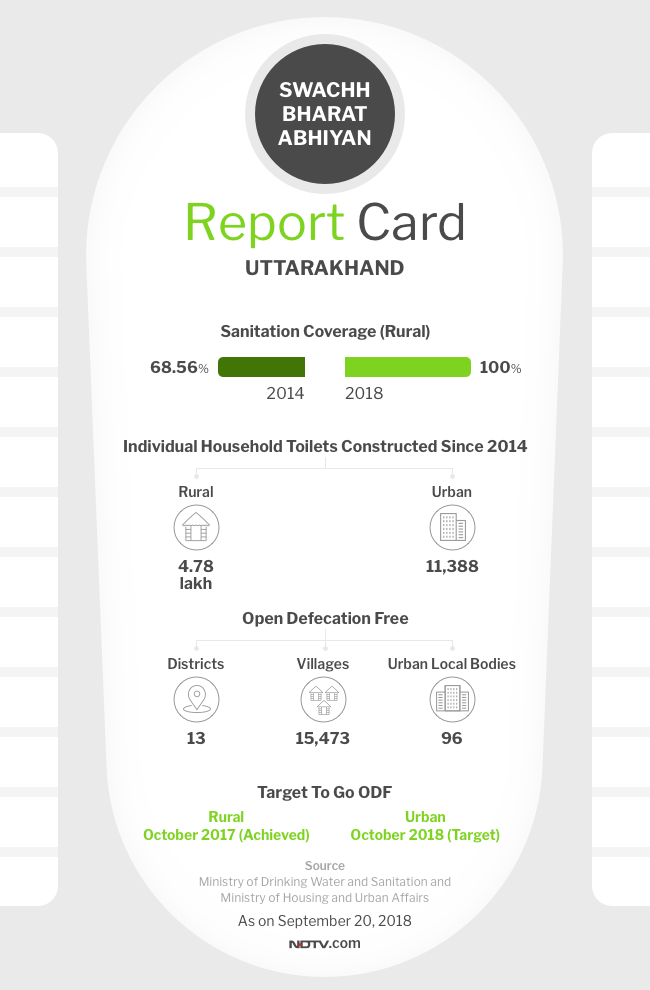 While the solid waste is being treated effectively, the liquid waste or sewage is still polluting Ganga as there is no provision to treat sewage. The state government has sought Rs 200 crore from the Centre to establish sewage treatment plants in the city. The remaining cities are setting up composting units in all the wards to treat wet waste and the dry waste will be sold the recyclers said Mr Singh.

Under the Namami Gange initiative, 31 sewage treatment plants have been sanctioned to treat liquid waste of which work on 16 projects have been completed.

Projected sewerage generation in the year 2035 in Uttarakhand is 122 MLD (million litres per day) while the existing treatment capacity is 97.6 MLD. The projects under implementation will create a capacity for treating 131.7 MLD sewage after completion, Union Water Resources Minister Nitin Gadkari had announced in August.

Both, the urban and rural administrational bodies have applied for the ODF Plus status. However, no specific deadline or target have been set by them to make the state waste free.

Uttarakhand’s ODF Story At A Glance

Uttarakhand was the fourth state in India which declared its rural areas open defecation free. A total of 4.78 lakh toilets were constructed to make rural Uttarakhand ODF and the sanitation coverage increased from 68 per cent to 100 per cent in last four years. Under the Namami Gange initiative, all three villages of the state along the banks of river Ganga were declared ODF in August 2017. As for the urban areas, 11,000 plus toilets were constructed since 2014.