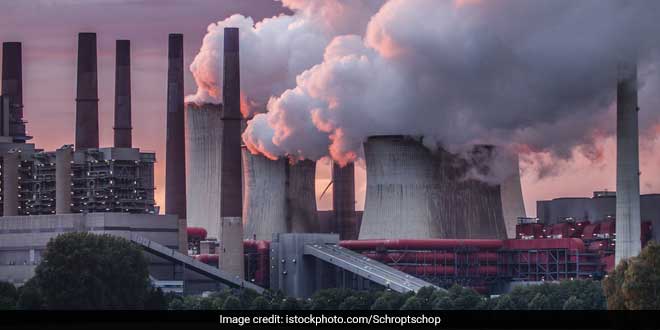 New Delhi: Global carbon dioxide emissions are set to rise nearly 3 percent this year due to continued fossil fuel use, scientists said on Wednesday, dashing hopes that an increase in 2017 was temporary after two years of slowdown. World emissions grew by 1.6 percent last year and will increase even more this year due to the sustained use of coal, oil and natural gas, an annual report by the Global Carbon Project showed, a group of 76 scientists in 15 countries.

Carbon dioxide (CO2) emissions were roughly flat from 2014-16, which led to hopes that emissions had peaked in 2013.

The data, presented during talks among around 190 nations in Poland on implementing the 2015 Paris Agreement climate accord, are a setback for a global goal of curbing emissions to avert more floods, heat waves, and rising sea levels.

The world is on track for a 3-5 degrees Celsius rise in global average temperature this century and if all known fossil fuel resources are used the rise will be even bigger, the U.N. World Meteorological Organisation warned last week.

The projected growth in carbon dioxide emissions from fossil fuels and industry is 2.7 percent in 2018, but uncertainties persist and growth rates between 1.8-3.7 percent remain possible, the Global Carbon Project report said.

CO2 emissions from fossil fuels, cement and industry, which make up the bulk of manmade greenhouse gases, are on track to rise to a record high of around 37.1 billion tonnes this year.

CO2 emissions from all human activities, including fossil fuels, industry and land-use change, will reach around 41.5 billion tonnes, the report said.

Despite growth in low-carbon technologies, not enough is being done to support policies which limit emissions, said Glen Peters, one of the leaders of the study at the CICERO Center for International Climate Research in Oslo.

The rise in emissions in 2017 could be seen as a one-off, but the growth rate in 2018 is even higher, and it is becoming crystal clear the world is so far failing in its duty to steer onto a course consistent with the goals set out in the Paris Agreement in 2015, he added.

Nearly all countries have contributed to the rise in global emissions: either by growth in emissions, or reductions that are slower than expected.

China’s emissions are set to rise around 4.7 percent this year, as it is still expected to be reliant on coal over the next decade even though it has been deploying renewable energy, the report said.

Due to strong economic growth and continued use of coal. India’s emissions are expected to grow by 6.3 percent this year.

U.S. emissions are seen rising around 2.5 percent this year, after falling 1.2 percent a year since 2007. However, it is expected that U.S. emissions will decline again in 2019 as cheap gas, wind, and solar will continue to displace coal.

The European Union should experience a slight decline in emissions of 0.7 percent this year.

In the rest of the world, accounting for 42 percent of global emissions, a rise of 1.8 percent is expected. This group is mainly developing countries and the five contributing the most to emissions growth in the last decade are Saudi Arabia, Iran, Turkey, Iraq and South Korea.