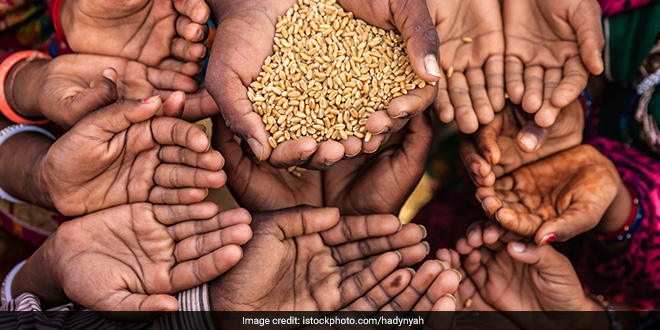 New Delhi: The Global Hunger Index exaggerates the measure of hunger, lacks statistical vigour and has problems on multiple counts, Union Health Ministry sources said Tuesday after India stood 107th out of 121 in this year’s rankings. It does not really measure hunger, they said while asserting that the report “deliberately ignores the tremendous efforts made by the government to ensure food security for the population, especially during the COVID-19 pandemic”.

Three out of the four indicators used are related to the health of children and cannot be representative of the entire population, sources said. They said that according to the Indian Council of Medical Research (ICMR) the indicators of undernourishment, stunting, wasting and child mortality do not measure hunger per se as these are not the manifestations of hunger alone.

Many of the measures that are used to evolve an index that measures hunger are probably contextual, the ministry sources said.

Claiming that the Global Hunger Index was erroneous and suffers from serious methodological issues, an official said,

It exaggerates the measure of hunger, lacks statistical vigour, has a problem of multiple counts, and gives higher representation to under-five children.

The fourth indicator, the ‘Estimate of Proportion of Undernourished Population’ for India is 16.3 per cent. For a country of the size of India, the data has been collected from a minuscule sample of 3,000 and is statistically wrong, lacks validity, biased, and unethical, sources in the ministry said.

Also, the framing of questions was inappropriate and negative. For example, respondents were asked: During the last 12 months, was there a time when, because of lack of money or other resources you were worried you would not have enough food to eat? You ate less than you thought you should? Inclusion of such questions signifies that the agencies had pre-formed biases and did not search for facts based on relevant information about the delivery of nutritional support and assurance of food security by the Government, an official source said.

The other three indicators relate primarily to children such as stunting, wasting and under-five mortality. These indicators are the outcomes of complex interactions of factors such as drinking water, sanitation, genetics, environment and utilisation of food intake apart from hunger. Interpreting ‘hunger’ based on health indicators of children is neither scientific nor rational, the sources said. Even then their estimates are wrong as National Family Health Survey (NFHS-5) has shown improvement in stunting and wasting and a significant reduction in U5MR, they said.

In the Global Hunger Index, 2022, India ranked 107 out of 121 countries, much behind its South Asia neighbours, with the child wasting rate at 19.3 per cent, the highest in the world. With a score of 29.1, the level of hunger in India has been labelled “serious”.

The Ministry of Women and Child Development on October 15 rejected the findings, alleging it is an effort to taint the country’s image and the index suffers from serious methodological issues and is an “erroneous measure” of hunger. The opposition leaders said the government must take responsibility for its “failure”.