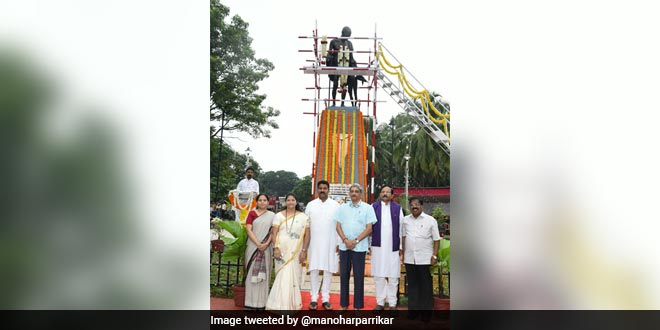 Panaji: In an effort to go green, the Goa government has decided to minimise the use of environmentally hazardous plastic on different occasions including the state functions. Chief Minister Manohar Parrikar had instructed all the departments to reduce the use of plastics including during the functions organised by the state government.

The results (of minimising use of plastic) are now showing up, pointed out Chief Minister Parrikar.

Almost 15-days back I had appealed to the state authorities that during government functions flowers or bouquets should not be wrapped in a plastic. The suggestion was well taken.

Now during government functions I get only a flower without plastic around it or a bouquet without plastic covering, Chief Minister Parrikar told a gathering on the occasion of Gandhi Jayanti this morning at Old Goa, near here.

The chief minister advocated the need for cleanliness and reduction of plastic usage during the event to commemorate birthday of Mahatma Gandhi. Chief Minister Parrikar urged the religious leaders to come forward to spread the cause of cleanliness amongst their followers.

We should start working from our self to reduce the garbage and keep the surroundings clean. I appeal to the religious heads who are present here to spread the message of cleanliness with their followers, he said referring to the heads of three different religions who were present.

Referring to the state-of-the-art garbage treatment plant set up at Saligao in Goa, he said the facility turns garbage into useful by-products.

Chief Minister Parrikar said the best way to solve the problem created by garbage is to create less of it (garbage).

Not Far From Lucknow, Mountains of Garbage In India’s Dirtiest City