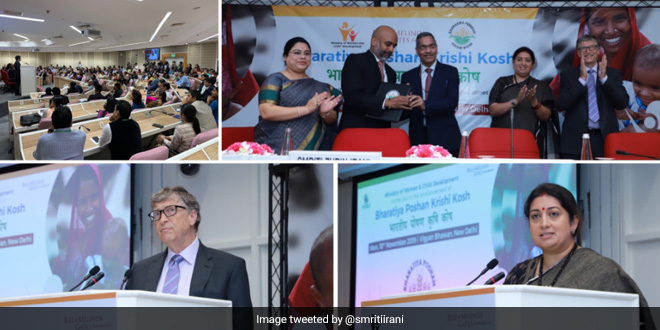 New Delhi: As part of the Poshan Abhiyaan, the Ministry of Women and Child Development in partnership with the Bill & Melinda Gates Foundation, launched India’s first Poshan Atlas, in order to create a repository of diverse crops across 127 agro-climatic zones of the country. The Bharatiya Poshan Krishi Kosh (BPKK) would be accessible to policy-makers, administrators, experts and communities in order to help meet nutritional outcomes in the country, explained the Minister of Women and Child Development Smriti Irani.

Taking a step forward in the direction of ‘Evergreen Revolution’ as envisaged by PM @narendramodi Ji, @MinistryWCD in partnership with @gatesfoundation launched Bharatiya POSHAN Krishi Kosh in the presence of Mr. @BillGates. #PoshanBharatKosh pic.twitter.com/qBNHboNWtJ

Explaining the relevance of the initiative, Mrs Irani says that in this age of globalization, modern food systems have resulted in the loss of knowledge and consumption and of traditional and local nutrient rich foods and increase in the industrialised and processed food products. She said,

The replacement of nutrient-dense millets, suited for cultivation under the water-strapped conditions of the country, by other grains has been a result of globalisation; increased awareness about the suitability of millets from both the nutrient standpoint and agricultural logistics is catalysing the slow restoration of these super grains in recent times.

Solving this problem will bring about a dramatic change in the development of India and help the country to attain the Sustainable Development Goals. The Foundation will be happy to partner with the Government of India, the Ministry of WCD and other Ministries in every way to deal with this multi-faceted challenge in order to create a sustained nutritional programme to bring down malnutrition in the country, he said.

Agricultural scientist, Dr. M. S. Swaminathan asserts that in order to make India nutrition secure, implementation of a five-point action programme is the need of the hour. These five steps include ensuring calorie rich diet for women, expectant mothers and children, ensuring intake of proteins in the form of pulses to eradicate protein hunger in women and children, eradicating hidden hunger due to deficiency of micro nutrients like vitamin A, vitamin B, Iron and Zinc, ensuring clean drinking water supply and spreading nutrition literacy in every village particularly in mothers with children less than 100 days’ old.

Lack of proper nutrition among children affects not only the physical development of the child growing into adulthood but also affects brain development. I urge the Ministry of WCD to create a band of community hunger fighters who will be trained to deal with hunger among women, expectant mothers and children by following this five-point action programme, he said.

When it comes to the government’s role in implementing this five action plan, Mrs Irani explained that the Government has created a separate Ministry of Jal Shakti which is now working on providing clean drinking water to every household in the country.

She further informed that in September this year, POSHAN Maah was celebrated and in one month 36 million POSHAN related activities were held across the country. The Pradhan Mantri Matru Vandana Yojana Scheme (PMMVY) has reached out to 10 million beneficiaries by compensating for wage losses and since 2013 maternal mortality rate has come down by 26.9 per cent, she said.

I would like to take this opportunity to thank the 1.3 million Anganwadi workers who help to keep the nutritional goals alive, the 1.2 million Anganwadi helpers and state agencies who have reached out to 85 million beneficiaries and digitally linked them with the Government of India through daily updates on the dashboard. But for India to reach the Sustainable Development Goals (SDGs) it is now time to bring together the science of implementation with the science of communication so that nutrition is on the political and administrative agenda along with hygiene and clean drinking water, she signed off.

World Toilet Day 2019: Leaders Urge People Across The Globe To Use A Toilet