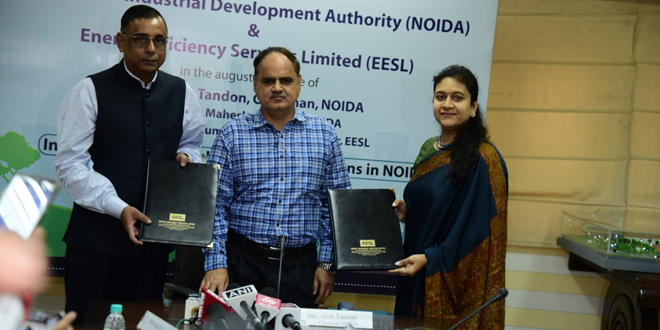 New Delhi: In a bid to encourage the use of electric vehicles (EVs) by promoting robust EV infrastructure, Noida Authority, has decided to set up EV charging stations in the city. For the same, the Noida Authority signed a memorandum of understanding (MoU) with EESL (Energy Efficiency Services Limited), a joint venture of PSUs (Public Sector Undertakings) of the power ministry, on Thursday (July 25). As part of the agreement, EESL will be installing 100 public charging stations across Noida (New Okhla Industrial Development Authority).

We are constantly striving to make Noida cleaner, greener and more sustainable. Establishing a public charging infrastructure in the city will greatly augment these efforts and will spur EV adoption in the city. With this partnership with EESL, we envisage the eMobility movement to gain traction in the city.

As per the pact, while Noida Authority will ensure availability of space at parking lots and help in providing requisite power for the charging infrastructure, EESL will make the investment in installation, operation and maintenance of EV charging stations for 10 years.

Two charging stations have already been installed in Noida in sector 63 and at gate number 2 of Noida Electronic City metro station. Both the chargers will be in operation within a week. Giving out the details of the implementation of the project to NDTV, N Mohan, Deputy General Manager, Electric Vehicles Charging Infrastructure at EESL said,

First we will be conducting a location assessment study involving all parking stations in Noida. The research aims at understanding the accessibility to parking lots, footfall of vehicles, and other things. Within four to five weeks the study will be completed and based on that we will decide whether to install slow chargers (AC chargers) or fast chargers (DC chargers).

As per the current plan, EESL will have a mix of alternate current (AC) chargers and direct current (DC) chargers which will cater to two-wheelers, three-wheelers and four-wheelers. All the 100 charging stations will be made available for use in the next six months.

A full charge in these vehicles would cost Rs. 170, enabling them to run for 120 km. This is much cheaper than fossil fuels and CNG. Now, new EVs are also being introduced which have a run limit of over 400 km on a single full charge, Saurabh Kumar, Managing Director for EESL told PTI.

As per a press release shared by the officials, sharing the benefits of having EV charging stations in the city, Ritu Maheshwari, CEO at Noida Authority said,

Installation of public charging stations will reduce the range anxiety among Noida residents and accelerate the adoption of EVs in the area. A robust public charging infrastructure complements the legislative efforts in creating a sustainable EV ecosystem. With the increasing penetration of EVs, the local emission of pollutants is also expected to reduce, leading to cleaner air and several public health benefits.

Along with this, the Noida Authority will be acquiring five electric vehicles from EESL on a lease. The electric cars will be allotted to officers and will be used for office work.