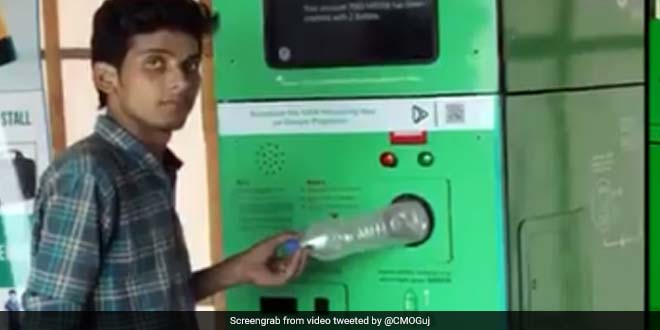 New Delhi: Today in the morning when Prem Rawal, 42-year-old resident of Ahmedabad,went out for a morning walk, she saw a group of people standing around a machine, near Kankaria lake’s gate 6. After strolling for few minutes, and enquiring, she realised that it is a plastic bottle recycling machine which pays you in exchange of a plastic bottle. Prem Rawal, who was not much interested in giving up the use of plastic, especially plastic bottles, got a reason to do that, courtesy Gujarat government. On June 5, the World Environment Day, the state government decided to install ‘Reverse Vending Machines’ and incentivise people who help the government recycle single-use plastic bottles.

Under ‘Paravan Jalavihar Yojna’ the Gujarat government has decided to install ‘Reverse Vending Machines’ which will give Rs. 1 everytime an individual drops a plastic bottle into the machine. Through this initiative, the Gujarat government aims to ‘beat plastic pollution’ and contribute for a cleaner and greener environment.

Sharing the good news, Gujarat Chief Minister Vijay Rupani posted a video on social media highlighting the initiative and how it will help both citizens and ragpickers. He said, “Get cash for dumping trash – Gujarat Govt introduces ‘Reverse Vending Machines’ that actually dispense cash in return for used plastic bottles.”

Speaking at an event in Gandhinagar on World Environment Day, earlier this month, the Chief Minister said,

With an estimated 5 crore PET bottles being annually used in Gujarat, this scheme will help check the dumping of plastic bottles.

To recycle PET bottles, the plan is to install 20,000-25,000 reverse vending machines. For reference, a couple of vending machines were put up at the exhibition, organised on World Environment Day. One of the vending machines uses mobile numbers and a mobile app for registration. An individual can drop as many PET bottles as he/she wants and encash the points received for each bottle through an e-wallet app.

As of today, one machine has been installed at Kankaria lake, Ahmedabad and soon nine more machines will be deployed.

Apart from this, on World Environment Day, municipal corporations in Vadodara, Ahmedabad and Rajkot called for a complete ban on production and usage of plastic bag, tea cups, and packaged water pouches.

Meghalaya Chief Minister Conrad Sangma Says No To Plastics, Aims To Set An Example For Officials