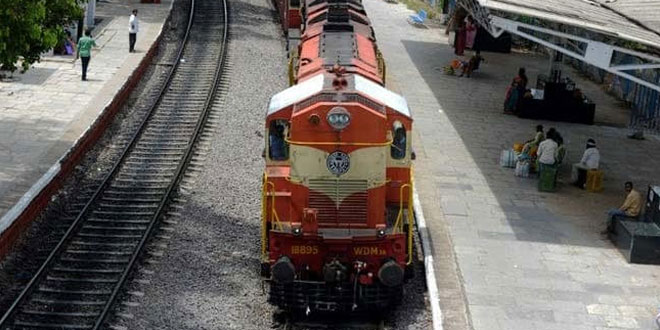 Surat: To propagate Mahatma Gandhi’s mantra of ‘Cleanliness is Godliness’ and achieve the objective of a ‘Clean India-Green India’, a young entrepreneur from Surat has launched a mission to turn railway station in Udhana town of Gujarat‘s Surat district into India’s first green railway station. Viral Sudhirbhai Desai is attempting to turn Udahana Railway Station into a green and pollution free one like Mumbai’s Chhatrapati Shivaji Terminus. For this noble initiative, Mr. Desai has received support and assistance from various organisations such as – Chhadyo and Archroma organisations as well as from the Station Director CR Garuda.

Mr. Desai has installed over 1700 air purifying plants at the rail stations to make Udhana Railway Station clean and green. Along with it, to promote the message of nurturing and protecting the environment, the walls of the station has been painted with a special “environment protection graffiti.”

Moreover, a memorial has been erected at the station to pay tribute to soldiers slain in the Pulwama attack and trees were planted in the name of the martyrs.

Not only does Mr. Desai practice what he teaches, he decorated his car with green grass so others are also inspired to go green. He said,

I have been working for the environment and energy protection for the past several years and I am also trying to aware the government as well as the people about the glaring environment issues.

Mr. Desai further added, “The environment is seriously affected due to cutting of trees. It is our responsibilities to re-energize this earth. This campaign has been started with a vision of Go Green.”

Mr. Desai and his organization ‘Hearts at Work Foundation’ are also working to encourage people to take up tree plantation and other environment protection activities regularly. Under Mr. Desai’s Clean India, Green India initiative, over twenty-three thousand trees and thirty-eight tree guards have been distributed.