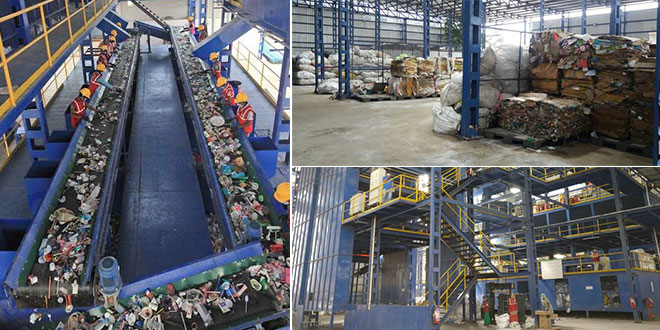 New Delhi: Gone are the days when the term ‘city’ used to mean wide clean roads, beautiful parks, sprawling houses, and spick and span market places. Today, when someone talks about cities, the imagery that forms in one’s mind is markets with garbage piling up in nook and cranny, plastic packets, bottle and polythenes strewn all over, houses generating tonnes of wet and dry waste that end in rivers and seas untreated, roadside garbage dumps, rising man-made mountains in the form of landfills and then indiscriminate burning of waste to get rid of it with ease without worrying about environmental consequences.

While experts say that segregation of waste at source is the first step towards tackling the increasing problem of waste, the practice is yet to take off among most city dwellers in the country. Being conscious of the increasing waste woes in the country, 39-year-old Sandeep Patel, a management professional decided to manage the mess in his city, Ahmedabad. He founded ‘Let’s Recycle’, a waste management startup in 2011 that aims to fight the burgeoning waste in cities. 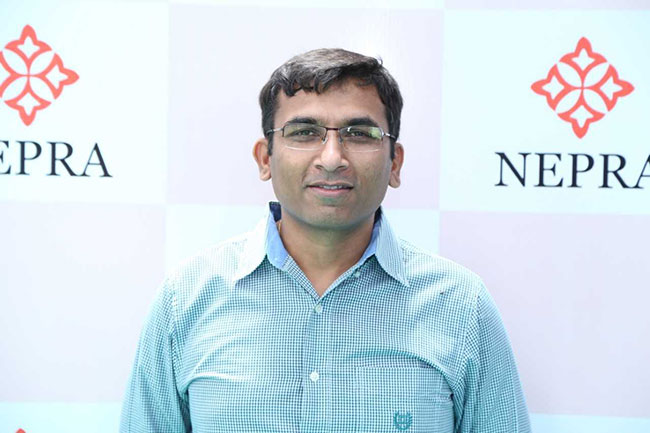 After completing Master of Business Administration from The United Kingdom, Sandeep Patel came back to India and did research on waste management in the Indian context to develop a business model in this sector

While talking to NDTV about his fight against increasing waste, Mr. Patel said,

In the current economic state of the country, when urbanisation is at its peak, the waste generated in cities is also on a high, which is ultimately increasing the stress on landfills. The waste collectively generated by all of us is growing to such an extent that it is even reaching our oceans and jungles now and obstructing the ecosystem of our planet terribly. Through ‘Let’s Recycle’, we are trying to manage waste by collecting, segregating and recycling it. We aim to transform and strengthen the waste management system in Gujarat, which is currently quite weak.

He believes that for managing the quantum of garbage existing today, the governments need to go for decentralised solutions, as most of the time, government agencies have limitations and are not equipped enough to deal with the mess. “After speaking with numerous officials, I found that one of the biggest challenges that urban local bodies face in most cities is the management of solid waste”, said Mr. Patel.

According to Mr. Patel, when he started ‘Let’s Recycle’, waste management sector was not seen as a business at all and was hardly explored. He said,

People hardly spoke about solid waste recovery and revenue earning from waste like paper and plastic. It was only seen as a niche for the informal sector- the waste pickers or so-called scavengers of the society. It was also a sector facing financing challenges. Loan processing from banks was difficult as the revenue model for the sector was not properly understood. After completing my MBA (Master of Business Administration) from The United Kingdom, I came back to India. I did a lot of Research and Development in the Indian context to develop a business model in this sector. 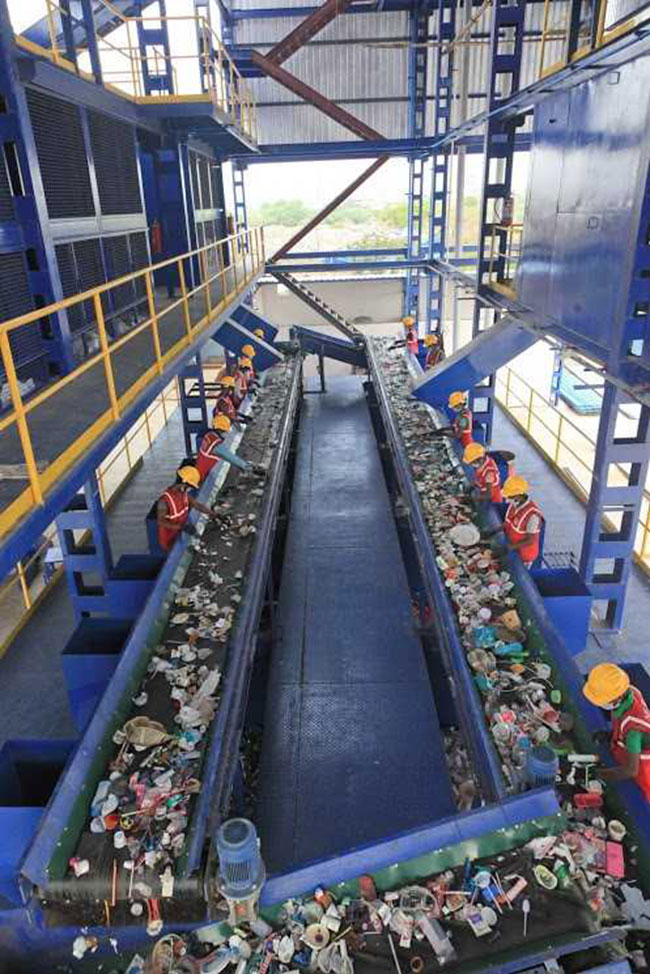 Mr. Patel further explained that as a pilot project, he started ‘Let’s Recycle’ with a small material recovery facility for dry waste of only three to four tonnes per day in Ahmedabad. Gradually the company established a facility of 30 tonnes per day followed by a facility with the capacity of processing 100 tonnes of waste per day. Today the firm is also experimenting on engaging advance technology – robotics and artificial intelligence – in the waste management sector and has recently established a facility in Indore with a capacity of processing 300 tonnes of waste per day.

We aim to divert waste from landfills and mitigate 5,60,000 million tonnes of carbon dioxide emissions into the air every year. We are currently working on building the necessary bandwidth for expanding further to be able to process over 1,500 tonnes of waste per day and engage over 30,000 waste pickers. We hope to reach this target in the next 5-10 years because with government initiatives such as the Swachh Bharat Abhiyan and the increasing focus on solid waste management regulations, there is a demand for organised waste management enterprises.

Also Read: A 12-Year-Old Develops A Machine To Remove Plastic From Water Bodies 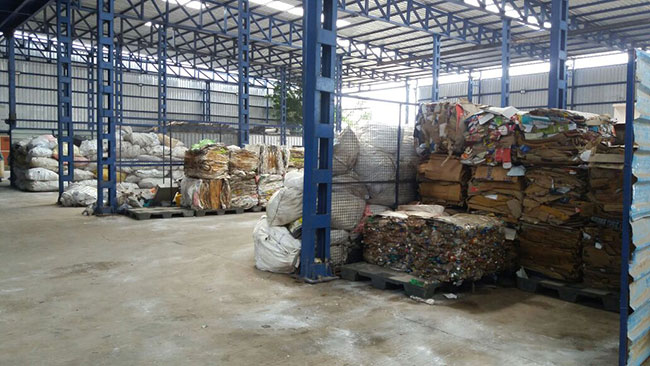 The company uses optical sorting technology for segregation of waste into different commodities. Optical sorters are software driven and use cameras to recognize objects’ color, size, shape, structural properties, and chemical composition to sort waste. After going through the sorting stage, the waste passes through a quality check to meet recyclers’ demands before being finally sold to them. Mr. Patel said,

With our unique ability to sort, segregate and perform value addition on the procured dry waste, we provide a one-stop solution to all stakeholders like waste generators, municipal corporations, waste pickers, and recyclers and we leverage technology to help us connect the entire waste value-chain and thereby bring in efficiencies in the operations. 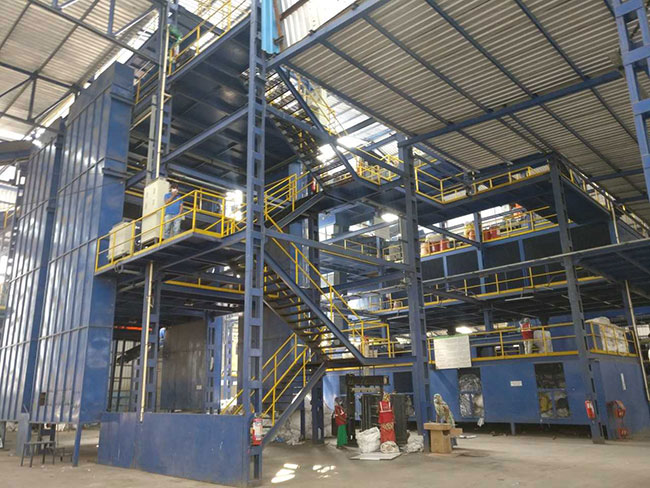 Mr. Patel revealed that of the dry waste collected per day, a major portion is plastic followed by paper and cardboard.

The firm has developed a smartphone application that connects its employees with clients and a cloud-based resource planning system through which the quantity of waste collected is recorded online and the clients are informed about the quantity and type of waste discarded by them and carbon emission mitigated by diverting the waste from landfill to a recovery centre.

Through its many public interventions and awareness programmes, ‘Let’s Recycle’ also sensitises people towards the menace of increasing waste in cities and provide them information about waste segregation – separating waste into Recyclable, Non-recyclable, and Compostable bins – recycling, and harmful impacts of garbage burning.

Addressing The Plight Of The Waste Pickers

As per Mr. Patel, waste workers especially the one operating in the informal sector suffer a range of health problems like coughing, wheezing, chronic bronchitis, skin diseases among others which are caused by handling household and commercial waste and sometimes even hazardous industrial waste.

Moved by their plight the venture started bringing the marginalised waste pickers into the mainstream by engaging with them. Currently, the firm has 250 employees, including 100 women, who were previously waste pickers. Their earnings increased by 20 to 30 per cent. They collect garbage from houses, hotels, industries, offices, and municipal corporations and sell that to the firm.

Mr. Patel signed off by saying,

Experts project that an average person discards about 15 kilograms of kitchen waste every month and the easiest way one can adopt to reduce their contribution to the landfill is to compost this waste at home. For dry waste like bread packets, cardboard from online shopping, containers for take-out food and other, separate these into recyclable and non-recyclable so that these can be treated adequately. According to an estimate, India will add about 30 crore new urban residents by 2050 which will intensify environmental issues like land degradation, waste, landfill overspill, groundwater depletion, and air pollution. With a population increase of this level, we need to prepare ourselves for the waste coming our way from today onwards.

In A Bid To Control Pollution, Gujarat To Launch Emission Trading Scheme On World Environment Day

Can A Film Set Be Made Eco-friendly? An Inspiring Short-film Using A Set Made Of Recycled Wastepaper Proves It Right