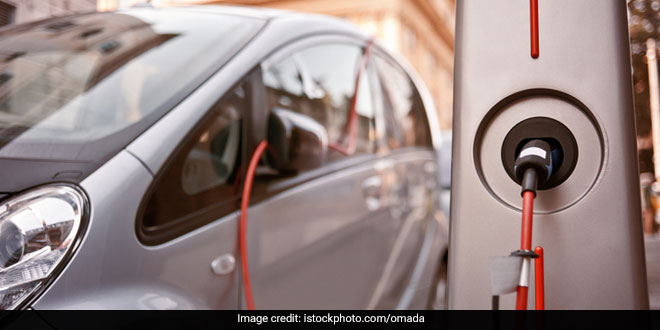 New Delhi: The Deputy Commissioner of Gurugram has signed a memorandum of understanding (MoU) with Indus Tower Limited, a telecom startup in Haryana for setting up a public charging station (PCS) for electric vehicles (EVs) in the city. This PCS will be the first government-sanctioned EV charging station and will begin operating by the end of March 2019, said Gaurav Singh, a public relations officer in Gurugram’s deputy commissioner’s office. It is being installed near the Mini Secretariat on the Delhi-Jaipur highway.

Mr. Singh said that the MoU has been signed to encourage the use of EVs among the residents and to provide charging facilities to the people who are already using EVs. The facitlity that costs Rs. 13 lakh will have a high-capacity charger which can charge three cars simultaneously. With the help of this charger, an e-car can be charged within one and a half hours. Along with the charger, a waiting lounge will also be constructed with wi-fi facility for the users waiting for their vehicle to charge.

Electricity for the PCS will be provided by Haryana Vidyut Prasaran Nigam Limited (HVPNL) at Rs. 7 per unit to consumers and as per Mr. Singh, the users will not be charged for the lounge facilities and will have to pay only for the number of units of electricity consumed to charge the vehicles.

According to Mr. Singh, this move is in line with the city administration’s initiatives to curb the rising pollution in the city. He said that more such stations will be installed at other places in the city as an initiative to encourage electric mobility. A similar initiative had earlier been envisioned by the Gurugram Metropolitan Development Authority (GMDA) last year where it procured six electric cars for its top officials and installed one community charging station (CCS) in the campus for these cars.

Gurugram, which is one of the most polluted cities in India, saw a sale of 6.307 electric two and four-wheelers in the year 2017, according to an estimate by the Society of Manufacturers of Electric Vehicles (SMEV). According to Mr. Singh, people have started to realise the harmful impacts of pollution and as a result, EVs are slowly becoming popular. He said,

It is easier to spot an EV on road now than a few years ago on the roads of EVs. But we still need a huge transition to take place in order to check pollution.

As per experts, deforestation, unregulated construction, garbage burning and massive vehicular emissions have damaged the environment in Gurugram. One can hardly forget the viral photo of Bryan Adam’s silhouette in the dusty and smoggy air above the Leisure Valley Park in the city in October last year inducing shock and horror over the toxic smog. Gurugram also made into the list of World Health Organisation (WHO) stating the 20 most polluted cities in the world, at number 11. While this has been the status of air quality of Gurugram for past few years, the city administration has decided to change the situation now by facilitating and encouraging the use of electric vehicles, as one of its pollution-curbing initiatives.

Starbucks To Go Big On World Environment Day In India, Will Switch To Compostable & Recyclable Packaging