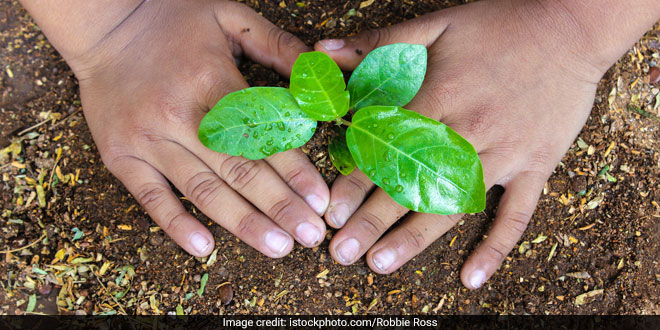 New Delhi: Spread over 176 acres near the Old Fort in Delhi, The National Zoological Park, popularly known as Delhi Zoo, is home to thousands of animals and birds. Observing Van Mahotsav week is a long-standing tradition for this zoo, but this year authorities decided to broaden the scale of the plantation drive and plant 50,000 saplings this month.

This is an annual drive here but we have widened the scale of plantation this time. In fact, on July 4 we invited around 100 school children at the zoo and distributed 200 saplings among them. Beside this, we have also planted 200 saplings, the director, Renu Singh, told PTI.

We have set a target of planting at least 50,000 saplings in the zoo.

Sharing details on the types of saplings being planted as part of Van Mahotsav celebrations, National Zoological park curator R A Khan said, from herbs, shrubs, hedges, to fruit bearing trees such as Jamun (black plum), Jatropha and Moulsari, variety of saplings are being planted and will be planted.

The officials are of the opinion that zoo can contribute in improving the deteriorating air quality in Delhi. Ms. Singh said to PTI,

Zoos make a lot of contribution. There is no noise pollution in the zoo. The temperature here is at least two to three degrees Celsius less as compared to outside. It’s greenery in the heart of the city.

World Health Organisation (WHO) 2018 report on global air pollution, placed Delhi among 20 most polluted cities in the world- 14 of which are in India, in terms of PM 2.5, in terms of PM 2.5. Earlier in June, Delhi-NCR recorded the level of particulate matter 10 (PM10), particles with diameter less than 10mm, way beyond the annual permissible limits of 60ug/m3. Some areas like East Delhi’s Anand Vihar recorded a PM10 level of 929.

Just when PM10 levels in Delhi came down a bit, a plan was made to chop nearly 17,000 grown trees for the purpose of redevelopment of central government accommodations in various areas of South Delhi including Nauroji Nagar, Netaji Nagar and Sarojini Nagar. Though the plan has now been stalled till July 26, but the project has not been canceled. The high court on July 4 asked the government run National Buildings Construction Corporation (NBCC), which is overseeing the project, “We could understand if it was a road-widening work which is inevitable. You want to cut thousands of trees for housing. Can Delhi afford this?”