New Delhi: Tamil Nadu is one of the best performing states when it comes to health indicators in India, however, in the recent Health Index Report by NITI Aayog, the state scored a good ninth rank but compared to its earlier rank 3 in the previous year, it is a decline. The report in question is tittled ‘Healthy States Progressive India’ which factored in 23 indicators such as stunting and infant mortality, under-five mortality rate, mental health or illnesses, among others.

According to the report, the State’s “most deteriorated” indicators are – proportion of low birth weight among newborns, integrated disease surveillance programme reporting, proportion of community health centres (CHC) with a grading of four points and more, to list a few.

The performance of Tamil Nadu, as per the report, also declined in full immunisation coverage, institutional deliveries, tuberculosis case notification and treatment success rate, vacancies of medical officers in Public Health Centres and percentage of functional 24/7 Public Health Centres. The State made negative incremental progress (-2.97) from 2015-16 to 2017-18, bringing itself under the category of ‘Not Improved’ States. This incremental performance measures the change in health index score from base year (2015-16) to reference year (2017-18) on the basis of the progress made. 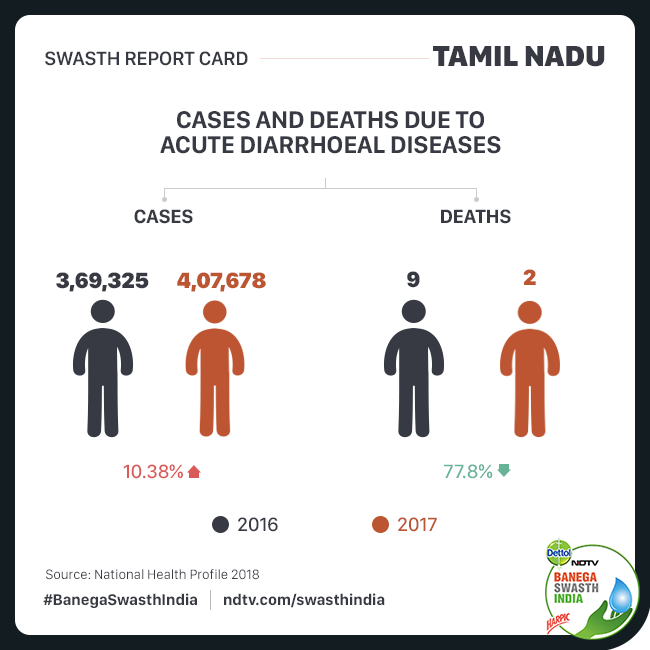 Cases of Diarrhoea and Diarrhoeal deaths in Tamil Nadu

Banega Swasth India: Nutrition Experts Weigh In On The Crisis Of Malnutrition In India