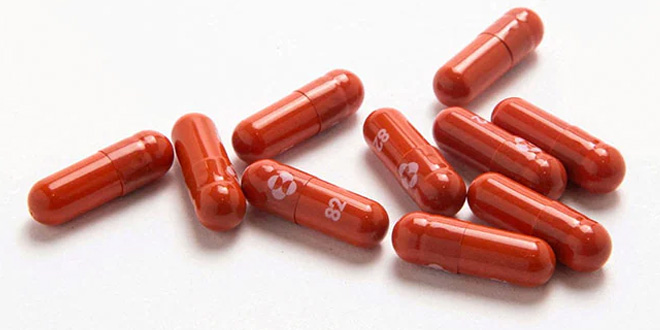 New Delhi: In the last week of December 2021, the Drugs Controller General of India (DCGI) granted Emergency Use Authorisation (EUA) to manufacture and market the anti-COVID drug ‘Molnupiravir’. The oral antiviral medicine ‘Molnupiravir’ is developed by US pharma giant Merck in collaboration with Ridgeback Biotherapeutics. Merck has licensed the Molnupiravir to more than a dozen firms that will manufacture it in India. As per a press release dated December 28, 2021 by Sun Pharmaceutical Industries Limited, the DCGI has approved Molnupiravir for treatment of adult patients with COVID-19, with SpO2 (oxygen saturation) over 93 per cent and who have a high risk of progression of the disease including hospitalisation or death. Sun Pharma is one of the companies to manufacture and supply a generic version of Molnupiravir in over 100 low and middle-income countries (LMICs) including India.

To know more about the anti-COVID drug, NDTV spoke to Dr D Srinivasa Reddy, Chairman and Managing Director, Optimus Pharma Private Limited, one of the companies which will manufacture the pill in India. Optimus Pharma has launched the tablet under the brand name Molcovir.

5 Things To Know About Molnupiravir

1. Molnupiravir is the oral antiviral for the treatment of mild to moderate COVID-19 in adults.

2. It is a prescription only pill under the emergency use authorisation. Molnupiravir will not be available over the counter.

3. The recommended dose of the drug is 800 mg twice a day for five days. The five-day course consists of 40 tablets. This breaks down into eight tablets a day – four to be taken in the morning on an empty stomach and four in the evening.

4. The cost of the full course is Rs. 2,500 which can and will be brought down to a few hundred, informed Dr Reddy. He said that his company is continuously working on reducing the cost so as to make the drug affordable for everyone.

5. Dr Reddy informed that in a clinical trial involving over 1,200 subjects in India, 75 per cent of the COVID patients who took Molnupiravir tested negative after five days. He added,

In the case of standard care, only 46 per cent of the patients tested negative after five days. Most of the patients took two weeks to recover and in some cases, the recovery period was longer – up to 28 days.

Dr Reddy feels that the EUA has been given at the right time as India is witnessing another wave of COVID-19 due to the Omicron variant. Talking about how it can aid in treatment, Dr Reddy said,

The tablets are to be given only when individual tests COVID positive mainly in case of mild to moderate disease. It is a really good product for home quarantine people; can start immediately after testing positive or start as early as possible.

Also Read: COVID-19: WHO Chief Scientist Calls For An Urgent Ramping Up Of Teleconsultation Services To Tackle The Third Wave In India

In an interview on December 30, Dr Reddy said that in a week’s time the pills will be available in the market. The early rollout will focus on tier 1 cities. The company aims to manufacture 40 million capsules per month.

Dr Reddy said the company is also in talks to make a second Covid pill, PAXLOVID, which was developed by Pfizer and showed an efficacy of 90 per cent as compared to 30 per cent for Molnupiravir. Once PAXLOID obtains EUA, it could be ready for use in India by Optimus in five months, Dr Reddy claimed. He said it will be expensive than Molnupiravir and could cost four times the price of the Merck pill.

In a media briefing on January 5, the government cautioned about the use of Molnupiravir which is being manufactured in India despite getting the EUA. While addressing the media, Dr Balram Bhargava, Director-General, Indian Council of Medical Research said,

We have to remember that this drug has major safety concerns. It can cause teratogenicity (ability to cause defects in a developing foetus), mutagenicity (permanent transmissible changes in the amount or structure of the genetic material), cartilage damage and can also be damaging to muscles. It is not included in the National Task Force treatment. The World Health Organisation (WHO) has not included it. The UK has not included it as of now.

Interestingly, with a view to turn India into a manufacturing hub, Merck had entered into licensing agreements with eight domestic drugmakers to make and supply generic versions of Molnupiravir to over 100 low and middle-income countries. A total of 13 companies in India will make Molnupiravir, the health ministry announced last week. Earlier this week, Dr Reddy’s Laboratories, an Indian drugmaker, announced that it plans to launch a generic version of the Merck drug from next week.

As per a report by news agency Reuters, Dr Reddy’s Laboratories will sell the generic drug under the brand name ‘Molflu’ and the entire treatment will cost 1,400 rupees ($18.77). In comparison, the treatment with Merck’s pill in the United States costs $700.