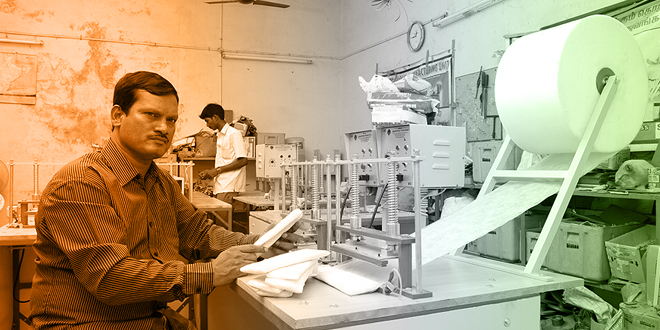 New Delhi: Arunachalam Muruganantham today successfully runs a business named Jayashree Industries in Coimbatore. It was an alliance arranged by their families. Arunachalam 37-year old, a school drop-out back then was working as a factory labour in Coimbatore, a city where he had spent all his life got married to Shanthi.

The newlyweds soon settled down to the life of blissful domesticity. The trigger for Arunachalam to turn into an innovator came soon after his wedding, his wife’s monthly periods became a cause for concern for Arunachalam. Like millions of women in India, Jayshree would use cloth, which she would wash and reuse, unaware that this is unhygienic and can cause Urinary tract infection, yeast infection and even cervical cancer.

Arunachalam’s care for his wife’s health prompted him to opt for sanitary pads, which given their costs were more of a luxury than a necessity item for the young couple on a tight budget. To find a way around the problem Arunachalam decided to produce low-cost sanitary pads manufacturing machines which cost a fraction of the machines being used by MNCs.

In 15 years, Over 5,300 of these machines have been set up in all the states of India and additionally has been exported to 27 countries. Despite several offers from corporations to commercialise his venture, Arunachalam only sells it to women self-help groups or schools to produce their own sanitary pads and then sell the surplus. 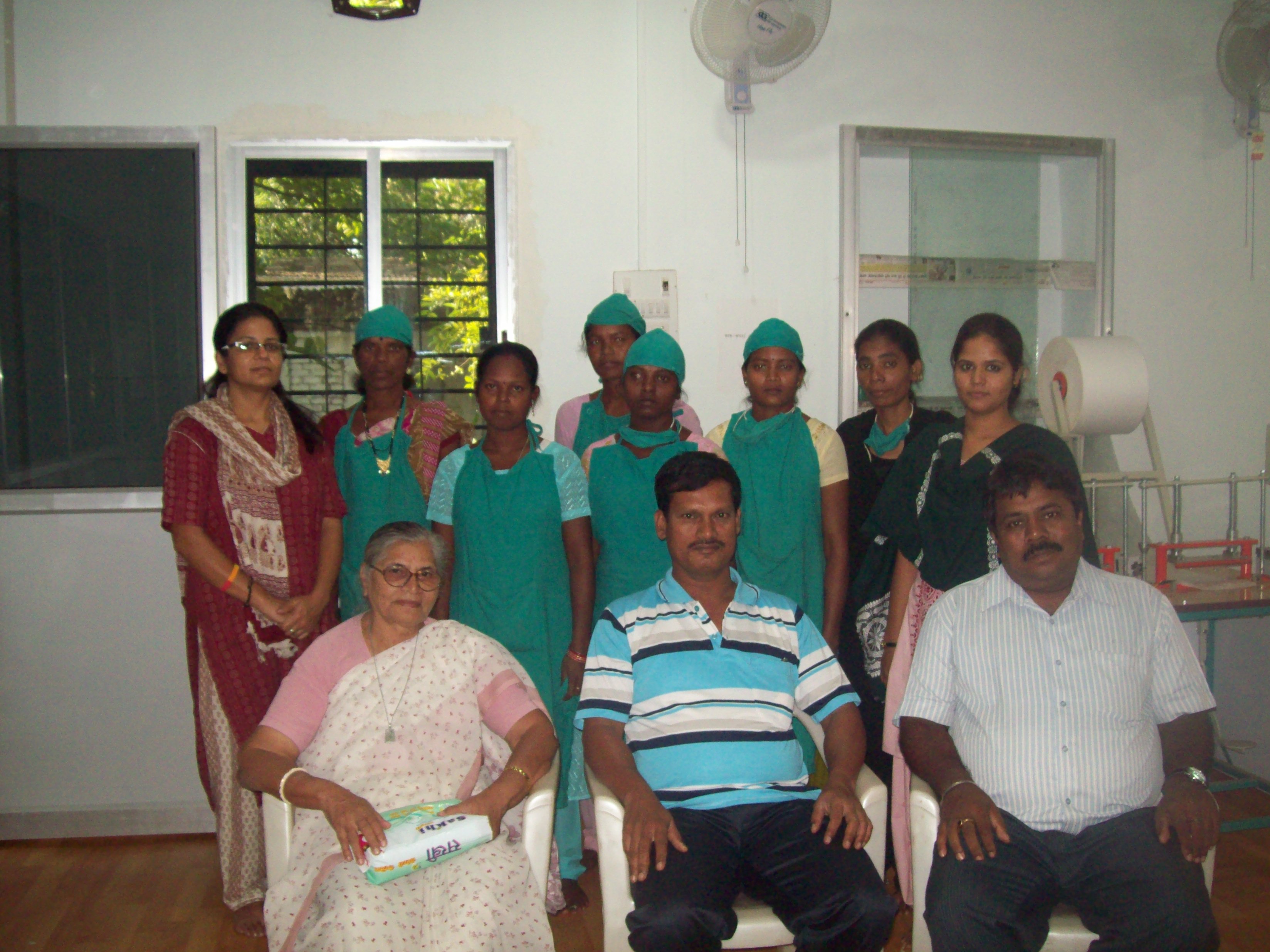 Despite several offers from corporations to commercialise his innovation, Arunachalam only sells his low-cost sanitary pad making machines to women self-help groups

Arunachalam’s machine empowers women by providing them sanitary pads at much cheaper rates than big companies and also creates jobs for them. He is a school dropout, with no degree in hand and yet, he has won the National Innovation Foundation’s Grassroots Technological Innovations Award at IIT Madras in 2006.

His innovation has made him one of India’s most well-known social entrepreneurs, TIME magazine named him one of the 100 most influential people in the world in 2014 and in 2016, then President Pranab Mukherjee facilitated him with Padma Shri Award. The movie Padman starring Akshay Kumar, based on a short story “The Sanitary Man of Sacred Land” from the novel The Legend of Lakshmi Prasad’ written by his author wife, Twinkle Khanna also won the National Award in 2019 for the Best Film on Social Issue. Arunachalam says that these honours bring a sense of responsibility to him in addition to motivating him,

At the end of the day, I keep the Awards aside and focus on the responsibilities they bring. I feel that my responsibility is to help create as many Padman and padwomen in India as possible. 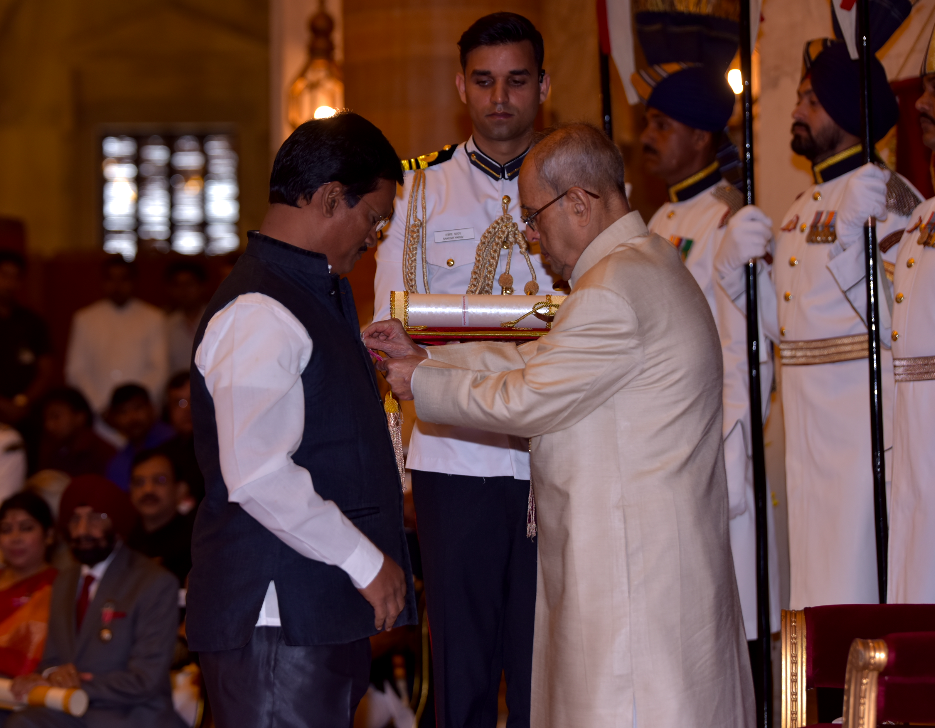 Arunachalam’s dedication to ensure every girl and women in India has access to affordable menstrual hygiene products as well as employment opportunities.

His work has also inspired many other entrepreneurs to enter this sector and take his innovation further. Talking about the success of his business model Arunachalam told NDTV,

I always wanted to address the root cause. Our model has made IT affordable pads available and accessible to rural women, with providing them jobs, but most of all why I think I have helped in addressing the root problem is that the stigma against menstruation is gradually fading. I helped in creating awareness and according to me, that’s my biggest achievement.

Turn a problem into a solution, seems to be the route, Arunachalam has used to achieve his mission. Due to lack of resources and funds, he would initially make a machine, travel with it to the district or village mainly in North eastern states and Bihar, to install it himself. What started with one machine, has now reached every state of the country and 27 other countries and has helped thousands of women to earn a living. 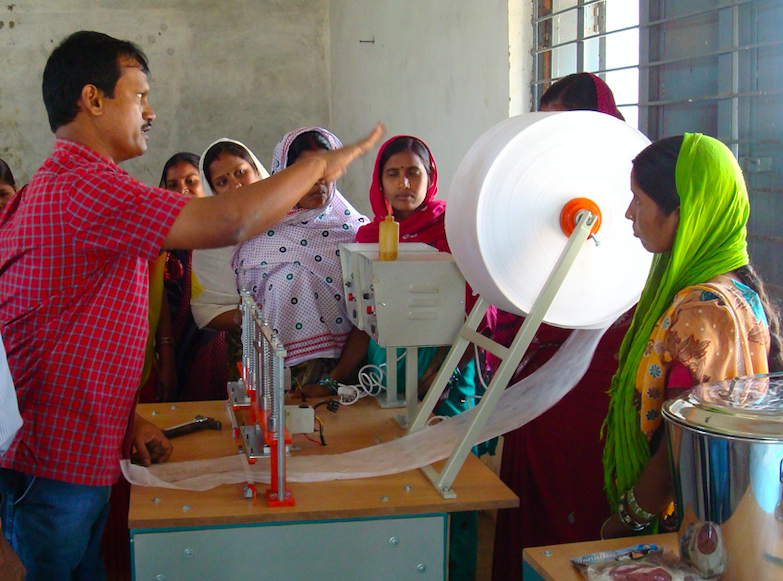 In 15 years, over 5,300 of Arunachalam’s machines have been set up in all the states of India and has been exported to 27 countries

NDTV reached out to some of the people using Arunachalam’s machines, to share their experience. Jayanthi from Tamil Nadu’s Irulur Village said,

It’s been 4 years since we installed Padman’s machine. We are 8 women working in this unit to make pads and sell it to our local Irulur community. It is really sustainable and it also creates happy livelihood for me and my colleagues.

On the other hand, Brother Arputharaj, Principal of Chennai’s St. Louis College said,

We are happy to bring this initiative to our college, initially we bought a machine just to motivate our students with Arunachalam’s inspiring story. Once the machine got installed, we came to realise how useful it is for the underprivileged girls in our college and also in the communities nearby. Now we are happily providing free pads to underprivileged girls and they are hugely benefiting from this.

Despite girls and women across India benefitting from his machine, Arunachalam says we still have a long way to go and holds the taboos associated with menstruation as the biggest barrier for women in accessing menstrual hygiene products, as he told NDTV,

In India and in fact around the world, we have hundreds of myths around menstruation and it is considered as a taboo topic. I feel that there has to be conversations around the topic within family and community. The need of the hour is to educate people on need for menstrual hygiene management. I always say- this issue is cannot be solved by retailing or E-tailing, we need to go for detailing! 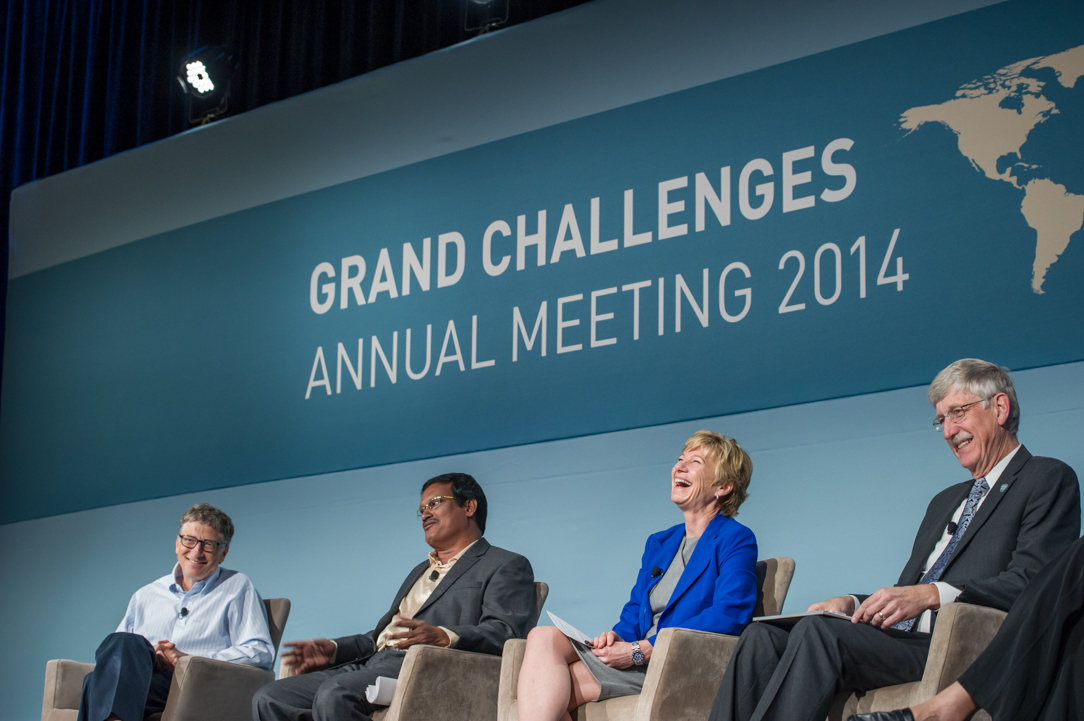 Bill Gates and Arunachalam Muruganantham at the panel discussion: Creating Cultures of Innovation during the Grand Challenges Annual Meeting in Seattle, 2014

Apart from lack of awareness towards menstrual hygiene, Arunachalam says that other barriers include affordability and availability. Talking about the current status of people’s perception towards menstruation in India, he says,

If you see, the words periods and pads have been discussed more in last year or so than in last century. That means, people are coming out to speak on it. From a time when even mothers would be uncomfortable to talking about periods with their daughters we are transitioning into a time where men are also openly discussing the subject. This is where movies like PadMan, among others, have been able to spread awareness and open up a gateway to dialogue. A movie about menstrual hygiene awareness also went on to win an Oscar! This has changed a lot of people’s opinion and perception towards menstruation even though there’s still a long way to go.

When asked about what the future holds for Arunachalam, he says he wants to create jobs for one million women through his work, and that he’s really keen to start a new venture supporting sustainable farming practices in India.

Arunacham also told NDTV that it was his dedication and will that kept him going towards achieving his dream, despite not having a concrete educational background. On the occasion of Independence day, he wishes to communicate the same message to the people who are trying to help people,

Flags That Grow Into Plants, This Independence Day #BeatPlasticPollution With This Nature Friendly Alternative