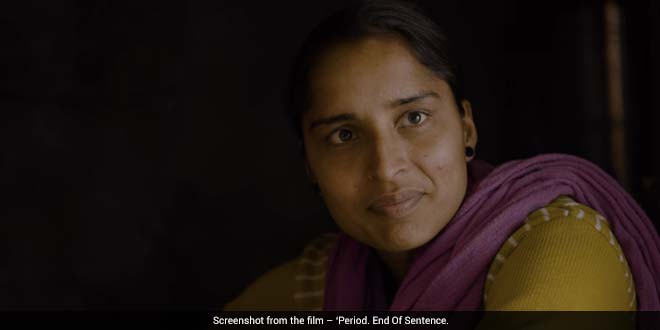 New Delhi: “Period? I know what it is, but I feel embarrassed. I can’t say it,” said one of the many adolescent girls, the film makers asked about menstruation or ‘Mahawari’. When the crew asked a group of boys however the response was beyond appalling.

“Is it related to the periods in schools? Where the bell rings after every period?” said one of the boys.

“I know ‘Mahawari’, it’s a disease commonly affecting women,” said the other boy, with utmost conviction.

Set in Hapur district of Uttar Pradesh, approximately 60 kilometers east of Delhi, the 91st Academy Awards nominated short film, ‘Period. End Of Sentence.’ breaks silence on menstruation with Sneh’s story, who hails from Kathikera village and the pad unit which was set up in her village in 2017.

The film is handled with a sensitive touch, benefitting a subject that has long been considered taboo in India. It includes responses from men and women belonging to different age groups, providing varied perspectives, all depicting the common trend of unawareness and stigma attached with the topic of menstruation.

The naïve responses and hanging heads filled with shame not only makes the audience uncomfortable but also infuriates their soul, as they go through this unique reality check. The manufacturing unit, that changed the lives of the women of Hapur, is an outcome of an enterprise initiated by young women working on farms. The unit was brought to the village through the joint efforts by the organisations Action India, The Pad Project, Girls Learn International and Feminist Majority Foundation, with the help of the original Pad Man – Arunachalam Muruganantham, who also makes a cameo in the documentary. Mr. Muruganantham quotes in the film with pride and sentiments,

The strongest creature created by God in the world is not the lion, not the elephant, not the tiger… it’s the girl.

‘Period. End of Sentence’ is one of the five films that have been nominated under short documentary category in the 2019 Oscars. Gouri Choudhury the founder of Action India said,

Last year, the initiative was filmed by a team from Sikhya Entertainment, led by Guneet Monga as Executive Producer, (director of the Bollywood film The Lunchbox). The script was directed by the award winning Iranian-American Director Rayka Zehtabchi.

The women of Kathikera produce ‘Fly’ sanitary napkins, engaging 16 women in the manufacturing process and providing them a means of livelihood as well as a hygienic option for menstrual hygiene management. Among other challenges faced by the ladies, as shown in the film, an eco-friendly pad is definitely one of the major concerns for them. NDTV asked Ms. Choudhury about the current status of the residents of Kathikera and the challenges being faced by them to promote a menstrual hygiene product in the village, she explained,

So far we have been able to set up two pad-making units in Hapur district producing 1500 pads per day. The challenge faced is in producing an eco-friendly sanitary pad at an affordable price and at the same time to make the enterprise economically viable. Difficulty in the availability of electricity is also something you will get a brighter idea about, when you watch our film.

With the wide popularity being gained by the film, the makers and other people associated with the film have just a single aim as they explain – A period should end a sentence, not a girl’s education, which unfortunately is the most common reason why girls drop out of schools, another fact discussed in the 25-minute-long documentary.

The documentary also portrays that mindsets change with time. Women who earlier could not find the words to talk about period are now finding it easy to talk about the topic by the end. Sneha told NDTV,

We don’t consider it to be a shameful topic now, the negativity associated with it is fading by the day.

In the two years since the machine was set up in Kathikhera, the women have taken their product to about 40 villages. A second machine was recently installed in the nearby village of Sudhna, assisted by The Pad Project. There’s still a lot of work to be done. But as the documentary shows, change is possible, especially when women take matters into their own hands. The film continues to inspire students and girls to realise their power and the impact young women can create.

A Step Towards New And Green India: PM Narendra Modi Flags Off The World’s First Diesel To Electric Locomotive In Varanasi