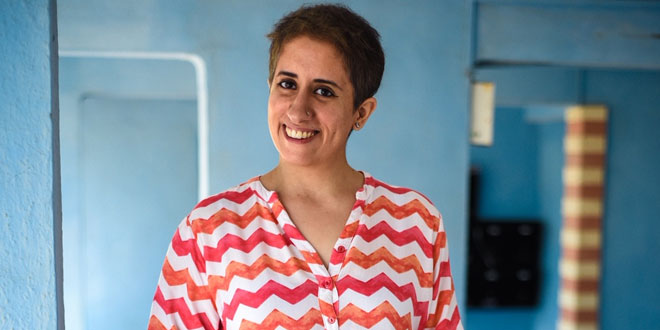 New Delhi: It was a well-deserved scenes of jubilation that followed the announcement of the Oscar winner in the best documentary on short subject category at the 91st Academy Awards, given its strong India connect, be it the subject matter or those behind the execution of the film. But what cannot be ignored is the fact that the true win for ‘Period. End of Sentence’ is that it put the spotlight firmly on the  taboo topic of menstrual periods and the stigma women still have to bear because of this natural process every month for a large chunk of their growing up years and adult life.

The 26-minute film follows women in Hapur district of Uttar Pradesh who decide to fight age old, deep rooted biases about menstruation. The film also delves into the work of real life ‘Pad Man’ Arunachalam Muruganathan, who devised low cost sanitary pads for women in rural areas and how he helped the women in Hapur get a sanitary napkin manufacturing unit in their village. Mr. Muruganathan also makes a short cameo in the movie.

NDTV had an exclusive chat with the Producers Guneet Monga and Mandakini Kakar from Sikhya Entertainment who told us everything about their journey from Hapur to Los Angeles in a phone interview from LA.

Question: What was the inspiration behind making this movie? How was the idea conceived and where did it all start?

Guneet: It began with a couple of school girls and their English teacher Melissa Berton in Los Angeles, who read in an article that majority of school girls in India – mainly rural India, do not have access to menstrual hygiene products due to which they are forced to drop out of schools once they get their period. They all came together to donate one pad machine worth $2000 when they thought they could maybe make a documentary for a larger impact and that maybe that movie can help them raise more money for the cause. So, it all started from there, all these school students got in touch with an undergrad senior student pursuing film-making in University of Southern California’s School of Cinematic Arts, Rayka Zehtabchi to direct the film. Once she was on board, the writers got together and the team contacted me and Sikhya Entertainment for help and guidance, that’s how I got involved and then I got Mandakini Kakar on board as a Producer since she is Delhi based and someone needed to constantly travel to Hapur back and forth.

Question: What are the things that you learnt about women and their awareness about menstrual hygiene in rural India while making this documentary?

Guneet: I’ll let Mandy (Mandakini) take this question as she was the one who travelled to Hapur back and forth and is more in touch with the on ground reality.

Mandakini: I think the most shocking thing is that Hapur is just about 60 kms away from Delhi, you don’t expect a place situated so close to the national capital itself to be so misinformed and living in so much stigma attached to menstruation. As you can see in the film, they did not know how to explain what a period is! How young girls from the new generation living in the village have not even seen a pad in their lives. When we gave them a pad and asked them to use it, their response was okay but how? So, I would say that was truly an eye-opener for us.

Question: For a documentary on the topic of menstruation set in rural India to win an Oscar, how significant is this win for the cause and for you as a filmmaker?

Guneet: I think our Oscar and the film itself definitely a massive conversation starter. When you have the biggest mouthpiece or loudspeaker in the world, it is important to focus on real issues. A moment one would wait for, now that the conversation has begun, we can start the outreach from here and now I would like to see the men get involved and spread awareness about menstruation.

Question: What were some of the challenges faced during shooting of the documentary in Hapur? How did people react to the subject?

Mandakini: I realised this much later but while working on the documentary, when I would go home and my parents would ask, what are you working on and I told them it’s a documentary on menstruation, it was probably the first time I openly spoke to my family about it. And this is when I come from a quite well educated, urban family. So going into a village and getting the women to talk about periods and on top of that getting the men to talk, I think that was by far the greatest challenge that we faced as a unit.

Question: Hapur acted as a case study but in reality there are lakhs of villages in the country where the situation may be worse. What do you think is the need of the hour? What can the government can do to ensure 100% menstrual hygiene coverage.

Guneet: I think step one is obviously installing these pad manufacturing machines in the villages and step two is without a doubt ensuring a constant flow of electricity. I say this, because the pad machine we installed in Hapur, electricity was the biggest challenge. We only discovered this when the operation was up and running and Action India has now been able to install another machine in Soodna, another village near Kathikera, along with working on three more units and access to electricity is the biggest hurdle when it comes to their work flow and the number of pads that they can make and distribute.

Mandakini: To put it in perspective, out of the 24 hours, they get electricity for hardly 5 hours, on a good day.

Question: In the documentary, Sneha rightly mentions that it is because of patriarchy that women, especially from a village like Kathikera, take time to succeed in their dreams and passion. She also says that the men are aware of the manufacturing unit and that they are making sanitary napkins but they act like they don’t know what it means. What is their reaction now that it’s become a major talking point?

Mandakini: I went back to Kathikera just 15 days before we left for LA and I did notice a massive change there. Women there no longer see the need to hide their sanitary napkins. These pads are being sold in the open unlike before and they even manufacture the pads proudly. Girls are going in the open and buying sanitary napkins and we felt so proud to see the change. It’s really been a revolution!

Question: What did you learn about men’s attitudes towards the issue during filming?

Mandakini: It is a difficult question because women themselves had such lack of awareness when we went for the first time. I actually feel like the men were more ashamed to talk about the subject than the women. And then getting the men to talk about it on camera was a challenge in itself. They wanted to say pad but they couldn’t say the word. So, yes I would say I learnt how men were also ashamed to talk about menstruation.

Question: What more can we expect from you in the future, any other issues that you are working on or feel passionately about?

Guneet: We at Sikhya Entertainment have made movies like The Lunchbox and Masaan and have had a long career of constantly putting India on the map and tell these simple yet complicated stories to the rest of the world. With ‘Period. End of Sentence.’ we have officially marked our entry in the documentary world. So you can expect more such projects from us in the near future.

Question: With you, Hapur is celebrating. The pictures of Hapur celebrating this victory are all over Twitter. How did the team present in Los Angeles, including Sneha, celebrate the win?

Guneet: Netflix threw us a massive party in LA itself, which was amazing. We were so overwhelmed and emotionally charged since we have been doing press till 6 in the morning. It’s a very different life here and we are quite away from India so I’m not very aware of how Hapur is celebrating but we cannot get back to celebrate with them.

Question: After this international recognition of your film, what is the one message that you want to send out?

Guneet: I think this has been quite a journey, from couple of school girls from LA to the girls and women in Hapur, finding their liberation and their empowerment. So I think this film is a classic case of one girl empowering the others. Whether it is India or LA, it shows how one girl can empower the other and then other and so on. It’s been an amazing relay race that we’ve come till here, empowering one another and holding each other’s hands.

From Waste Pickers To Artists, Here’s A Story Of Transformation Of Women From Ghazipur Landfill Area In Delhi