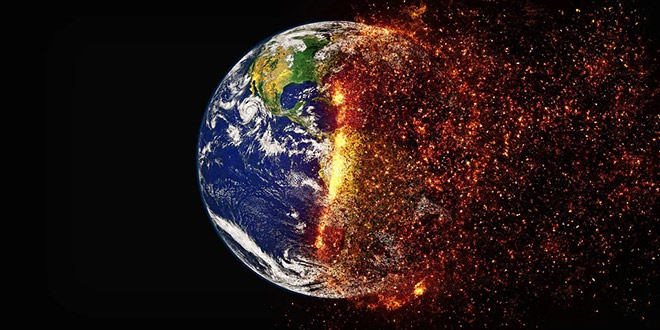 New Delhi: Natural disasters are becoming a regular occurrence in India. Be it the latest floods in Uttarakhand and Mahabaleshwar and other places or cyclones that are hitting the coastal states frequently, be it Amphan that hit West Bengal in 2020 or cyclone Tauktae which hit Maharashtra in 2021, among others. Even now, over 1,200 villages in Uttar Pradesh are battling flood fury. All these events are a clear signal that the threat posed by climate change is for real. In its report titled ‘Climate Change 2021: The Physical Science Basis’, the United Nations Intergovernmental Panel on Climate Change (IPCC) has clearly stated that scientists are observing changes in the Earth’s climate in every region and across the whole climate system. The report flagged that some of the changes such as continued sea-level rise are irreversible over thousands of years. In the backdrop of the IPCC report and latest findings, NDTV’s Banega Swasth India team spoke to Environmentalist Vimlendu Jha to dissect the report’s findings and its implications for India. Here’s an excerpt from the interview.

NDTV: What are your takeaways from the latest IPCC report?

Vimlendu Jha: The most important thing that the IPCC report tells is that now ‘if, but and maybe’ won’t work. There is no doubt about the existence of climate change. From a very decisive, data and science point, the IPCC report clearly states that climate change is happening and its impacts are visible. India and several other countries will definitely be affected severely by climate change in the years to come but the situation is already terrifying. It’s almost a code red that the IPCC report talks about that climate change is not an imagination or a possibility; it’s a reality. If we look at the main cause of the destruction or climate change, it’s economic growth. Human beings are the biggest threat to our planet and lastly, states, societies, and individuals should focus on well-being rather than working towards economic growth. The good thing about the report is that it has built multiple scenarios like if you will do this, then this will happen and there is data to back that. It also states the repercussions of not taking corrective measures. The global rise in temperature is about to hit 1.5 degrees Celsius by 2040. This means, the temperature that was supposed to rise in 40-50 years will now worsen in 20 years. That’s the best case scenario that we are talking about. And the worst case scenario is that if we don’t take an action even now then the temperature will rise by 4.4 degrees and its impact will be seen on our air, carbon sink, jungle, rivers and everything else. It is being said that a lot of Indian cities will drown.

NDTV: UN Secretary General has said that there is no time for delay and no room for excuses. India is among the top three countries when it comes to emissions. What can India learn from this report?

Vimlendu Jha: Per capita carbon consumption of an average Indian is less than various developed countries like America, Europe. But our greenhouse gas emission is number three because we have a population of 1.4 billion people. Though we have a smaller footprint, but when multiplied by 1.4 billion, it becomes a huge number. Therefore, for India, it is important to learn that it’s our responsibility to reduce greenhouse gas emissions, how we move towards a low carbon economy and how we make a transition in energy production. The second important lesson is that we come in a climate vulnerable region. The report clearly states that the Indian Ocean has warmed faster than the global average. India needs to build a roadmap and walk on the path of a low carbon economy. Infrastructure development is important but not at the cost of human life or tragedies or the environment.

We witnessed a cloud burst in Uttarakhand; heatwaves in various regions; extreme flooding in Kerala. These are not isolated events; they are all linked towards climate change and everyone will have to connect the dots. It’s important for us to understand that climate change in an inter-connected, comprehensive, collective and responsible way.

NDTV: Who is responsible for the recent disasters in the country and what can we learn from those disasters?

Vimlendu Jha: It will be incorrect to blame any one individual, organisation or government for climate change. It’s a collective failure and it lies in two things – firstly, we are unable to make sense of the fact that all of this is because of our behaviour, actions, and infrastructure development. Secondly, we are not reacting to it quickly. We don’t have a mitigation plan. We cannot stop floods but if we have faced them once in 2018, then we can learn and be prepared for it by not violating the law of land. We can cut trees to build flyovers but, tomorrow the air that we will have to breathe will be polluted. We cannot breathe for an exhaust pipe. We need trees to breathe oxygen. We can reach the moon, but we need air and water on earth also. If 60 per cent of the surface water is polluted it is high time we wake up and do something about it. Climate change will have to be broken down into minor, small, specific resource management of water, forest, air, people’s right over these resources. It’s then we will understand climate change and combat it collectively.

NDTV: What do you think is the cause of floods in Uttar Pradesh during this time of the year?

Vimlendu Jha: Clearly, it’s climate change. As in the extreme weather condition, extreme flooding, extreme rainfall in a short span of time and bad floodplain management that is what is leading to erratic flooding that we are actually seeing in villages of Uttar Pradesh. You also need to understand that if you cut a tree next to my house, I won’t get an asthma attack within the next one hour. The cutting of a tree won’t impact only me. If someone sitting in Haryana pollutes the air, it will affect Delhi’s air as well. It’s an air shed, watershed, shared carbon and climate that we are talking about. People in Uttar Pradesh are facing floods because of people like us, the high carbon footprint individuals, and the incompetency of the government. There is still a window of opportunity to fix it if we want to fix it.

Experts Call To Prioritise Reopening Of Schools, Stress On COVID Protocols And Vaccination