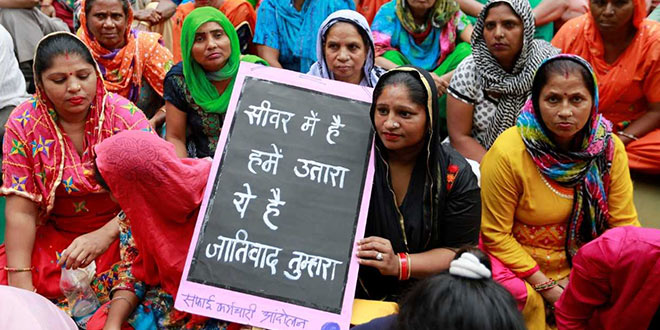 New Delhi: The relatives of thousands of Indians who died cleaning sewers protested in the capital on Tuesday, aiming to stop the practice of workers entering underground drains to unclog them and remove waste with their bare hands. Hundreds of protesters shouted slogans accusing the government of delaying compensation for sewer deaths, while others waved banners saying they came as Prime Minister Narendra Modi pushes his “Swachh Bharat,” or “Clean India”, programme.”I lost my only son,” said Saroj, a mother among the protesters, who hails from the northern city of Ludhiana in Punjab. “He went into the sewers and never came out. How long will these deaths continue?”

One placard read, “Eleven workers died in the sewers in seven days. ‘Swachh Bharat’ for whom?” About 1,800 sewers cleaners have suffocated to death in the last decade, says the Safai Karamchari Andolan (SKA), a group that is campaigning to eliminate the practice. Most of the roughly 160,000 workers involved in cleaning human waste are women, it added.
In 1993, India outlawed what it calls “manual scavenging”, a practice that includes the barehanded cleaning of dry latrines, mostly by women and Dalits, who are at the bottom of Hinduism’s social hierarchy. For centuries, Dalits have battled discrimination ranging from segregation and ostracism to violence. Hindus are traditionally grouped into thousands of castes, their membership determined by birth.

Some members of India’s lower castes still engage in unsafe cleaning practices, including the capital, where recent deaths sparked off the protests. Workers picking up human waste with bare and broomsticks are a common sight on railway tracks and stations across the country.