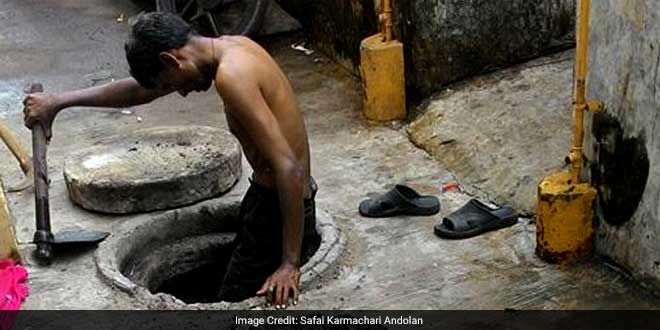 Despite being an illegal activity, over 50,000 people are employed in manual scavenging. The numbers are big, despite the survey not being completed yet. The numbers are alarming and the government must do something drastic to address the growing number of manual scavengers in India. With the large number of toilets built in the last four years, we fear that manual scavenging will only rise, said Magsaysay Award winning activist Beswada Wilson, founder and convener, Safai Karmachari Andolan.

“The data from the other states is expected to arrive soon, and we will get the real picture once the survey is completed. More than 11,000 manual scavengers have received a one-time assistance of Rs 40,000 towards their rehabilitation. Further, under the Indira Awas Yojana, we have made provisions to provide housing facilities to manual scavengers in rural areas. Even members of non-below poverty level families, engaged in manual scavenging, can avail this facility,” said Surendra Singh, Joint Secretary, Ministry of Social Justice and Environment.

Such measures however, have failed to solve the problem of manual scavenging, says Beswada Wilson. New legislation which increases penalties and fines on those who employ manual scavengers is needed to address the issue on an emergency basis, feels the award winning activist. Mr Wilson also said that the ongoing survey would be a good time for Prime Minister Narendra Modi to speak extensively about manual scavenging and promise to take steps to put an end to the practice. If people heeded to him and became conscious about safe sanitation, they may listen to him and stop employing manual scavengers, felt Mr Wilson.

Taking A Green Lead, Ahead Of Van Mahotsav, Gujarat Forest Department Ditch The Use Of Plastic Pots