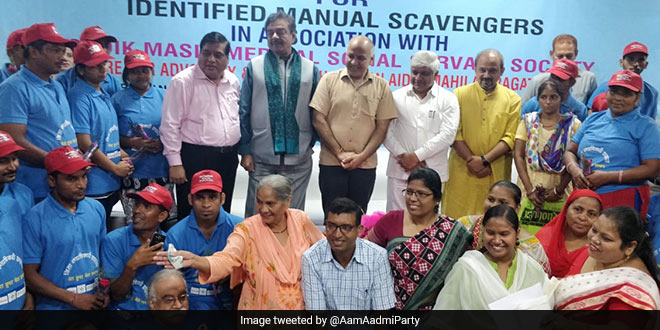 New Delhi: The Delhi government seems to be on track with its efforts to eradicate manual scavenging and provide a life of dignity to manual scavengers. After deciding to hire 200 sewer cleaning machines to help in cleaning drainage systems in the national capital, the Delhi government on August 24 held a workshop at Shahdara on skill development for manual scavengers. The workshop, held by the Deputy Commissioner (Shahdara) K. Mahesh, was attended by Deputy Chief Minister Manish Sisodia and BJP MP Shatrughan Sinha. The workshop will train and skill 28 people presently engaged in manual scavenging for the past 5 to 15 years.

Despite the Swachh Bharat Abhiyan entering its fifth year this October, manual scavenging has remained a largely unaddressed area by the campaign. A survey to identify the number of manual scavengers across India missed its deadline of April 30, and the problem of several states like Telangana, Andhra Pradesh and Himachal Pradesh denying the existence of the practice banned by law, continued while the survey was being carried out. Amidst such a scenario, the Delhi government’s workshop on skill development for manual scavengers comes as a welcome step to train them and help them lead a life of dignity.

Manual scavenging is a job which still forces many people across the country to clean dirt and faeces with hands, which affects their health and social status. Eradication of manual scavenging is of course important, but many of these people have only been engaged in this profession and do not have the necessary skills to fit themselves in any other profession. With the required skills, these people find other professions post rehabilitation, said Mr Mahesh.

The workshop will train the participants in housekeeping by Delhi government staff. The Deputy Commissioner had formed a special team identify manual scavengers in Shahdara and by February 2018, 28 manual scavengers were identified for skill training. The training will go on for a period of three months, and during the training period, the trainees will be paid a stipend of Rs 1,000 per month. Post completion of training, the trained workers will be provided with jobs in the housekeeping sector with minmum wages.

BJP MP Shatrughan Sinha, who attended the skill development programme, praised the AAP government’s efforts to rehabilitate manual scavengers and help them develop the necessary skills to find alternative forms of employment. Delhi’s Deputy CM Manish Sisodia said that the programme was a pilot project, and in future, such rehabilitation programmes will be implemented in all districts of Delhi.

Yesterday, I was privileged to be part of a skill development program to rehabilitate manual scavengers, organized by District Magistrate, Shahadara. The good being done by AAP Govt for the low & downtrodden people of society is very remarkable & praiseworthy. The complexities..

“This is a welcome step for manual scavengers in Delhi, who have not received much assistance from the Centre despite for years of Swachh Bharat Abhiyan. People who have only been manual scavengers all their lives will need some training to settle in alternative professions. Such initiaitves must be taken on a national scale as well, to train as many existing manual scavengers as possible,” said Magsaysay Award winning activist and founder of Safai Karmachari Andolan, Beswada Wilson.

The Delhi government has also set up a vigilance committee in every district to report any deaths due to manual scavenging, and keep an eye on people employing manual scavengers. As the rhetoric of toilets being built and number of open defecation free districts and cities grow stronger, not much has been said how manual scavengers will be rehabilitated. Delhi’s skill development programme for rehabilitation of manual scavengers is a small but committed beginning that can pave way for dignified lives for several manual scavengers across India.

Towards A Zero-Waste Future: 23 Global Cities Commit To Avoid Disposal Of 87 Million Tonnes Of Waste By 2030