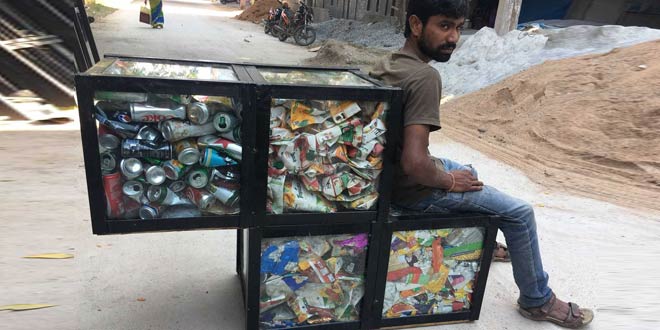 New Delhi: Many cities in India continue to struggle with its garbage piles, but Hyderabad is one city which has started taking advantage of its trash. The Greater Hyderabad Municipal Corporation (GHMC) in collaboration with a local recycling enterprise came up with the idea of using all the city’s discarded items like plastic packets, cans, rubbers, glass and  fashion them into street furniture.

The idea was put into the execution stage after the civic body met with very little success in implementing waste segregation since the World Environment Day (June 5), when the two-bin system was launched across the India. Merely 30 per cent of the total 44 lakh households in the city practice waste segregation.

Even though it has been six months since the two-bin system was launched, the concept hasn’t yet percolated down completely. A few months back when a bus shelter was made out of PET bottles it had grabbed a lot of eye balls. So we decided to continue the ‘waste-to-wealth’ policy inorder to spread awareness on waste segregation.

The bus shelter out of PET bottles was a brainchild of 42- year old Prashant Lingam and his wife Aruna Kappagantula. The couple founded Bamboo House India in Hyderabad, and has been behind innovations like a conference hall out of bamboos and a number of furniture items out of trash. 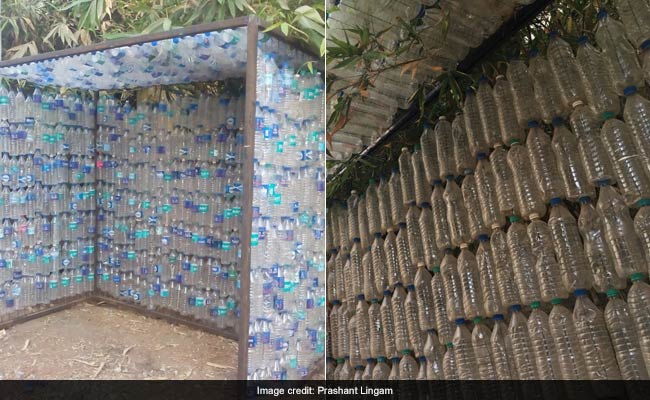 Bus Shelter made out PET bottles

Also Read: This Hyderabad Husband-Wife Duo Are On A Mission To Reduce Plastic Waste In India 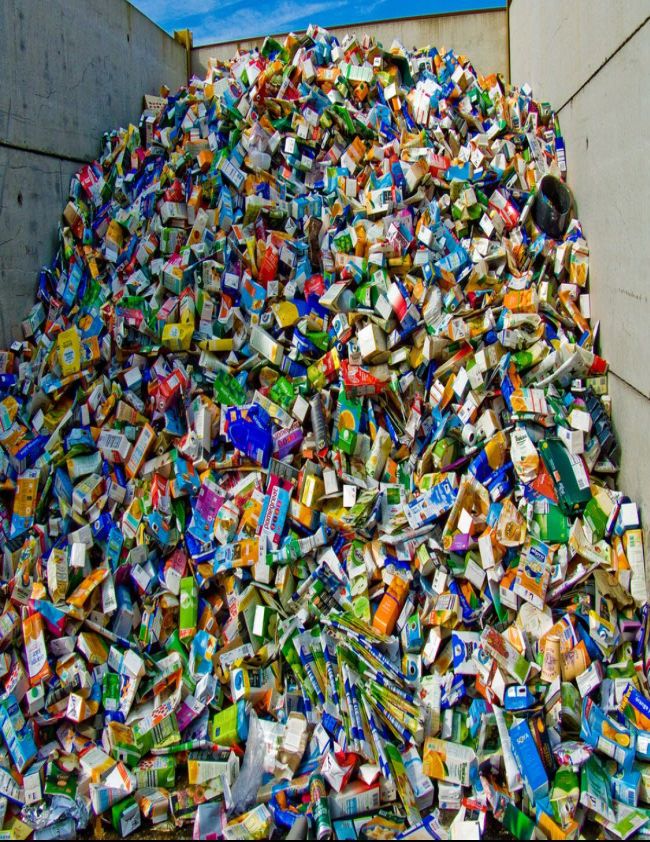 1,000 kilos of dry waste will be recycled to make street furniture

1 tonne of waste comprising plastic bottles, chips packets, beer and coke cans, umbrellas and other items were deposited in the collection centre. When we approached the GHMC with the street furniture idea, they immediately got on board and asked us to display it during the Global Entrepreneurship Summit (GES), which will be held in Hyderabad from November 28 to November 30, says Prashant.

Prime Minister Narendra Modi will inaugurate the flagship summit organised by India in partnership with the United States. Ivanka Trump, the first lady of United States will be leading a high-profile delegation that will highlight the theme ‘Women First, Prosperity for All’, and focus on supporting women entrepreneurs and fostering economic growth globally. 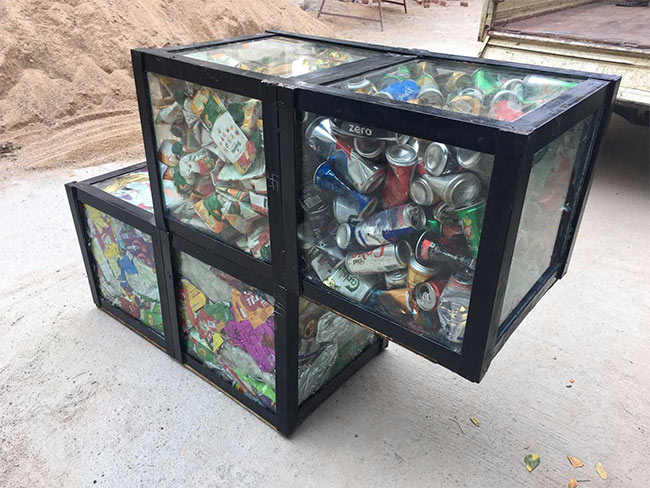 Also Read: These Hyderabad Swachh Warriors Aim To Build 100 Bus Shelters Out Of Plastic Bottles In Next 24 Months

With the curator of Swachh Bharat Abhiyan and Ivanka Trump inaugurating the summit, Prashant and his team of 16 artisans want to put their best foot forward. And with a tonne of waste to be recycled, the team is working in two shifts. About 20 bench-like structures have been made from 8mm toughened glass and metal anglers. The cube stools are filled up with tetra packs, cans, chips packets, plastic bags, metal wires, old shoes and other dry wastes. The stools also have facts and figures related to garbage crisis to spread awareness on the issue says Prashant . These stools will be displayed on the roads leading to the Hyderabad International Convention Centre (HICC) in a few days. 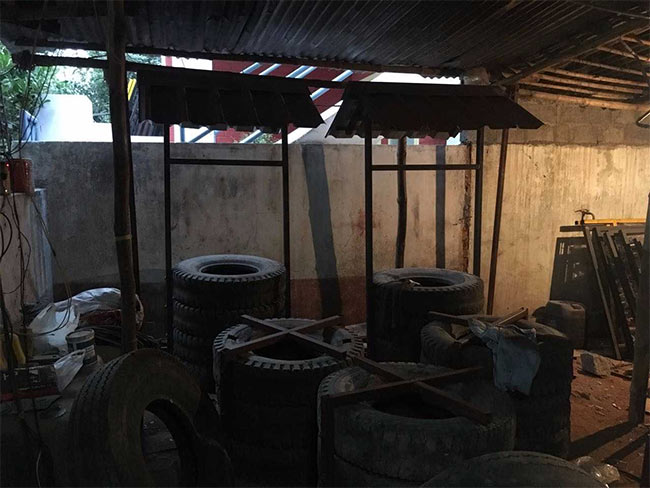 In addition to the stools, the waste is also being used to make sofa sets out of tyres, chairs out of scarped materials. A pyramid of plant stands made out of tyres will also be displayed during the summit. To make people realise about how consumerism has taken a toll on our waste woes, the team will also build a ‘Trash Man’. 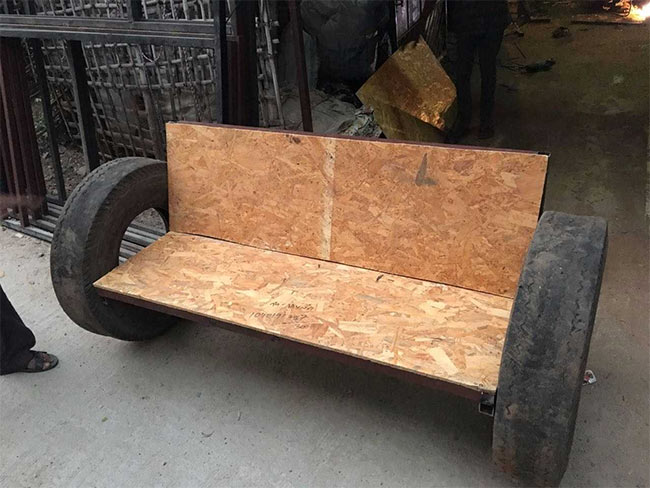 Sofa sets made out of discarded tyres

“Metal pipes and tetra packs will be used to make the body; old torn clothes will be used to cover the man. The upper body will be completely surrounded with the trash. The trash man will be the symbol of consumerism showcasing the amount of non-biodegradable waste we consume on a daily basis,” adds Prashant. The entire project of the ‘Bamboo House India’ is funded by the GHMC. 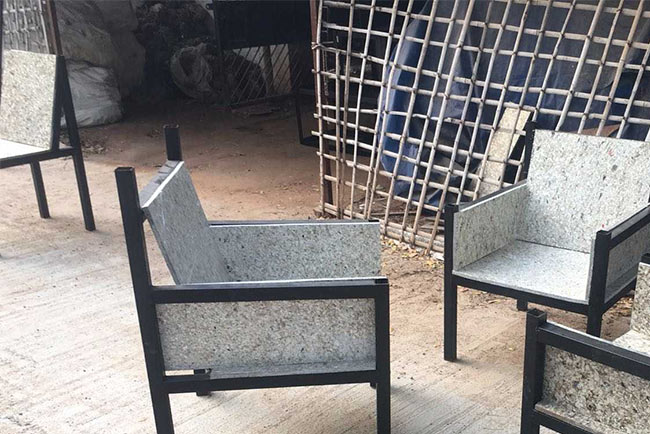 Chairs made out of tetra packets

Drones Deployed In This Town Of Telangana To End Open Defecation