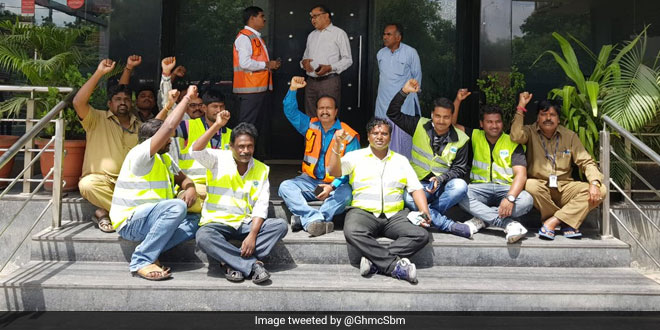 New Delhi: Encountering protests by environmental activists or waste collectors in front of civic body offices is not uncommon, as civic bodies’ inability to improve civic infrastructure is often met with demands for better measures. But in an interesting turn of events, Hyderabad witnessed a protest by officials from the Greater Hyderabad Municipal Corporation (GHMC) on July 18. The protest was staged by GHMC officials to convince large generators of waste such as restaurants and hotels to install composting machines within their premises.

Hyderabad, which ranked 27 in this year’s Swachh Survekshan (was ranked 22 in 2017) has worked extensively to encourage composting among bulk generators of waste, such as residential welfare associations, hotels and restaurants. GHMC officials have issued several notices to bulk generators over the last year, requesting them to set up composting infrastructure. But despite segregation and composting catching up across the city gradually, bulk generators have largely remained aloof from setting up composters. The city produces 4,500 metric tonnes of garbage daily, but the GHMC assumes that if bulk generators begin composting waste in their backyards, the amount of waste generated in the city will come down significantly.

Bulk generators of waste contribute 15 to 20 per cent of the city’s daily waste, and if they can end up composting the wet waste generated by them, the garbage generated daily will come down. We had approached several RWAs, hotels and restaurants and have requested them to compost their waste. But despite repeated requests, many of the bulk generators have not complied with our requests. This protest is a silent reminder to them to join our composting initiative, said Shruti Ojha, Additional Commissioner (Solid Waste Management), Greater Hyderabad Municipal Corporation.

“A number of bulk generators have already come together and assured us that they will compost waste within their premises. We have given them enough time to set up composting units and their participation in the composting programme will ensure that waste management becomes easier for Hyderabad,” said Ms Ojha.

Also Read: Beware Hyderabad: Your Discarded Plastic Item Will Be Exhibited Under The Black Bag Campaign