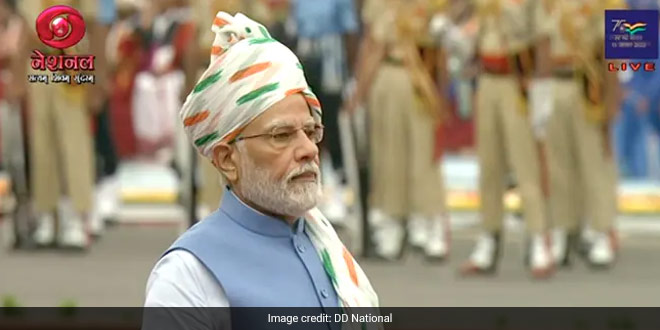 New Delhi: Prime Minister Narendra Modi on Monday (August 15) lauded citizens for coming together in the fight against COVID-19, and said India has administered a record 200 crore vaccine doses in a time-bound manner, a feat that would not have been possible for another nation. During his Independence Day address from the ramparts of Red Fort, PM Modi said there was an increase in common consciousness of love for the nation of late.

COVID-19 has been an example of this common consciousness where citizens came together. From supporting doctors to propelling research to taking vaccines to the remotest parts, we stood together. The country’s citizens stood shoulder to shoulder with ‘corona warriors’ with gestures such as clanging thalis, clapping and lighting diyas, PM Modi said in his speech.

He asserted that people from every nook and corner of the country also participated in the ‘Janta Curfew’ and this was indicative of a feeling of consciousness.

Lauding citizens for leading the way in taking vaccines, he added,

During the Covid period, when there was confusion prevailing in the world on whether to take vaccines or not or whether the vaccines were useful or not, even the poor people of my country’s villages surprised the world with the administration of 200 crore vaccine doses. This is consciousness, this is potential, which has given new strength to the country today.

The prime minister stressed that when the world was in a dilemma, India crossed the target of 200 crore vaccinations in a time-bound manner and broke all previous records.

We broke all previous records by administering 200 crore vaccine doses in a time-bound manner. Can any other nation do this, he asked.

Also Read: There Is A Need To Motivate And Strengthen ASHA Workers In India: Sushant Kumar Nayak From Odisha Government

The prime minister’s speech also highlighted India’s legacy of holistic healthcare and yoga that is proving to be beneficial for the entire world.

When there is a discussion on holistic healthcare globally, everyone looks at India’s yoga and Ayurveda and holistic style. This is our legacy that we are providing the world with. The world is being influenced by it today, he said.

Experience tells us that we can achieve our goals once we are determined, Modi said, adding be it the goal of renewable energy, the intention of building new medical colleges in the country or creating a workforce of doctors, the pace in every field has increased manifold.