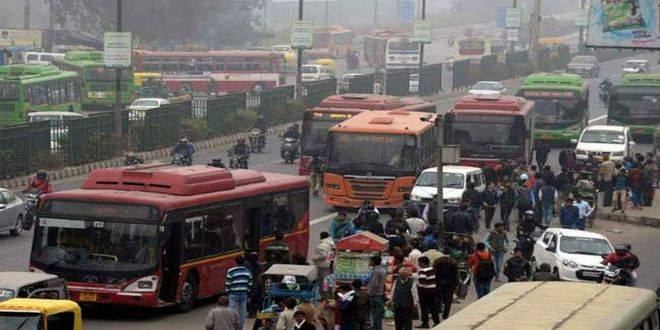 New Delhi: Exhaust from vehicles is a major source of outdoor air pollution which was responsible for over 3.8 lakh (3,85,000) deaths worldwide in 2015 out which 74,000 deaths occurred in India. This was found by a new study conducted by the International Council on Clean Transportation (ICCT), Milken Institute School of Public Health from George Washington University, and the University of Colorado Boulder. Out of the total number of transportation-attributed deaths in India, 66 per cent were caused by diesel vehicles. The study found that in 2015 on-road diesel vehicles were responsible for nearly half of the health problems created by pollution from transport worldwide.

Anumita Roy Chowdhary, an expert on air pollution at Centre for Science and Environment said,

This study has exposed serious health risk from transport emissions in India and particularly from diesel emissions. India will have to adopt stringent measures for controlling real-world emissions from on-road vehicles. Also, quicken its pace towards electric mobility to convert a sizeable number of trips to zero emissions.

According to the report, the majority of vehicle emissions related health impacts occur in the top global transport market like India, China, the European Union (EU) and the United States (US). In 2015, 70 per cent of the total air pollution attributed deaths in the world occurred in these four countries with the highest numbers being in China and India.

The study, which analysed the health impacts of air pollution caused by vehicular emissions in the period 2010-2015 found that premature deaths caused by pollution from vehicle exhaust increased from over 3.6 lakhs (3,61,000) in 2010 to over 3.8 lakhs (3,85,000 )in 2015 which is almost an increase of 6.6 per cent over just five years. These deaths, however, increased by 26 per cent in India and China.

According to Dr. Sachchidanand Tripathi, senior scientist at IIT-Kanpur,

Diesel emissions are well known for causing more damage to human health than fuels. It is because, in layman’s term, diesel has higher sulphur and particulate matter content which are very harmful to people. This study has quantified this harmful impact telling how many lives have been lost. We saw in the past few months that emissions from diesel vehicles have been the biggest reason for the high level of pollution in Kolkata, Mumbai, and Lucknow. All these cities have a high number of diesel commercial vehicles.

Talking about India’s efforts to reduce vehicular emissions, Dr. Tripathi said that though we are quite late in implementing measures to reduce pollutions, we are headed in the right direction. He said,

India is a signatory to Paris Agreement of 2013 and is bound to undertake such measures to reduce air emissions. However, we need that the central and state governments along with the implementing agencies at all levels become more stringent and take up combating air pollution in a mission mode.

– In the past year, the Supreme Court rolled out cleaner fuel standards which will become mandatory from April 1, 2020, and vehicles sold need to comply with Bharat Stage VI (BS VI) emission standards. The Bharat stage emission standards are standards instituted by the government to regulate the output of air pollutants from motor vehicles. Eliminating older engines and mandating BS VI, according to experts, would be a big step in dealing with vehicular pollution because BS VI vehicles will be fitted with particulate matter filters in the exhaust pipes and will emit less sulphur.

– The government of India (GOI) has been trying to increase the use of electric vehicles in the country in order to reduce vehicles running on fossil fuels. GOI has declared a target of having at least 30 per cent of on-road vehicles as electric by 2030. It has been offering subsidies and incentives for encouraging e-mobility among people. Various states of India have started adopting electrification of their public and shared transports.

– GOI also launched the National Clean Air Porgramme (NCAP) in January under which it has identified 102 most polluted cities in the country to start implementing anti-pollution measures to reduce particulate pollution by 20 to 30 per cent by 2024.