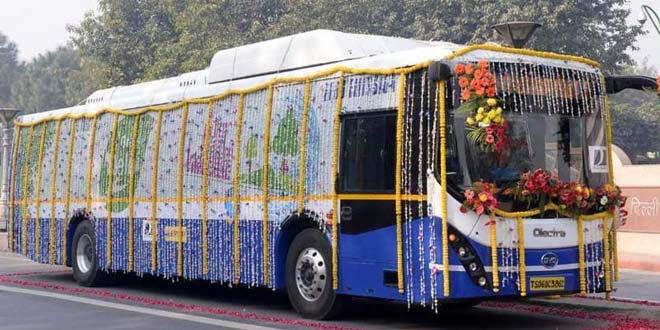 New Delhi: From drafting a policy for electric vehicle (EV), and earmarking Rs. 100 crore for EVs in its recently announced annual budget for 2019-20 to plying electric cars in urban local bodies for senior officials and installing public charging stations at areas like government offices, metro stations in Dwarka, market places such as Sarojini Nagar and others, Government of National Capital Territory of Delhi (GNCTD) has been undertaking initiatives to drive transition to electric mobility and fight air pollution caused by vehicular emissions. In a new decision, Delhi cabinet, chaired by Chief Minister Arvind Kejriwal, has taken these initiatives further by approving GNCTD’s proposal of deploying 1000 low floor electric buses to the national capital’s public transport fleet on Saturday (March 2). With this initiative, e-buses will soon become a common sight on roads of the national capital.

The Delhi government says that with this decision, Delhi has moved a step towards a greener and cleaner future. Kailash Gahlot, Transport Minister, GNTCD, acknowledged Delhi cabinet’s approval on his social media account and said,

Delhi cabinet’s nod to 1000 electric buses will ensure a cleaner and greener future of the capital.

Historic day for Delhi! Delhi Cabinet clears proposal of 1000 Low Floor Electric Buses – greater than commitment of all Indian cities put together. I thank Hon’ble CM @ArvindKejriwal Ji for his steadfast leadership in ensuring cleaner, greener future for the people of Delhi

According to Mr. Kejriwal, Delhi would become the first city in India to have such a large number of electric buses.

Delhi will become the first India city to have such a large no of electric buses. https://t.co/sbwbFYZ16C

The government of Delhi proposed the deployment of 1000 electric buses last year in May at an estimated cost of Rs. 2500 crore. After an interim approval of the deployment of electric buses, GNCTD started trial runs of three electric buses, at various routes in the city. Now as the trials are almost over and the cabinet has given its final approval, GNCTD is set to rollout tenders for e-buses. While the number of e-buses to roll out in the first phase for has not been finalised it is expected that the first set of buses are likely to hit the streets by the end of the current year, said a senior official from Delhi transport department.  The official said,

Delhi government is committed to providing an efficient and environment-friendly mode of public transport with sufficient capacity for the residents of the city and thus bring down the number of vehicles running on the road to reduce air pollution, and traffic congestion.

The buses are expected to have CCTV (Closed-circuit television) camera, Automatic Vehicle Tracking System (AVTS), panic buttons and panic alarms as security features. These buses will take two to three hours to fully charge and will be able to run for 150 km per full charge. These 1,000 low-floor electric buses will be parked and charged overnight at six depots called as parent depots, says a statement from Delhi government.

The cabinet has decided that subsidy and charging infrastructure will be funded through the utilisation of the Environment Compensation Charge (ECC) funds, presently a corpus of approximately Rs 1,100 crore, subject to directions and orders of the Supreme Court on this issue, the statement added. Before Delhi, the state government of states like Uttar Pradesh, Himachal Pradesh, Maharashtra, Karnataka, Kerela, and Tamil Nadu have also started deploying electric buses in their public transport fleet. This is being done in line with the central government’s mission of increasing’ adoption of electric mobility among people and of having at least 30 per cent of the total vehicle on road as electric by 2030.

Diesel Vehicles Are Responsible For 66 Per Cent Of Air Pollution-Related Deaths In India, Says A New Study

Best Of Kumbh 2019: Authorities Set A Guinness Record For ‘Most People Sweeping The Floor’ At The Mela