New Delhi: Amritsar, the spiritual and cultural center of the Sikh religion is home to their holiest place of worship – Harmandir Sahib, also known as the Golden Temple. People from across the world, irrespective of their religion, pay their obeisance here. Despite receiving over 120,000 devotees each day, totaling around five crore per year, the Golden Temple has sustained itself as a symbol of cleanliness. And all this is possible through the concept of ‘seva’ means selfless service.

Every day our faith teaches us about seva and we do so by keeping the surroundings clean”, said Avtar Singh Makkar, Former President, Shiromani Gurdwara Parbandhak Committee (SGPC).

Nearly every aspect of caring for the temple is managed voluntarily. On a daily basis, volunteers as part of seva participate in the cleaning activities like mopping the floors, cleaning the washrooms and safekeeping shoes of worshippers, washing dirty dishes in the kitchen and taking charge of the waste management as well, thereby keeping the temple absolutely clean and hygienic.

Keeping the temple premises clean is a joint effort. It is our responsibility to keep the temple clean, and it depends on one’s will whether to be a part of the service or not, said Gurleen, a student visiting the temple.

Gurleen voiced what is central to the cleanliness scenario – the Golden temple is kept clean, not just by well managed sanitation programme but most importantly on a collective ethos that gives dignity of labour to all the volunteers.

Notably, for many people, the cleaning activity forms an essential part of their daily life. Jatinder Kaur, a resident of Amritsar, comes for two hours every day to do her bit of seva by sweeping the carpet on which people walk inside the temple premises. With brooms in both her hands, she cleans every last bit of dirt, and has been doing this from the past 20 years.

However, despite its religious significance, as well as existing swachhta efforts by the local authorities, the area surrounding the Golden Temple, chosen as a Swachh Iconic Place (SIP) by Ministry of Drinking Water and Sanitation in year 2016, does not present the highest level of cleanliness. This is due to a number of key issues, which have not only impacted the experience of the locals and visitors alike, and, if not effectively addressed, has the potential to degrade the area’s ecosystem and the physical temple site in the long-term. Some of the issues are, for instance:

1). Stress on existing basic services: The basic services like waste collection and sanitation, which currently does exist in the surrounding communities and Galiara (outer corridor of Golden Temple) area, are inadequate and are easily overwhelmed by both large influx of visitors and long stays of large groups.

However, to address the issue of waste collection, the Municipal Corporation of Amritsar is working to install bio-compactors (machines to reduce the waste material into bio mass through compaction).

In addition to bio-impactors, the Corporation will also install smart semi-underground bins in the vicinity of Golden Temple. These smart bins, when filled with waste, send an auto message to officials, notifying them to collect the waste, said Sourabh Arora, Joint Commissioner, Municipal Corporation, Amritsar.

Also, a bio-methanisation plant will be installed to produce bio-gas from the wet waste generated at the world’s largest community kitchen at the Golden Temple, which feeds over a lakh visitor each day.

2). Distance to public conveniences: There are around 10 toilets at periphery of Galiara, and around 5000 people use the facility every hour. But the only inconvenience people face is that they are located slightly far from the main temple site, which makes it difficult to access and less likely to be used.

However, the washrooms at the Golden Temple are clean, given the grim state of public toilets elsewhere in the city or country for that matter.

A total of 24 staff members work in 8-hour shifts continuously day and night to ensure high hygiene standards of the toilets. To ensure that toilets are clean all the time, Jaspaal Singh, the supervisor of toilets managed by the Golden Temple, said that as per the protocol, toilets get cleaned up after every 15 minutes.

Of the 10 public toilets, eight are being maintained by Sulabh International on Pay and Use model and the remaining two are being managed by a United Kingdom based organisation named Fortal.

3). Space availability: As per SGPC and Municipal Corporation, the issues of limited free land and ground space, as well as ownership questions have undermined the installation of sanitation infrastructure and other amenities around the Temple. However, efforts are being made to address this issue.

4). Public education and enforcement: Following the kar sewa (voluntary contribution of physical labour towards cleaning) traditions, the SGPC and Municipal Corporation are partnering to raise awareness and encourage visitors and local communities to exercise personal and collective responsibility of the litter and contribute to keep the area clean. Enforcement measures are also proposed to complement and sustain public’s cleanliness efforts.

The Municipal Corporation also organised a Cleanathon on July 24. As part of this initiative, we installed a number of new litter bins for waste segregation – green dustbins are for disposing of wet waste while the blue ones are for dry waste, said Mr Arora. 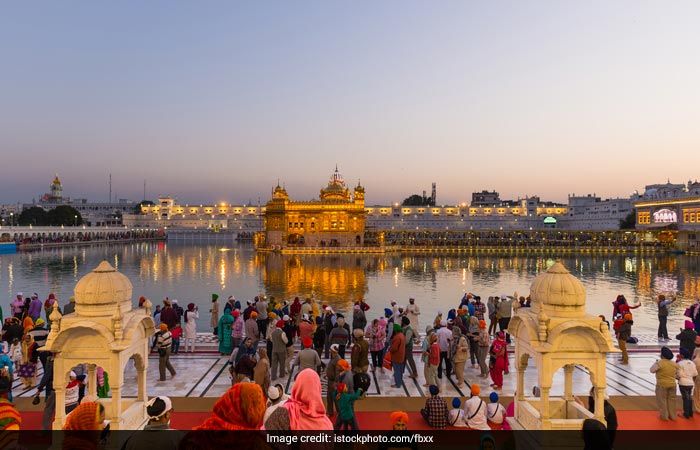 The Corporation is using a more holistic approach towards cleaning and efforts are working towards cleaning of all the 21 streets leading to the Golden Temple in a focused way, said Mr Arora.

Also Read: From Iconic To Swachh, India’s Landmarks To Lead The Way To Swachhta

The overarching objective of this plan is to bring the cleanliness standards of the Golden Temple and its surroundings up to a level that makes it a model “Swachh Tourist Destination”. The proposed action plan comprises:

1) Cleaning of public areas within the temple and its walls

5) Improvement of solid and liquid waste treatment facilities and services

The Golden Temple has been a symbol of cleanliness, spiritual and literal, for centuries. Its inclusion as a part of the Swachh Iconic Places programme reiterates its significance. With ongoing and proposed actions plans to cleanup the areas surrounding the temple, the Golden Temple is aiming to be a world class Swachh destination for devotees and tourist from around the globe.