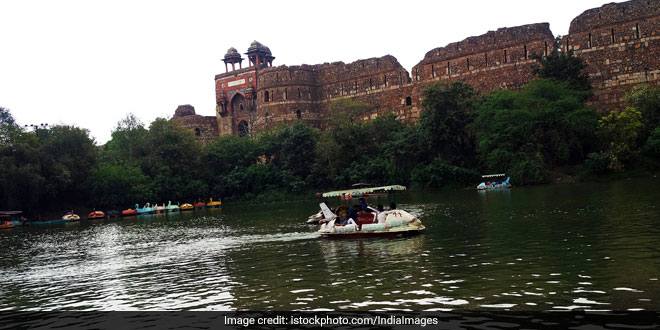 New Delhi: The National Green Tribunal has given its nod to the revival of the iconic Purana Qila lake here by laying impermeable plastic lining on its bed and has rejected the claim that the project was being undertaken in a manner which would damage the environment. A bench headed by NGT Chairperson Justice A K Goel said that there may be different opinions on the subject but once an informed decision has been taken on expert advice for the use of impermeable plastic lining, it is difficult for the tribunal to reject the view.

The green panel took note of the submission of the state-owned construction firm NBCC (National Buildings Construction Corporation) that development work of the iconic Purana Qila lake here was being done as per the suggestions of the IIT (Indian Institutes of Technology)-Roorkee and rainwater harvesting structures were being built for ground water recharge. The NBCC had said that drawings for development works at Purana Qila lake were approved by the Archaeological Survey of India (ASI) and it was directed to seek expert advice from a reputed institute such as IIT for laying of the ethylene propylene diene terpolymer (EPDM) membrane in the lake and send the same to ASI.

“The applicant in person states that the opinion of the IIT is not sound. Recharge of ground water has to be a priority. If there is any apprehension that the recycled water may not be convenient for the recharge, option of obtaining regular supply of treated water could be explored. There may be different opinions on the subject but once an informed decision has been taken on expert advice for the use of impermeable plastic lining which we find difficult to direct rejection of that opinion and acceptance of opinion of the applicant. Accordingly, this application is disposed of,” the bench said.
The NBCC had told the tribunal that IIT Roorkee report states that the benefits of maintaining a perennial source of surface water of good quality over an area of approximately seven acres outweigh minor concerns on groundwater recharge and rain water harvesting structures can be built within the area. The tribunal had earlier directed the NBCC to submit a report on the question whether plastic lining should be removed or whether alternative options for lake revival should be preferred. It was also asked to respond on the plea against chlorination of the water body.

The direction came on a plea filed by city-resident R K Gupta who contended that NBCC and the Archaeological Survey of India have put a plastic sheet on the bed of the lake, preventing groundwater recharge by both treated recycled water and rainwater. The plea said that the method of concretisation and laying down of the sheets will lead to damage to the lake.
“The ASI and NBCC should have noted that the Old Fort lake in its old form was unlined adding considerably to the groundwater recharge round the year in the area declared as critical by the Central Ground Water Board. By their act, the two agencies have eliminated recharge through the bed of the lake causing grave environmental damage. The project as conceived and being implemented has adverse impacts on the environment, contrary to the ecosystem of the lakes,” the plea said.
The petitioner sought directions to restore the lake to its natural condition by removing the impermeable plastic lining and explore alternative revival techniques for the water body. The NGT had earlier slammed the ASI over the poor condition of the lake and summoned its senior official to explain why it had not been cleaned despite its direction.