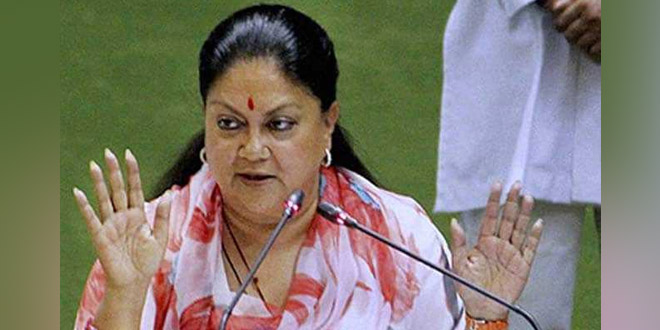 Jaipur: Rajasthan Chief Minister Vasundhara Raje inaugurated Dravyavati River Rejuvenation Project in Jaipur on Tuesday night. The project aims to reduce pollution, create green spaces and treat 170 million litres of sewerage water every day. The project, which has been executed by Tata Projects Limited, is spread across a 47.5-km-long rain fed riverfront. CM Raje visited the experience centre at Shipra Path where she unveiled the project. On the occasion, the CM said, “A dream project has come true for a new Jaipur.”

Dravyavati river was a source of water in the city in the past but with time, it turned into a sewage nallah. Tata Projects Limited officials said the river front project has jogging tracks along its banks. Further, the riverfront will reduce the threat of floods and create employment. The encroachments were removed from the Nallah which helped restore the river, said Vinayak Deshpande, Managing Director, Tata Projects Limited. He said 16-km of the riverfront has been completed and dedicated to the public while works for the rest are on.

More than 17,000 trees, shrubs, and ornamental plants have been planted along the banks of the river. A pathway and a cycling track of nearly 38 kilometre on both sides of the river has been provisioned. Three gardens have been developed at the Bird Park in Sikar Road, Landscape Park at Shipra Path, and at the Botanical Garden in Bambala covering around 1 lakh metre. Planned landscapes have been developed along the river totaling an impressive 5.0 lakh square metre.
The inaugurated area has free-to-use public Wi-Fi connections. The Landscape Park will have i-kosks that will provide information about the project, smart dustbins, and variable message signage. Dravyavati River Project is also equipped with public announcement systems that can be used in emergency situations in urban periphery of the city. To enjoy cycle rides, there is a green ride app as well. Public toilets at 45 locations around the course of the river shall also be constructed. For added security, CCTV cameras of high resolution have been installed with power backup systems and cabling at key locations.