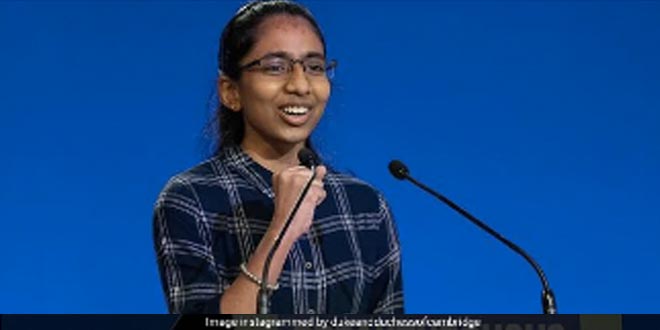 New Delhi: A 14-year-old girl from India, speaking at the COP26 in Glasgow, told the world that her generation is “angry and frustrated at world leaders who’ve made empty promises” and made a direct call to action to save the planet. One of the finalists of the Earthshot Prize, dubbed the “Eco Oscars”, Vinisha Umashankar was invited by Prince William to speak at a meeting discussing clean technology and innovation at the climate conference.

“Today I ask, with all due respect, that we stop talking and start doing. We, The Earthshot Prize Winners and Finalists, need you to back our innovations, projects and solutions, not an economy built on fossil fuels, smoke and pollution. We need to stop thinking about old debates because we need a new vision for a new future. So you need to invest your time, money and effort in us to shape our future!” the girl from Tamil Nadu told the world leaders.

Prime Minister Narendra Modi, his UK counterpart Boris Johnson, US President Joe Biden attended the event and watched on as the young Indian made a rousing speech.”On behalf of The Earthshot Prize Winners and Finalists, I invite you to join us. I invite you to stand with us. We hope that you will give up the old ways of thinking and the old habits. But let me be clear we! When we invite you to join us, we will lead even if you don’t. We will act even if you delay. And we’ll build the future, even if you are still stuck in the past. But please accept my invite and I assure you, you will not regret it,” she said.

Vinisha Umashankar’s solar-powered street ironing cart made the Earthshot Prize finalist cut for its concept of replacing dirty charcoal with clean energy from the sun. The young Indian underlined that when it comes to climate change, there’s no “STOP button”.

Many of my generation are angry and frustrated at leaders who’ve made empty promises and failed to deliver. And we have every reason to be angry. But I’ve no time for anger. I want to act. I’m not just a girl from India. I’m a girl from Earth and I’m proud to be so. I’m also a student, innovator, environmentalist and entrepreneur but most importantly, I’m an optimist, said Vinisha Umashankar.

Prince William’s Earthshot Prize is designed as a global search for the most inspiring and innovative solutions to the greatest environmental challenges facing the planet. It covers five areas: how to protect and restore nature; clean our air; revive our oceans; build a waste-free world; and fix our climate. Launched in October last year, it is inspired by US president John F Kennedy’s “Moonshot” project in the 1960s to put a man on the moon.