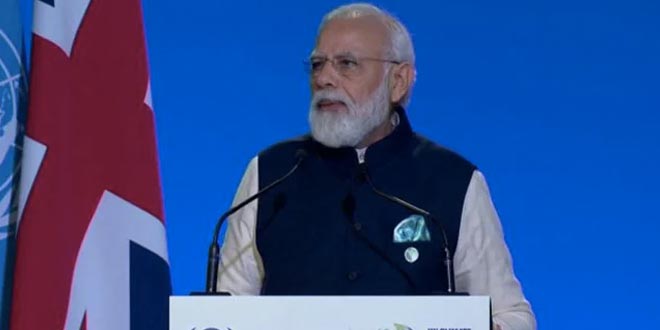 New Delhi: “By 2070, India will achieve the target of ‘net zero’,” announced Prime Minister Narendra Modi in his speech at Glasgow’s Scottish Exhibition Centre where he is attending the opening ceremony of the COP26 climate summit. PM Modi further added that more passengers than the entire population of the world travel by Indian Railways every year. This huge railway system has set itself a target of making itself ‘Net Zero’ by 2030. “This initiative alone will reduce emissions by 60 million tonnes per annum,” he added. In his speech, the Prime Minister also listed how the Indian government’s projects like Har Ghar Jal, Swachh Bharat Abhiyan and Ujjwala Scheme have not only provided adaptation benefits to the Indians in need but also improved their quality of life.

Here are the major takeaways from PM Modi's speech at COP26:

PM Modi also asserted on increasing the Climate Finance to $1 Trillion from the previously committed but never delivered $1 billion, and added that the promises made regarding climate finance had proven to be hollow until now. He said,

India expects developed nations to make climate finance of $1 trillion available at the earliest. Today it’s important to track climate finance just like we track the progress of climate mitigation. While we are all raising our climate action goals, the world’s ambitions on climate finance cannot remain the same as they were at the time of the Paris Agreement. The entire world admits that India is the only major economy which has delivered on the Paris agreements in letter and spirit.

Prior to the address, PM Modi met his British counterpart Boris Johnson on the sidelines of the COP26 climate summit and discussed ways to enhance bilateral cooperation in areas like green hydrogen, renewables and clean technology, economy and defence.

The interaction, soon after the opening ceremony of the World Leaders’ Summit at COP26, was scheduled to focus on the UK-India climate partnership as well as a review of the 2030 Roadmap for stronger UK-India strategic ties signed by the two leaders during a virtual summit in May this year.

Prime Minister Modi congratulated PM Johnson for successfully organising the COP26 and for his personal leadership in championing global action for climate change mitigation and adaptation. He reiterated India’s commitment to closely work with the UK on climate finance, technology, innovation and adaptation green hydrogen, renewables and clean technologies including joint initiatives under the International Solar Alliance (ISA) and the Coalition for Disaster Resilient Infrastructure (CDRI), the Ministry of External Affairs said in a press release.

Also Read: India’s Agenda At COP26: What You Need To Know