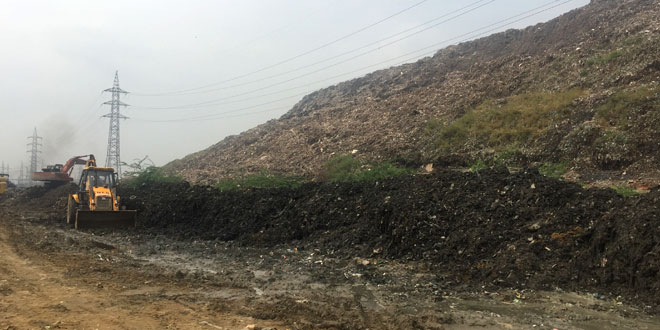 The statement also said that work at all the three sites would be carried out under the guidance of experts to take care of any contingencies and long-term effects.

In the meeting, Professor Manoj Datta of IIT explained measures for improvement of stability of the garbage mounds such as flattening the slope and removing leachate (liquid that drains or ‘leaches’ from a landfill) and gas. Case studies from Gorai (Maharashtra), Vapi (Gujarat) and Hyderabad (Telangana) were demonstrated.

The issues of emissions control and need for elimination of fires was also deliberated. It was apprised to the Lieutenant Governor that a 5-layer impervious cover/cap could be provided besides removal of leachate and gas through drains and wells. Fires can be eliminated by collecting and flaring inflammable methane, the statement said.

Regarding the aesthetics of the landfill sites, it was suggested that the garbage slopes could be re-graded and green vegetative growth engineered.

The normal time-frame to implement such measures, which are also quite expensive, range from 9 months to 18 months, depending upon site conditions and clearances.

The Delhi Jal Board CEO talked about possible solutions for efficient forms of disposal of silt such as stocking it in geo-tubes and de-watering it along the banks of the existing major drains.

The Lieutenant Governor directed him to consult with NEERI (National Environmental Engineering Research Institute) and other experts on this front and come up with firm proposals.

Earlier this week, Lieutenant Governor Baijal had directed municipal corporations to increase the capacity of their existing waste-to-energy plants and clear the garbage at Ghazipur landfill site within two years beginning November.

The direction had come after a portion of the waste dump, estimated to be as high as a 15-storey building, collapsed on September 1, killing two persons.