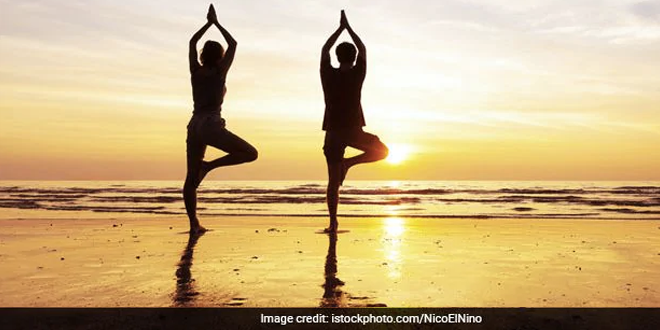 New Delhi: June 21 is celebrated as International Day of Yoga (IDY) across the globe since 2015, following its inception in the United Nations General Assembly in 2014, as the UN noted the numerous benefits of practising yoga regularly. Tracing its origin to India, Yoga is an ancient ascetic practice that combines physical, mental and spiritual pursuits to achieve harmony of the body and mind. June 21 was picked as the date to celebrate Yoga Day as per Prime Minister Narendra Modi’s suggestion at the UN, explaining that it is the longest day of the year.

Yoga is an invaluable gift of India’s ancient tradition. It embodies unity of mind and body; thought and action; restraint and fulfillment; harmony between man and nature; a holistic approach to health and well-being. It is not about exercise but to discover a sense of oneness with yourself, the world and nature. Changing our lifestyle and creating consciousness, it can help in well-being. Let us work towards adopting an International Yoga Day, PM Modi said at the UN General Assembly in 2014.

This year’s theme for IYD is ‘Yoga for Humanity’ and it focuses on how yoga helps achieve holistic health of every individual. The theme also appropriately portrays how yoga served humanity in alleviating suffering during the peak of the pandemic. Prime Minister Narendra Modi announced the theme in his “Maan Ki Baat’ broadcast.

We are living in a time when the COVID-19 pandemic continues to upend the lives and livelihoods of people worldwide. COVID-19 has exacerbated psychological suffering and mental health problems like depression and anxiety, as well as a serious immediate impact on one’s physical health. People across the globe have embraced Yoga to stay healthy and rejuvenated and to fight the social isolation and depression that was widespread during the pandemic. Yoga has also been playing a significant role in the psycho-social care and rehabilitation of COVID-19 patients in quarantine and isolation particularly very helpful in allaying their fears and anxiety, as per the Ministry of Ayush.

Prime Minister Narendra Modi will lead a mass Yoga event at the Mysuru Palace grounds in Karnataka to celebrate the International Day of Yoga. PM Modi will join 15,000 yoga enthusiasts who will participate in the event. The programme is being held in physical mode after a gap of two years due to the coronavirus pandemic.

Union Ayush Minister Sarbananda Sonowal said that a flagship programme in coordination with the Ministry of External Affairs is being organised for a mass Yoga Protocol world over on IDY 2022 following the movement of the Sun.

The programme will commence at 3 AM IST and would continue till 10 PM. Starting in Fiji, Brisbane, Australia and New Zealand, it will end in San Francisco, USA and Toronto, Canada, he said. Seventy-nine Countries and United Nations’ organisations are onboard for the programme with full-hearted support of Indian missions abroad. The programme will be telecast live on DD India for 16 time zones, Mr Sonowal said.

The minister said that mass Common Yoga Protocol (CYP) demonstrations will be conducted at 75 iconic locations branding/showcasing India through IDY activities. This programme would be part of ‘Azadi Ka Amrit Mahotsav’.

The programme will include a digital exhibition in Dasara Ground, Mysuru on June 21 and 22 to showcase a ‘state of the art’ development in Yoga.

An interactive feature of doing Yoga with PM is also provided, wherein anyone can perform virtually Yoga with animated videos of PM and can take virtual selfie with the PM. In addition, through an interactive tool the concentration level of an individual can be checked. Further, a static exhibition covering all Ayush streams and Yoga start-up is also organised, the minister said.

The Ministry of Ayush in coordination with different Yoga organisations is holding CYP demonstrations at over 100 places in Delhi in sync with the main event led by Prime Minister, Sarbananda Sonowal said. The Ayush ministry is also employing digital and other platforms created for this purpose. Yoga portal and Namaste app are being used for registration of participants, organisations, and Yoga Certification Board (YCB) portal for issue of certificate after completion of trainer course, Mr Sonowal said.

In addition, ‘Bhuvan app’, developed with the help of ISRO, would be used for reporting of mass participation, he said.
About 1.5 lakh CSCs and 200 community radios are engaged to spread the Yoga awareness to the grassroot level, including remote villages, and “aspirational and backward districts” of the country, the minister said.

International Yoga Day: WHO Regional Director Highlights That Yoga Is For All Since It Has Helped Millions Of People Globally

Monkeypox Explained: From Symptoms To Risk Factors, Here’s Everything You Need To Know