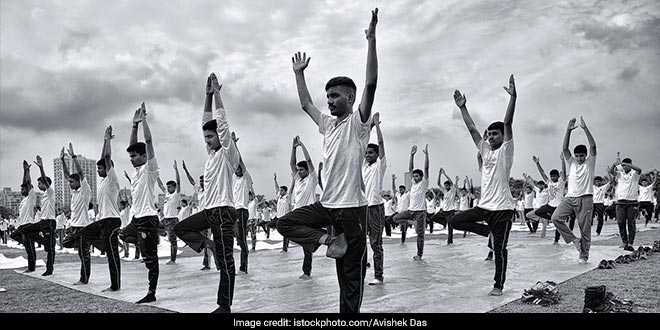 The Ministry of Ayush had chosen "Yoga for Humanity" as the theme of the eighth International Day of Yoga, which will be organised in India and across the globe on June 21

New Delhi: Ahead of the eighth International Day of Yoga which will be celebrated on June 21, Prime Minister Narendra Modi on Monday (June 13) said that yoga has gained tremendous popularity globally. The Prime Minister also said that people from different walks of life including leaders, CEOs, sportspersons and actors regularly practice yoga and talk about how it has helped them. Taking to Twitter, he shared a video highlighting various details and benefits of yoga. The video begins with PM Modi’s speech at the United Nations General Assembly in 2014. A clip of Sushma Swaraj and Shripad Naik is also included in the video, which later highlights various different kinds of yoga and its postures.

In the last few years, yoga has gained tremendous popularity globally. People from different walks of life including leaders, CEOs, sportspersons and actors regularly practice yoga and talk about how it has helped them, PM Modi tweeted along with the video.

Earlier on Sunday, the Prime Minister urged everyone to make yoga a part of their daily routine stating that it has countless benefits.

On the International Day of Yoga, Prime Minister Narendra Modi will perform yoga at Mysore Palace in Karnataka, while 75 ministers from his cabinet will do yoga at 75 historical and cultural sites in the country.

The International Yoga Day celebrations are being held in a big way at 75 prominent heritage spots in the country.

The Ministry of Ayush had chosen “Yoga for Humanity” as the theme of the eighth International Day of Yoga (IDY) to be organized in India and across the globe on June 21.

Focusing on Yoga for Humanity, special programmes have been designed this year for specially-abled people, the transgender population, women and children. Human values that are an integral part of yoga education in schools are also in focus.

The main event of the International Day of Yoga 2022 demonstration will be held at Mysore, Karnataka.

The 8th edition of International Day of Yoga will see many firsts, one of them is an innovative programme named “Guardian Ring”, which will showcase the movement of the sun, participation of people performing yoga will take place along with the movement of the sun from different countries, beginning from the east and marching towards west.

The 8th edition of International Day of Yoga is being promoted through multiple programmes by the Ministry of Ayush, in association with Morarji Desai National Institute of Yoga.

Watch:Five Yoga Asanas That Can Help In Post COVID Recovery