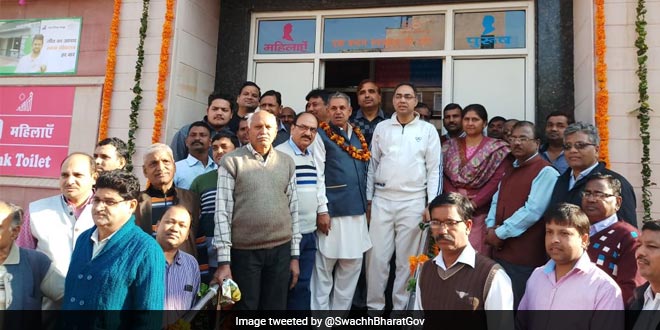 New Delhi: Checks and inspections without prior notices often yield unpleasant results. But for Jaipur, a surprise check by the Quality Council of India (QCI) on the city’s sanitation status resulted in official declaration of the city as open defecation free (ODF). The seven-month long wait for official ODF declaration was little more than what the Jaipur Nagar Nigam had expected, but the ODF declaration of the city’s 91 wards by QCI has brought a sigh of relief for the civic body. Jaipur Municipal Corporation (JMC) had declared the city ODF in February 2018, and was awaiting final recognition from QCI.

Public and individual household sanitation was not Jaipur’s greatest strengths, as was reflected in the city being ranked 215 out of 434 cities in Swachh Survekshan 2017. But in the past one year, Jaipur’s civic body has worked towards turning the tables, and focused on construction of individual and public toilets within the city’s premises. The civic body began identifying areas with poor sanitation coverage. Kachhi Basti, a large urban slum area in the city became the center of focus of JMC, as toilet coverage in the area was woefully poor. 500 community toilets have been set up in Kachhi Basti alone since last year.

The ODF recognition is a huge success for us and we have been personally congratulated by Mayor Ashok Lahoti. Even a few years back, it was unimaginable that a slum area that Kachhi Basti would become ODF. But thanks to the efforts of all municipal officers, councillors and local people, there are more than 500 copmmunity toilets in Kachhi Basti today, and the area has become cleaner with proper access to safe sanitation facilities, said Har Sahay Meena, Additional Municipal Commissioner, Jaipur.

Apart from ensuring that the city’s biggest slum area becomes ODF, Jaipur’s civic body also worked towards installing 50 e-toilets (programmed to flush 1.5 litres of water after three minutes of usage) across the city, renovated 36 existing public toilets and constructed over 200 more new public toilets within a span of three years. Over 18,000 individual household toilets have been constructed in Jaipur, bridging a huge gap in individuals’ access to safe sanitation. The city civic body feels that this has been the major contributor towards Jaipur becoming ODF.

“Though public and community toilets are important for any city’s cleanliness, access to household toilets is still the best method to ensure that people do not defecate in the open. More than 18,000 household toilets have been constructed in Jaipur in the last four years, and people have been using them regularly to keep the city clean,” said Mr Meena.

Jaipur’s commitment towards improving its sanitation and cleanliness scenario was evident from the city’s performance in Swachh Survekshan 2018, where it climbed up to the rank of 40 from previous year’s 215. If the Swachh Survekshan 2018 result boosted Jaipur’s confidence, the ODF status has further cemented that, and the civic body officials are ecstatic by the success of the work done by them. Jaipur is now aiming to further strengthen its waste management system to go for the ODF plus status.