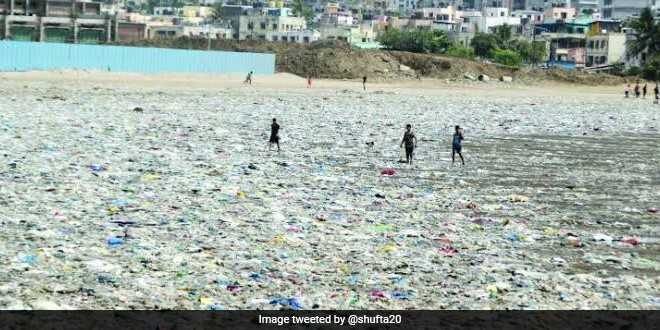 New Delhi: The famous tourist spot in Mumbai – Juhu beach is in the news as it has turned into one big garbage dump, thanks to the ongoing monsoon in the city. The pictures of the beach filled with all things plastic and garbage is making the rounds on social media, highlighting the shocking state of waste management everywhere. This is not the first time this has happened, last month, during high tides, tonnes of garbage, mostly plastic waste were thrown out from the sea along the shores, making it extremely unpleasant sight accompanied with unbearable stink. Many citizens, even celebrities came together at that time to vent their anger at the gross negligence and lack of awareness among citizens about the proper disposal of their garbage.

This time as well, citizens have come forward to showcase the grim plight of the Juhu beach. Some are calling it nature’s tit for tat while some are urging everyone to stop polluting the beaches and join in the clean-up drives whenever possible.

Here are some of the reactions:

What you throw into the sea comes back to you.
View of Juhu Beach Today Morning @mybmc @mybmc pic.twitter.com/GcLwJeQo27

⁦@Dev_Fadnavis⁩ the bmc is doing a good job of cleaning Juhu beach last two years. How about some preventive action now ? pic.twitter.com/BYziGSMJB4

Stand-up comedian and YouTube personality Atul Khatri also posted a video review to express his concerns about the garbage crisis on Juhu beach. He said,

This is India’s famous Juhu Beach, which is covered sadly in plastic waste. This is the reality of Mumbai, where we have some of the richest of people staying and on the other hand there is this dirty and filthy beach. What we see here is basically the result of our activities – in our homes, we don’t segregate our waste, thinking the Brihanmumbai Municipal Corporation will do it, but the truth is, that never happens.

Atul Khatri also pointed out that the garbage being thrown out by the sea during the rainy season is the same garbage that has been dumped into it for the rest of the year by us. He also elaborated on how the scientific cycle of cloud formation, which eventually brings rain, is being affected by the waste and plastic, he adds,

There is so much plastic in the sea that even the scientific cycles are failing, how will any evaporation take place in the presence of the non-biodegradable substance like plastic waste.

In 2018, Mumbai based photographer Ganesh Venare and Aishwarya Sharma, a medical student also tried to showcase the grim reality of the city’s famous beach through a photo series. They recreated the famous ‘#FollowMeTo’ Instagram pose that was started by the Moscow-based photographer Murad Osmann and his wife Natalia Zakharova , where the couple posted incredible hand-in-hand photos as they travelled across the globe. Ganesh Vanare and Aishwarya Sharma saw huge piles of garbage at the Juhu beach, they were so shocked that they immediately decided to strike a pose for their Instagram post recreating the famous #FollowMe style. The minute the photo was shared on Ganesh and Aishwarya’s social media account it went viral.

Also Read: In A Bid To Make Juhu Swachh, Sonakshi Sinha Urges Fans To Participate In The Cleanup Activities

One year later, when Juhu beach is again making headlines for its garbage crisis, this same photo has taken the internet by storm. People are sharing the disheartening picture and asking for immediate action to stop garbage from killing our seas and the life in it.