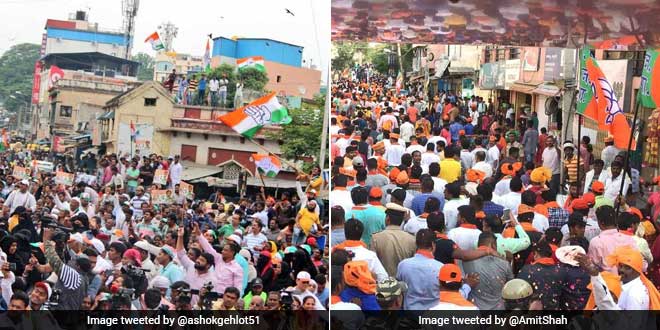 New Delhi: Even in the earliest of mornings, crowd is a common sight in slums of Doddigunta, Cox Town, Bengaluru. The slum area, home to around 4,000 residents has become habituated to early morning crowds, standing in queue not for food or ration, but to access one of the four public toilets in the area. Bengaluru may be known as India’s IT capital to the world, but for residents of the city’s slums, their daily struggles to access safe sanitation is what defines Bengaluru for them. Sanitation in Bengaluru has become a major issue in the Karnataka Assembly Elections 2018, as all major political parties have promised better sanitation facilities in the capital city, if voted to power.

A December 2017 survey by the city based NGO Janagraha declared that Bengaluru’s public sanitation system was in a poor shape, as the city had a shortfall of nearly 1,100 toilets. Worse, the survey gave toilets maintained by Bengaluru’s civic body an average score of 5.9 out of 10, as nearly all the 150 toilet complexes maintained by BBMP lacked cleanliness and running water. The city has a total of 473 public toilets, far lesser than the number required.

Bengaluru was a planned city and till mid-1980s, it was much cleaner and less congested than what it is today. The IT boom saw migrations on a large scale and the growth of public amenities has not been at par with the city’s population growth. This has resulted in civic amenities being disproportionately developed across the city, and hence people have to struggle for services like sanitation, said Dr Nandini Nagarajan, Professor of Environmental Science, Bangalore University

The dire situation of sanitation in Bengaluru has united many of the city’s residents, who have come out in the open and asked for sanitation to be prioritised in this year’s elections. In April 2018, The Citizens Collective of Bengaluru submitted a petition to BBMP, demanding better and more public toilets, and revamping of the existing ones. With voting just a day away on May 12, promises of better sanitation are flooding Bengaluru from all political parties, and residents are being more vocal about voting only if there is improvement in the city’s sanitation scenario.

The state has been insufficiently providing funds for construction of toilets, which has hampered toilet construction. We commit building over 2,000 toilets if we are victorious and each of the 28 wards in the city will have She Toilets, to be used only by women. The city’s sanitation scenario will change in the coming five years, said S. Raghu, BJP candidate and incumbent MLA from C.V. Raman Nagar, Bengaluru.

The ill-maintenance of existing toilets has irked the residents of Bengaluru, more than the lack of adequate number of toilets. The Janaagraha survey took stock of over 50 toilets in the city and rounded up a user satisfaction score of less than 4 (out of 10), as people complained that most public toilets had broken seats, no running water and did not remain open throughout the day. In constituencies represented by BJP, Congress and Janata Dal (Secular) MLAs, the public toilet scenario was similar across all areas.

We have plans to develop Bengaluru into a city where public sanitation is no longer a problem. We will hold due consultation with BBMP, identify lands to build public toilets and revamp existing ones. Our first steps towards improving public sanitation in Bengaluru will be the repairing of dilapidated toilets so that more people can use them, said R. Sampath Raj, Congress Candidate from C.V Raman Nagar, Bengaluru.

Bengaluru’s performance in toilet construction in the last two years has been poor, so much so that the city slipped to a low rank of 210 in 2017’s Swachh Survekshan, from 32 in 2016. Only 40 toilets have been built in the past two years, and at least 1,000 more need to be built for the city to go open defecation free.

In several areas in the city such as Rajajinagar, Jayanagar, Krishnarajapuram, public toilet construction has become a major election point. Political parties have understood that lack of proper sanitation facilities has irked the voters and promises of more and better toilets may get them more votes. Sapna Karim, Coordinator of Civic Participation in Janaagraha thinks that such focus on sanitation right before the elections is a good thing, but whether the promises will be upheld or not remains questionable.

While the focus on sanitation this time is more than what it has been earlier, due to the Swachh Bharat Abhiyan, legislators from all major parties in Bengaluru have not been able to do much to improve the city’s sanitation scenario. The rhetoric around sanitation has been quite strong in the run up to this year’s elections and we can only hope that whoever wins, promises of a Bengaluru with better and safer sanitation options are upheld,” says Ms Karim.

When the Swachh Survekshan 2017 rankings were released, Bengaluru’s shocking rank of 210 was not a big surprise for many of its residents. Sharada Kudle, a resident of Bengaluru and member of the NGO Citizengage, said that waste management has been erratic in the city. The city generates more than 4,000 tonnes of garbage daily, but manages to recycle no more than 1,000 to 1,200 tonnes, despite having seven recycle plants within the city premises. Tiny heaps of waste are visible in many spots in the city, as waste collection remains erratic.

The problem with waste in Bengaluru is that the problem lies in collection. Till last year, all the waste collectors were employed by contractors who would not pay them on time, would not supply them with adequate gear needed to collect waste and pay them meagre wages, sometimes as low as Rs 20 per hour. The city witnessed strikes by waste collectors on at least five occasions in 2017 alone, and many workers still prefer to work as daily wage labourers, rather than waste collectors, said Ms Kulde.

The BBMP took over waste collection in Bengaluru and though it now directly employs waste workers, conflict between the civic body and waste workers still remain. Waste workers say that due to erratic supply of gear and waste transport vehicles, many are reluctant to engage in waste collection. And though the BBMP has come up with measures like spreading awareness on waste segregation to reduce the daily wwaste generation in the city, they have not had much effect, as Bengaluru’s daily waste generation is expected to touch 13,000 tonnes in 2031. With regard to the upcoming Assembly Elections, S. Muthyala, President of BBMP Contract Pourakarmika Association says that promising better lives for Bengaluru’s waste workers should be a primary agenda for the party that wins the elections, as well-equipped waste workers will pave way towards a cleaner and healthier Bengaluru.

The past one year has seen repeated strikes because our demands were not met, and we kept functioning in unsafe conditions. All political parties contesting elections this year have promised better waste management in the city, and improved work conditions for us. We hope that whoever wins, we are provided with better gear and waste transport vehicles so that the city remains clean, said Mr Muthyala

Promise of a ‘waste-free’ or ‘zero waste’ Bengaluru has found its place in the manifestos of BJP, Congress and JD(S), the major political parties in Karnataka elections. BJP released a manifesto exclusively focusing on Bengaluru’s issues, and promised a waste free Bengaluru. With 28 out of 223 seats, Karnataka’s capital city may not be the make or break district that decides who forms the next government in the state, but cleaning up India’s IT capital seems to be the a battle of electoral prestige all political stakeholders want to win.

Also Read: Karnataka Elections: In The Run Up To Assembly Elections 2018, Promises Of A ‘Swachh Karnataka’ Find A Place In Party Manifestos

A City Rife With Water Problems

For Bangaloreans, waking up to the news of Bengaluru being the world’s second most likeliest city to run out of drinking water, was a rude shock. The BBC report, compiled after the water crisis in South Africa’s Cape Town came to limelight and put Bengaluru at the risk of running out of drinking water. The city’s rapid urbanisation has affected its water resources badly, and for years, its growing population has utilised its water resources, which has now started to show its effects.

Bengaluru’s water resources are stressed out, and unplanned migration and construction has worsened the water crisis in the city. The city’s lakes are encroached upon and sewage flows from factories into its lakes, thereby making the water unfit for consumption or usage. The fact that 80 of 189 lakes in Bengaluru are unfit for use puts the city at big risk in terms of drinking water,” said Professor T.V. Ramachandra of Indian institute of Science, who has worked on preservation of Bengaluru lakes since 2010.

Severe pollution in lakes like Bellandur and Varthur (more than seven instances of toxic froth emerging from these lakes was reported in 2017 alone), have made their water unfit for consumption. Increased dependency on water tankers has made water an expensive commodity. In the run up to Assembly Elections 2018, improving Bengaluru’s water crisis has become an agenda for all major political parties. The Congress in its manifesto promises that water from the Cauvery will be supplied to the city and over 180 lakes in the city will be rejuvenated in the next five years. The BJP makes a similar promise in its manifesto, of setting up a fund worth Rs 2,500 crore to clean Bengaluru’s lakes and reduce the prominence of water tankers in the city. Both Congress and BJP have also traded blows during the campaign, blaming each other for Bengaluru’s current water crisis. While BJP MLA candidate from Bengaluru’s Shanti Nagar Vasudev Murthy said that the water crisis has worsened during the current government’s rule due to their inability to clean up lakes and control the ‘tanker mafia,’ while Roshain Baig, Congress MLA candidate from the same constituency said that his party had undone years of pending work to restore normalcy in the city’s water supply system.

Do the promises of better water supply in Bengaluru hold real value or are merely empty electoral promises?

“It is true that not much work has been done to improve the city’s water supply and water pollution problems in the past five years. But for any party to claim that they will completely solve Bengaluru’s water problems in the next five years is too ambitious. The city needs its lakes to be rejuvenated, water from Cauvery to reach the reservoirs and a complete overhaul of the sewage disposal system. Completing all these in just five years is a tough task and Bangaloreans should differentiate between tall claims and properly laid out plans before they vote,” said Prof. Ramachandra.

Clean Ganga Fund Utilisation May Go Up To 70 Per Cent Of Total Allocation This Fiscal, Says Nitin Gadkari