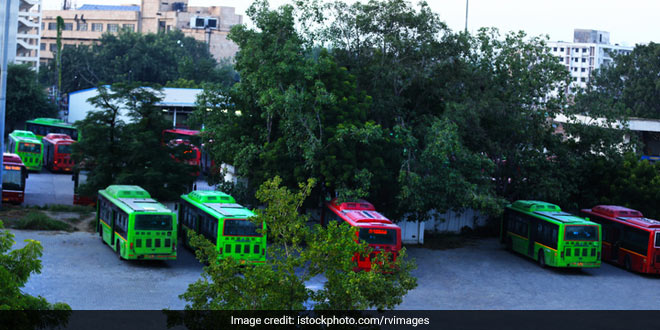 The Arvind Kejriwal government informed a bench of Justices Madan B Lokur and Deepak Gupta that Delhi transport minister has directed the utilisation of ECC for the people’s benefit by spending it on environmental projects, including the purchase of 960 semi-low floor fully electric buses.

You (EPCA) look into it as to whether it is good or not, the bench said and asked the EPCA to file its report. The counsel for the Delhi government said the proposal was pending for approval of the Cabinet, which was scheduled to meet at the end of this month.

In its response filed in the court, the Delhi government said advocate Aparajita Singh, who is assisting the court, as an amicus curiae, had told the court that Rs 1,301.36 crore was deposited as on March 26 this year under the ECC, but the amount remitted by the South Delhi Municipal Corporation to the transport department was about Rs 999.25 crore as on April 12 this year.

As per direction of the Minister (Transport), Delhi government, ECC fund is to be used for the project, which is induction of 1,000 semi-low floor fully electric buses in Delhi to mitigate the pollution level in Delhi, it said.

The Delhi government also said the Centre has introduced a new scheme where subsidy and loans were being given under ‘Fame Project’ where 11 cities, including Delhi, have been shortlisted for introduction of multi-modal electronic mobility.

It said Delhi has been awarded financial assistance of 40 fully electric buses to the tune of Rs 40 crore under the scheme. It said the cost of each such electric bus was around Rs 2.5 crore and the Delhi transport minister has directed that majority funding for this project would be provided by private concessionaires, to be selected through a competitive bidding process.

It said the transport department has also supported the induction of 905 electric feeder vehicles by Delhi Metro Rail Corporation (DMRC) to boost the “last mile connectivity” from metro stations and funds from the ECC would be used for this. It said part of funds from the ECC would also be used for upgrading the existing infrastructue of inter-state bus terminus here.

The Delhi government has told the top court that these decisions were aimed at combating the problem of air pollution and also for benefit of people using public transport here.

The amicus had earlier told the court that Rs 1,301 crore amount was collected in Delhi under the ECC, which the apex court had imposed on commercial vehicles entering Delhi in addition to the toll tax, and another Rs 70.5 crore was collected and lying with the Central Pollution Control Board under the one per cent cess levied on diesel vehicles having engine capacity of more than 2,000 cc.

The issue had cropped up when the court was hearing a PIL filed in 1985 by environmentalist M C Mehta who had raised the issue of air pollution in the Delhi-National Capital Region.

Karnataka Elections 2018: The Battle For Bengaluru Heats Up With Promises Of Cleaner Public Toilets, Better Waste Management And A Solution For Water Crisis

In A Plastic Collection Drive, Residents Of Pune Deposit Over 7860 Kg of Plastic Waste In Just 3 Hours