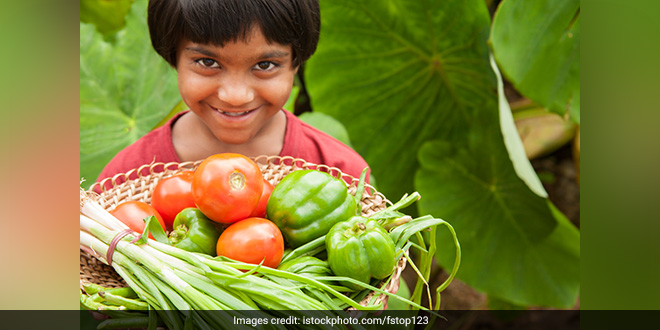 “POSHAN Anthem will surely strike a chord with every individual and strengthen the resolve of Malnutrition-free India,” asserted the Union Minister of Women & Child Development, Smriti Irani at the launch of the POSHAN Anthem on Twitter. The anthem, composed by Prasoon Joshi and Shankar Mahadevan, was launched by the Vice President Venkaiah Naidu on December 3 (Tuesday), with the aim to inspire people to join the movement to fight the scourge of malnutrition.

Grateful thanks to Hon’ble Vice-President @MVenkaiahNaidu Ji for launching the POSHAN Anthem ‘पोषणम्’. Conceptualised by @prasoonjoshi_ & composed by @Shankar_Live, POSHAN Anthem will surely strike a chord with every individual & strengthen the resolve of Malnutrition-free India. pic.twitter.com/wATHOyE5d0

(Translated: The country is filled with hope, let’s nourish them. India’s future is glimpsing from the womb, feed them and make their childhood healthy.)

The song with such easy words and tune can also be sung by all and will inspire citizens to take up the eradication of malnutrition in the country, as a mission. It covers issues of women and children like anaemia and also embodies the aspirations of young Indians. There are references to water and cleanliness that will inspire Indians to join in the movement for Swachh, Swasth and Shrestha Bharat.

The spokesperson also stated that the POSHAN Anthem is a part of their Information, Education and Communication (IEC) activities, where they wanted to sustain and intensify the initiative as a ‘Jan Andolan’.

Ministry of Women and Child Development is eager to using innovative tools like this, to take the message of nutrition to all citizens of India. We are also planning to get the song translated and recorded in as many regional languages as possible, so that it becomes a song of the people and the movement becomes a People’s Movement (Jan Andolan).

NDTV also spoke to an official from the Ministry of Women and Child Development, who emphasized that every legislator, administrator, civil society activist and citizen must ensure that all children have access to nutritious food.

More than 1.3 million Anganwadi workers are the nutrition warriors and change agents who are at the forefront of the battle against malnutrition. We have released this anthem with the hope that it will help increase the visibility of the Abhiyaan and also generate awareness among citizens on nutrition. We want this POSHAN Abhiyan to start a nutrition revolution to transform India in to a malnutrition-free country by 2022.

The Union Minister for Women and Child Welfare, Ms. Irani on Friday (November 22) had said that only 9 per cent of the children in the country get proper nutritious food. Speaking during the question hour session in the Lok Sabha, Ms. Irani,

Quality of food is more important than quantity. It is an illusion that malnourishment is only limited to poor families or tribal areas. It is present across the country.

She further said that even the rich and affluent families are not providing children with nutritious food. Something that is reflected in NITI Aayog data that only 9 per cent of the population is getting the right kind of nourishing food, she said.

Furthermore, the recently published Global Hunger Index (GHI) 2019 as well as UNICEF’s State of the World’s Children (SOTWC) reports highlighted the same point – India’s malnutrition issue. While GHI, a report that comprehensively tracks and measures hunger across the world, has ranked India 102 out of the qualifying 117 assessed countries. State of the World’s Children, on the other hand, has taken the Comprehensive Nutritional Survey into account to conclude that malnutrition is behind 63 per cent of deaths of children below the age of five in India. CNNS was conducted between 2016-2018 across India by UNICEF India and Ministry of Health and Family Welfare.

The Prime Minister’s Overarching Scheme for Holistic Nourishment or POSHAN Abhiyaan is India’s flagship programme to improve nutritional status for children, pregnant women and lactating mothers – through the use of technology, a targeted approach and convergence among stakeholders. The Scheme is attempting to reduce the level of stunting, under-nutrition, anaemia and low birth weight in children and is also focussing on adolescent girls, pregnant women and lactating mothers, thereby addressing malnutrition holistically.