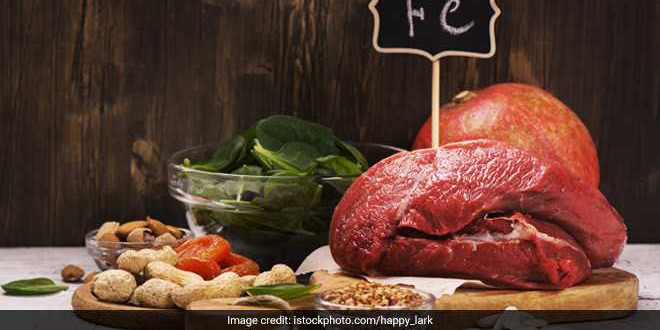 New Delhi: If you have been witnessing continuous fatigue, exhaustion, inability to sleep, hair fall, or if you have been looking pale (pull your lower eyelid down and check if it is pale or yellow in colour), or get tired easily even after a regular walk or climbing a fleet of stairs, there are high chances that you are suffering from iron deficiency anaemia. In simpler terms, anaemia is the reduced oxygen carrying capacity due to less Haemoglobin (Hb) available in the body. The root cause of anaemia is the lack of vital nutrients, especially iron.

Since iron is essential in carrying oxygen to different parts of the body, which in turn is necessary for energy needs, iron deficiency anemia can have serious implications. People with iron deficiency can suffer from poor immunity status and in severe levels, can lead to even heart failure. The difficulty of this condition is much more heightened during pregnancy, when there is an increased demand for iron. In the prenatal period (time between conception and birth), iron deficiency can lead to difficulty in breathing, fainting, tiredness, palpitations, and sleep difficulties. During pregnancy, it can lead to premature labor, intrauterine growth retardation, low birth weight, birth asphyxia, and neonatal anemia, among others, says Dr Giridhara R Babu, Professor, Head Lifecourse Epidemiology, PHFI, Bangalore.

Also Read: 5 Signs And Symptoms To Look Out For Iron Deficiency

To meet the challenge of high prevalence of iron deficiency anaemia, the government provides iron and folic acid (IFA) which according to Soumya Swaminathan, Deputy Director-General Of Programmes, World Health Organisation (WHO) lead to a very little reduction in the percentage of pregnant women or children who are anameic. Though IFA supplements are one of the options, there are some nutritious, iron packed foods, which can help you eliminate both iron deficiency and anaemia.

Whenever you are taking iron supplements or iron rich food, pair it with something citrus which is high in Vitamin C because it increases the absorption of iron, suggests Clinical Nutritionist Lovneet Batra.

Orange, lemonade, or gooseberry juice and Guava can be incorporated in the diet. Celebrity chef and Padma Shri awardee Sanjeev Kapoor believes that in India, people can easily include gooseberry or ‘amla’ in their diet which is a low-cost superfood. It is not only rich in Vitamin C but also increases immunity.

Also Read: Why You Need To Take Iron Deficiency Seriously?

For vegetarians, beans, lentils, chickpeas, peas, soybeans are a great source of iron. Pulses are usually not a hit among children, but can be included in their diet, smartly. Talking about the same, Ms Batra says,

Lentils should be the go-to food if you are looking for iron-rich vegetarian diet. Daal can be added in the diet in the form of a daal-cheela, daal-idli and daal-rice.

For non-vegetarians, it is a tad easy to increase their intake of iron and phase out iron deficiency as heme iron, one of the essentials is found only in meat, fish and poultry products. Eggs, organ meats like liver, are also rich in iron.

It won’t be wrong to call seeds and nuts versatile. Just sprinkle them over a dessert, salad or eat them raw, they will accentuate the taste of the meal and parallely provide you nutrients. Not to forget, nuts and seeds are the best things to munch on and beat hunger pangs. You can resort to dried pumpkin seeds, pinenuts, cashews, pistachios, hemp seeds or sunflower seeds, among others.

Along with all this, experts suggest inculcating double fortified salt (salt fortified with both iron and iodine) in one’s diet; use it for cooking like regular salt.