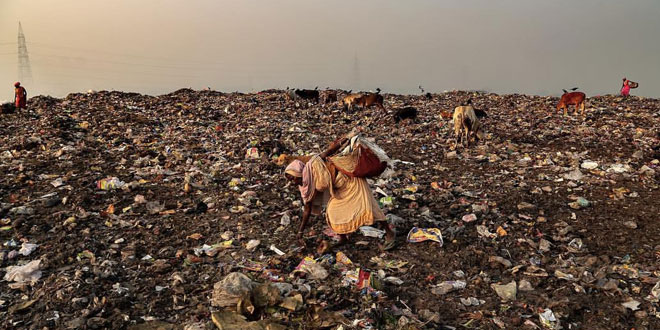 On September 1, tragedy struck Delhi when one of the country’s oldest functional landfills at Ghazipur, responsible for daily hosting of 3,000 metric tonnes of Delhi’s daily generation of 10,000 metric tonnes of garbage, caved in. The incident resulted in the death of two people and trapped several vehicles under the garbage debris, but most importantly, brought to fore the dangers posed by indiscriminate dumping of garbage on landfills. Ghazipur is not the lone landfill which was facing the danger of undergoing a collapse. Last year, toxic smoke choked Mumbai after the city’s largest garbage dump Deonar landfill caught fire. Several landfills across India are on the brink of similar breakdowns that can cause a waste crisis in urban metros. In Kolkata, the Dhapa landfill in the city’s eastern fringe is facing a similar crisis, as it continues to struggle and cope with the daily burden of city’s waste.

The Dhapa landfill has colonial history attached to it, as it was set up in 1941 when the British still ruled India. The landfill was spread across an area of 12 to 14 hectares back then and a garbage train would ply along the city’s main roads, collecting the garbage for disposal at the landfill. But waste generation in 1941 was minimal, as compared to today, when the city is generating 5,000 metric tonnes of waste every day. More than 4,000 metric tonnes of waste is dumped at the Dhapa landfill every day, which has become a sitting garbage mountain. When last measured by the Kolkata Municipal Corporation (KMC) in 2015, Dhapa had already crossed the dangerous height of 50 feet and exhausted its capacity to take in any more waste. Two years since the assessment, nothing has changed in terms of waste disposal in the city’s landfill, where garbage continues to be dumped daily in large amounts.

Dhapa crossed it safety limits ages ago but the KMC’s inability to find any alternative has resulted in regular garbage disposal on the site. If 80 per cent of a city’s garbage is dumped every day at a single site, it can be very well imagined what the status of the landfill will be in a few years. For Dhapa, it has been more than three decades, said environmentalist Subhas Datta.

Too Much Garbage, Too Little Space

The Central Pollution Control Board (CPCB) in its August 2008 report ‘Guidelines and Check-list For Evaluation of Municipal Solid Waste Landfills’ stated several norms to be followed  for both new and existing landfills. Among them, some primary directives were that any landfill area should be at least 150 acres, must be situated away from population and have a functional lifespan of 20 years. Like the existing landfills of Ghazipur and Deonar (Mumbai), Dhapa did not fulfill these categories and was long past its expiry date as the site had completed 20 years of functioning as a landfill in the 1960s itself. The current size of 23 hectares is too less for the landfill when compared to the amount of waste which is disposed of daily. In 2009 the KMC had attempted to acquire around 15 acres of land more in eastern Kolkata itself, but the deal fell off midway due to environmental concerns related to wetlands. Another landfill site at Garden Reach in south Kolkata which is 8 hectares in size receives about 100 metric tonnes of waste daily, is too little to share the city’s waste burden. 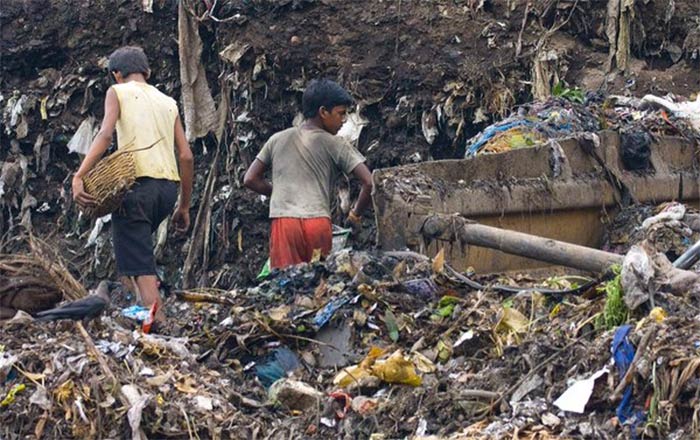 More than 4,000 metric tonnes of garbage is dumped into the Dhapa landfill daily

Dhapa’s size and location do not adhere to the CPCB guidelines of 2003 or 2008 but that has never been taken into consideration by the municipal corporation or the state government. The landfill has long exhausted its capacity to take anymore waste and its inception was not scientific at all, as the basic idea was to dump waste on a large and then uninhabited area. Now, the situation has gone out of control as Dhapa remains the only proper landfill in a city of millions, said Amit Dutta, Associate Professor of Civil Engineering at Jadavpur University and author of ‘A Comprehensive Study On Landfill Site Selection for Kolkata City.’

Uninhabited Then, Teeming With People Now

Landfills are toxic sites where the air, water and soil are all polluted due to the continuous disposal of untreated waste and garbage. This is precisely why CPCB guidelines state that landfills must be in areas away from population to minimise the toxic impact of waste on public health. Dhapa, which was uninhabited till the 1960s saw population increasing quickly ever since Bengal witnessed a steady flow of migrants from neighbouring Bangladesh, as well as the states of Bihar, Uttar Pradesh and Odisha. At present, Dhapa and surroundings are home to more than 30,000 people. A majority of them are ragpickers and waste collectors who make a living selling waste and scrap, while many are also into farming, growing and supplying green vegetables to Kolkata’s markets.

The average life expectancy for people residing in Dhapa is about 50 years. Those who work as garbage collectors do so without any safety equipment and  expose themselves daily to a poisonous mix of waste, toxins and germs. The air in Dhapa is nearly unbreathable and exposure to continuous stink has shown to affect their lungs and health in general, reducing life expectancy significantly, said Koushik Paul, a PhD student from Jadavpur University working on Kolkata’s urban waste crisis. 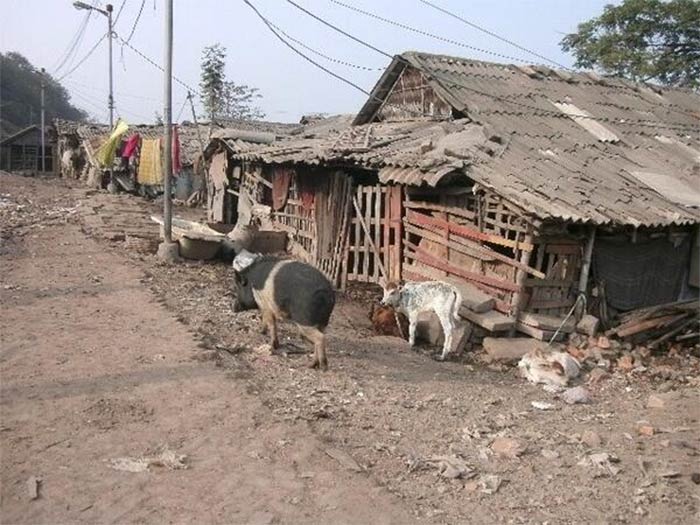 Dhapa is home to nearly 30,000 people who continue to live in deplorable conditions

The substantially big population at Dhapa is at daily risk due to the municipal corporation failing to come up with a waste management solution. Urban development projects on behalf of the Central and state government have failed to take into account the plight of numerous families living at Dhapa. Worse, garbage continues to be dumped in huge quantity in the landfill, endangering the living population. In monsoon, the site becomes worse as wet garbage becomes unstable and while walking, feet are often pulled into the garbage, and garbage trucks overturning themselves. Daily fires are a common occurrence, due to emission of extensive methane. But breathing the toxic fumes is the only choice the residents are left with. As daily life has turned into a struggle, Dhapa’s residents try figuring out how to live amidst mountains of garbage.

The Dhapa landfill issue is not a problem to be solved in a day. We have had several rounds of discussions with the KMC. We have also identified a spot in Rajarhat in North 24 Parganas so that waste from that area can be disposed there. However, designing a scientific landfill will take time and we are still figuring out what can be done to ease the problems of citizens of that area, said Niranjan Kumar, Special Secretary, Kolkata Metropolitan Development Authority.

The state government’s efforts to tackle the Dhapa crisis have been feeble at best, and lacklustre at worst. Dhapa, which is an extended part of the East Kolkata Wetlands, was given the recognition of being a Ramsar Convention site in 1999. The recognition gave Dhapa the status of a protected site but the Kolkata Municipal Corporation said that since it was not consulted before the recognition was bestowed upon Dhapa, it saw no legal bindings which could stop the civic body from disposing waste. The KMC also installed a mechanised composting plant with a capacity of treating 700 metric tonnes of garbage every day in April 2000 which became almost non-functional by 2014. The fate of the composting plant was perhaps the final knell on the landfill’s fate, as the little amount of garbage that was converted to compost daily, now gets added and sits atop the waste mountain.

The composting plant has unfortunately become non-functional due to non-maintenance. We are trying to get it up and running but continuous power supply is still a problem. Besides, the composting plant has broken down often in the last few years due to the volume of garbage that went in for processing. Unless we have an upgraded composting plant in place, the crisis will continue, said Bijan Das, Deputy Director, Solid Waste Management, Kolkata Municipal Corporation.

The state government is yet to implement the suggestions by COWI Denmark and Witteveen and Bos from Netherlands in 2013. The consultants were asked by the government of West Bengal to design a rehabilitation plan for the Dhapa landfill site. The KMC says that the recommendations suggested were difficult to implement as they involved removal and recycling of garbage while pausing disposal of garbage for some time. Since the city has no other landfill, putting a stop on waste disposal was not an option for the civic body.

Is There A Way Out For Dhapa?

Recently it was announced that the KMC would provide tax rebates to those who segregate and compost waste in their residences. This announcement was made to lessen the amount of daily garbage generated by the city, which would translate to less garbage transported to the landfill. But this does not translate into a long term solution as firstly the KMC is yet to come up with a concrete plan on the tax incentives initiative, and secondly participation related to segregating and composting alone cannot be expected to reduce a city’s daily garbage generation.

The existing amount of garbage in Dhapa must be cleared out using scientific process and treated simultaneously. Though time consuming, the process will ensure smooth clearance of the heaps of garbage. As recommended  by the external agencies, the KMC can identify small temporary spots for garbage disposal. It is also highly important that the whole landfill is reconstructed using scientific methods such as base made of clay, drainage layers constructed of soil and vegetative layers to minimise soil erosion. Kolkata’s dependency on Dhapa cannot be questioned but to avoid a repetition of last week’s incident at Ghazipur, the civic body and the state government must act and act fast to save not only the city’s waste scenario, but thousands of Dhapa’s residents as well.

Also Read: No Dumping: Udupi District Aims To Get Rid Of Its Landfill Through Zero Waste Policy