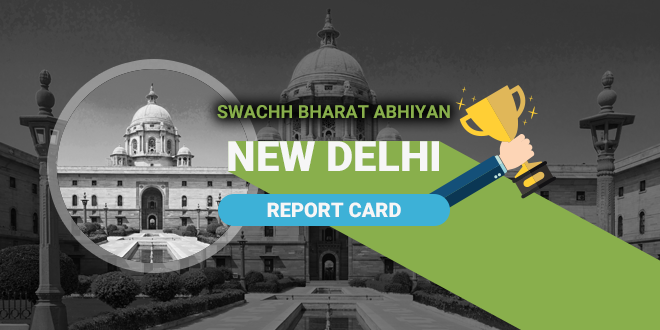 New Delhi: In the Swachh Survekshan-2017, three out of the four municipal corporations of Delhi failed to make it even in the Top 150 clean cities of the country. Of the 434 cities and municipalities covered by the survey, the East Delhi Municipal Corporation, the South Delhi Municipal Corporation and the North Delhi Municipal Corporation were ranked 196, 202 and 279 respectively. However, New Delhi Municipal Council (NDMC) managed to score seventh position, slipping three notches from the fourth position it bagged among 73 cities in Swachh Survekshan 2016. What are the reasons behind this poor performance? Abundance of unplanned colonies and slums without proper sanitation, along with improper sewage treatment facilities and waste management concerns are among the major reasons. Out of the total Delhi population of 1.64 crore as per 2011 Census, over 18 lakh people live in slums, who defecate in around 259 open defecation spots as identified by Delhi Urban Shelter Improvement Board (DUSIB), the agency under Delhi government responsible for improving the quality of life in the slums. These slum dwellers not only require toilets to stop defecating in the open but also need to be educated about safe sanitation practices, and to use the toilets provided. But the eradication of open defecation in Delhi has only been short of target as a huge number of people (almost 65 percent till 2015) defecate in the open, especially alongside the railway tracks, due to non-availability of toilets. It is not that government both in the national capital and at Centre is not aware of the situation. In June 2017, the Union Development Ministry stressed on the dire need to make Delhi open defecation free by October 2017. 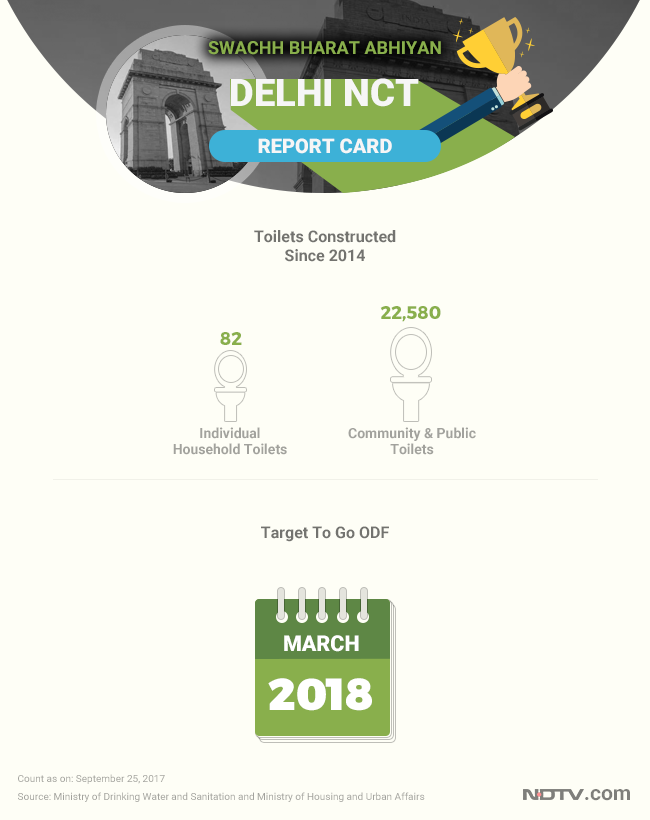 So what all has the government and its machinery done to address the problem of open defecation since the launch of Swachh Bharat Abhiyan in 2014? According to the government data, only 82 individual household toilets got constructed in the city along with over 22,580 community toilets in the last three years. Over five lakh residents in the national capital need the toilet facilities to stop defecating in the open. Considering Delhi’s status as the national capital, this situation is worrisome.

However, Delhi Chief Minister Arvind Kejriwal in June 2017 assured that all 675 Jhuggi Jhopri (JJ) clusters in the city will be made open defecation free by March 2018, and there will not be any shortage of funds for this work. Considering the major problem is of space to construct individual household toilets (IHHLs) and community toilets in slums, especially in the densely populated areas close to the railway lines which don’t even have sewer lines, the Chief Minister went on to seek the help of then Minister of Urban Development Venkaiah Naidu. Mr Kejriwal in July 2017 met Mr Naidu and requested him to give Railways and DDA land for construction of toilets to help make Delhi ODF.

Aware of the need to construct community toilets on priority for people living in slums and to make the national capital ODF as per the target, the Delhi government in the recent months has escalated the work of toilet construction. Given the space constraints to construct IHHLs, emphasis is being laid on building community or public toilets so large number of people can use the facility at any given time.

Challenge of ‘no objection certificate’ (NOC) for toilet construction

DUSIB has been entrusted with the task of building community and public toilet seats, the requirement of which is assessed to be 27,000 toilet seats of which 22,580 have been made available so far. While doing their work, DUSIB officials faced a few hurdles in terms of obtaining the NOC to construct toilet on the land owned by different agencies. But the agencies part of the Centre’s Swachh Bharat Mission addressed these concerns. “Since these 675 slums are located on land owned by various agencies, getting no-objection certificates (NOCs) for the construction of toilet complexes had been a challenge. However, in accordance with the Swachh Bharat Mission, the agencies under it, including the Railways and the Delhi Development Authority, have been issuing NOCs faster,” said DUSIB official. Notably, DUSIB also provides the mobile toilet vans on rental hire basis for public/community gatherings, public shows, social or religious functions etc. at locations where there are limited toilets to serve huge flow of people. This sort of facility help organisers of such functions to limit the possibility of open defecation due to non-availability of toilets.

A look at what the municipalities of Delhi have done so far:

According to a report by Centre of Science and Environment and the data available on the Swachh Bharat Urban site, the municipal corporations of Delhi made negligible efforts to improve the sanitation scenarios in the inaugural year of the Swachh Bharat Abhiyan in 2014. It has been noted that not a single toilet construction was done in the year 2014-15. And in the last three years, merely 82 toilets have been constructed. According to Municipal Corporation of Delhi (MCD) officials, the main reason behind this low number is the rejection of false applications and lack of adequate space along with improper sewage system to construct IHHLs. In the last five months, the three municipal corporations of Delhi together have rejected over 70 percent of the total IHHL applications.

“People are submitting incorrect applications in an effort to encash the grant of Rs. 4000 being provided by the Central government. Applicants get this money once their application to construct the toilet gets approved by the municipality,” said an official.

While clarifying this concern, the civic bodies stated that they were not able to utilise Central funds because they are themselves short of funds and unable to take care of their share needed for the construction of toilets. Unless the respective municipalities have the total funds, work under the Swachh Bharat Mission will move at a snail’s pace.

“The clause of the Swachh Bharat Mission states that for civic works, 20 per cent is the Centre’s share and 6 per cent is the state’s share. The rest is to be borne by the municipality. We did not have enough funds of our own to spend on toilet construction and on other works as per Swachh Bharat Mission guidelines,” said Manish Gupta, Commissioner, South Delhi Municipal Corporation.

Even as the three municipalities were working to make the capital ODF, all the three municipal corporations in a recent welcoming move provisioned for women and children to access toilets of any hotels and restaurants for free. The municipal bodies in collaboration with hotelier associations initiated this step as part of its efforts to boost Swachh Bharat Abhiyan campaign in the city.

Municipal Corporations are working on stringent deadlines to make their civic areas ODF:

Mayor Kamaljeet Sehrawat in May directed the South Delhi Municipal Corporation (SDMC) to make the civic area open defecation-free (ODF) by June 30, 2017. SDMC, which by then had already declared 92 of its 104 wards open defecation free, is facing problem in eradicating the practice from the rest of the wards. However, to address the problem, SDMC decided to install mobile toilet vans to eradicate open defecation. “We also requested DUSIB and the Railways to speed up construction of toilets along railway tracks to ensure that people did not have to defecate in the open. But acquisition of land for toilet construction is a complicated process involving multiple authorities. Hence, it was decided that to meet the ODF target, mobile toilet vans would be a speedier and equally effective measure,” said Mr Meena. And to prevent open defecation, the South Delhi Municipal Corporation also issued a circular authorising its health and sanitation officials to fine the violators Rs. 50 on the spot.

On the other side, the North Delhi Municipal Corporation declared 90 wards open defecation free in July. In remaining 14 wards, the civic agency has proposed to construct nine community toilet facilities.

“The work has already been initiated and expected to be completed by October 2017. Besides, Delhi Urban Shelter Improvement Board has promised to construct 2241 seats toilet facilities December, 2017,” said Preety Agarwal, Mayor, North DMC.

East Delhi Municipal Corporation also stepped up its sanitation drive and aims to make the civic area ODF by October 2, 2017. Of the total 64 wards, 61 wards have already self-declared themselves as open defecation free and there are enough community toilets within a distance of 500 metres for residences that do not have individual toilets, according to East Delhi Municipal Corporation.

“Critical areas from ODF point of view have been identified and strict vigil is being insured. Civil Defence volunteers are being deployed to educate and prevent people from defecating in the open,” said Mohanjeet Singh, Commissioner, East Delhi Municipal Corporation in August 2017.

Notably, the 42.7 square kilometres of area, covering Lutyens’ Delhi, besides Connaught Place and residential areas like Moti Bagh, INA Colony, Jor Bagh, Kidwai Nagar and others, under the New Delhi Municipal Council remains the only open defecation free zone in the city. “Ever since the launch of Swachh Bharat Abhiyan, we have constructed over 330 community toilets and more are under construction,” said M.S. Sehrawat, Spokesperson, New Delhi Municipal Council.

Yamuna, which is considered to be among one of the most polluted rivers is plagued by both human and industrial waste. Most of slum dwellers living along the river banks relieve themselves in the bushes and vegetation. They end up doing so due to either non-availability of public toilets nearby or if the available toilets are there, then these are either not functional or already too dirty to be used.

Also Read: How Yamuna Went From One Of India’s Holiest To One Of World’s Dirtiest

“The order is a welcome one for us who have been fighting the Yamuna cause for many years. We often encounter people defecating in the open and the local police reluctant to do anything about it. The imposition of a fine will ensure that people are discouraged to defecate along the Yamuna’s banks,” said Brij Khandelwal, Environmentalist.

In addition to constructing adequate number of toilets, the bigger worry for the government and for municipal corporations would be to ensure the proper maintenance of the toilets so that slum dwellers who have struggled to have access to safe sanitation, should keep using the available toilets and not walk off towards the railway lines to defecate in the open.

Can Union Territories Of India Achieve The Tag Of Open Defecation Free By March 2018?