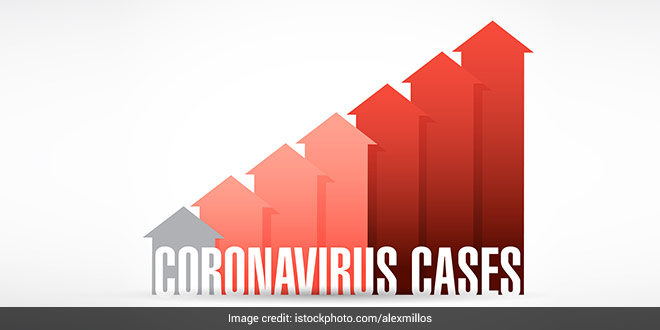 New Delhi: The last week of August saw a 35 per cent increase in coronavirus cases as compared to the previous week, with 30 to 40 per cent of the new cases coming from the same family, according to an analysis done by the Delhi government‘s Health Department. The Health Department analysed the cases in August, which saw a spike, and found that the infection was spilling over to rural and middle-class pockets and there are increasing incidences of cases in migrant habitations.

Also Read: Can’t Say It Is A Second Wave: Health Minister Satyender Jain On Rise In COVID-19 Cases In Delhi

The government’s analysis also found that there is a lack of adherence with coronavirus appropriate behaviour by the public which might be responsible for the spike. The other reasons it listed for the spike were the festive season, late testing by COVID suspects, cross-infection, return of migrants and unlock measures. Fresh and active cases have shown an increase in the last several days, with Chief Minister Arvind Kejriwal announcing last month that COVID-19 tests in Delhi will be doubled to 40,000 per day within a week as there has been a marginal increase in the number of cases. In the last week of August amid a spike in cases, CM Kejriwal had warned people against complacency and said that more and more people should get themselves tested if they observe coronavirus symptoms.

Due to overconfidence, some people think they will recover even after they have symptoms. They do not realise that if they do not get tested in time, they end up infecting many people around them eventually. People can avail testing for free in any government hospital or government dispensary, he said.

He asked people to get themselves tested, wear masks, and practice social distancing. Even health experts pointed out that the fear of contracting coronavirus has reduced among patients, and they said they were seeing lower footfall in hospitals. Manoj Sharma, Senior Consultant, Medicine and Incharge at Medeor Hospital Qutab Institutional Area, said the hospital witnessed lesser footfall of patients for coronavirus tests on days of incessant rains which led to flooding in some areas and on festivals or holidays like Independence Day, Janmasthami.

Also Read: COVID-19: Delhi Government’s Next Round Of Sero-Survey Begins; To Be Done Ward-Wise

Earlier, there was a lot of panic and even for minor symptoms people were coming to hospitals. But now, they think that if they have minor symptoms they will recover. There is some taboo attached to testing. They think that authorities will put up stickers outside their home and their neighbours will come to know, he had opined.

Fear has reduced among people and those with mild symptoms feel they will recover. Only people with severe symptoms come for tests, she said.

According to Dr BL Sherwal, medical director of Rajiv Gandhi Super Speciality Hospital, testing has increased in the last three to four days.

People should not relax. They should always take precautions like sanitising their hands, wearing masks whenever they are in a public place. People are following these norms but still there is complacency. They have to mend their ways. There may be an increase in cases due to the Metro opening up but ultimately the government has to be ready for it, he added.